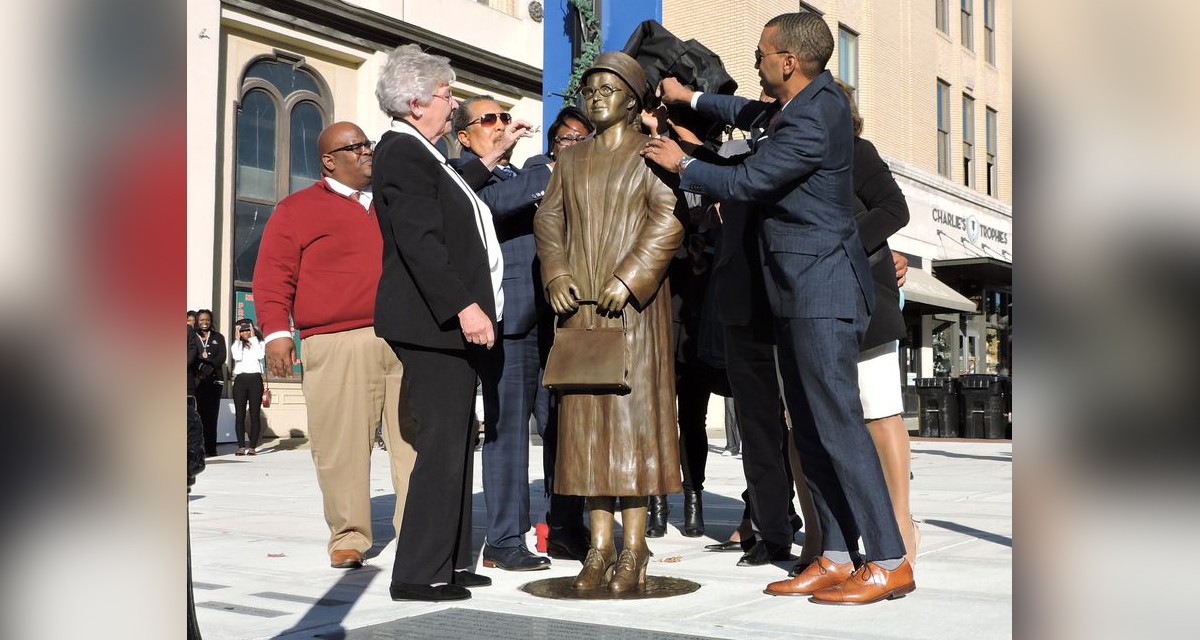 Montgomery, Ala., city leaders surround the statue of Rosa Parks unveiled Dec. 1, 2019, 64 years to the day after Parks was arrested for refusing to surrender her seat to a white passenger. Photo from the City of Montgomery.

The statue marks the site where Parks stepped onto the bus where she refused to give up her seat to a white passenger and was arrested. The unveiling commemorated the date of the incident: Dec. 1, 1955.

The city also unveiled two historic markers commemorating the landmark U.S. District Court case that paved the way to desegregate public transportation across the nation. In November 1956, judges hearing Browder v. Gayle ruled that segregation on Montgomery’s buses was unconstitutional. The U.S. Supreme Court later affirmed the decision effectively overturning Plessy v. Ferguson, which had made “separate but equal” the law of the land in 1896. It would take another eight years and an act of Congress to take the decision nationwide. 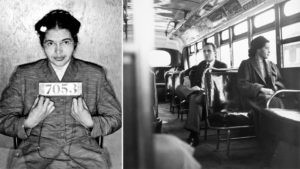 Rosa Parks in her 1955 booking photo and on a Montgomery bus.

Fred Gray, the lawyer who defended Parks, was on hand for the unveiling along with many other civil-rights heroes and about 400 others, the Montgomery Advertiser reported.

“For the city officials, from the city and the county, to be able to honor Mrs. Parks and honor those plaintiffs, and even more importantly to honor the 40,000 African American men and women who stayed off of the buses for 382 days, it is indeed a step in the right direction,” Gray told the Advertiser.

Parks was a civil rights activist long before that fateful day in 1955. She was secretary of the Montgomery chapter of the NAACP, and she was prominent in the community. Her refusal to obey the bus driver’s order to move to the “colored” section of the bus was not the first time an African American refused the order nor the first arrest for civil disobedience, but the NAACP felt she was the best person on whom to base their case. That case eventually got bogged down, but her actions and willingness to become a controversial national figure inspired thousands of African Americans to boycott the buses for more than a year.

Both the Montgomery bus boycott and Parks became important touchstones for the Civil Rights Movement, and she is often referred to as the mother of the movement.