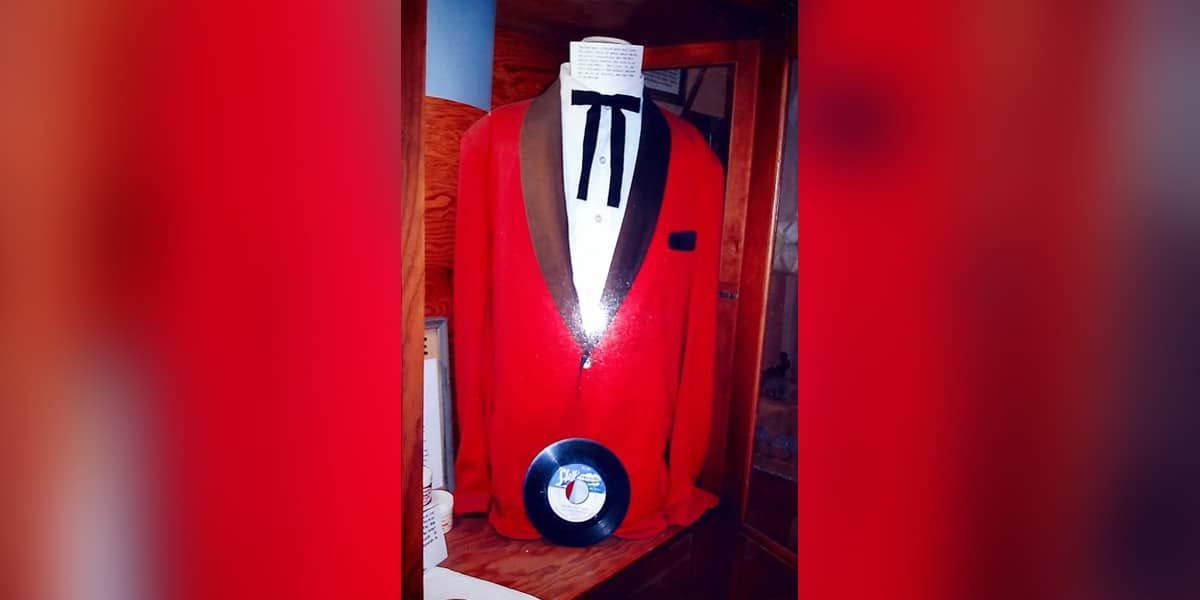 A red coat, worn by one of the Red Tops, is displayed along with a copy of “Swanee River Rock" in the Old Court House Museum. (Photo courtesy Gordon Cotton)

“Where they rock all night and go to the light of day …” The clear tenor voice sang in a smooth and easy style as the sound of the saxophone section blended with the background and an upbeat of the drums and trumpets signaled a surge into another chorus of “Swanee River Rock.”

The jolting rhythm drew people to the dance floor like a magnet, and couples swayed to the music when the Red Tops played.

Dressed in red blazers, blue trousers, white shirts and black ties, the 10-man orchestra, the most popular in Vicksburg for decades, made their debut June 20, 1953, at Sequoia Hills, a Bovina nightclub. Soon, their fame had spread so that many thought a dance wasn’t worth attending unless the Red Tops were playing — and their fame drew fans from hundreds of miles away. Their date book read like an atlas of towns in Mississippi and Louisiana. At the pinnacle of their success, they were booked as far as a year in advance.

While most band members sat as they played, the Red Tops stood, for they put on quite a musical show with special numbers like “The Baseball Game,” “Trying To Blow My Horn” and another dubbed “The Drunk.” 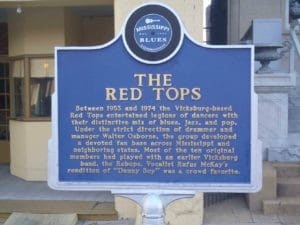 But all got quiet, the dancing stopped and the music was muted, when Rufus McKay sang “Danny Boy.” The late Walter Osborne Sr., manager and drummer for the band, recalled, “Girls in evening gowns would come and sit on the floor in front of the bandstand. Dancers would crowd around. Tears would come to people’s eyes.”

McKay, who later sang with the Ink Spots, would end the number is high falsetto notes.

Soon after their debut, they were playing at other clubs — The Top Hat, Rogers Ark, the Wagon Wheel and Tom Wince’s Blue Room. They quickly became a must for dances at most Deep South universities.

Band members never took sheet music with them when they performed — they memorized the music. When the band formed, they had an attorney draw up a contract with strict rules and regulations. There were 10 members, and all had regular, full-time jobs. Original members were Willard Tyler, Joe Custard, Jim Bosley, Jessie Hayes, Walter Osborne, Rufus McKay, Thomas “Doc” Raymond, Napoleon Fleming, Louis Spencer and Curtis Dunning.

Some of them had been with The Rebops, a small orchestra that played on Morriseys’ Showboat, docked on the Louisiana side of the canal where liquor was legal. The Showboat lured scores of people who crossed from Vicksburg on two small boats, Haig I and Haig II. There was a desire for a larger band, resulting in the Red Tops, but it all started with the Rebops.

Standing up to perform began one night at the Country Club when all the chairs were removed. It was exciting at the time, for band members had a chance to move around and do humorous things when they played.

About 1957 the Red Tops made their only record, “Swanee River Rock,” which was on the Sky label out of Greenville. It was a smash hit all over the region, and it led to invitations to play in Las Vegas, RCA Victor made inquiries, Stepin Fetchit wanted the Red Tops to join him and there was even talk of an appearance on “The Ed Sullivan Show.”

A second record was planned, but to do it, the band members had to join the musicians’ union, which none of them wanted to do. All were professional musicians, but they decided to drop the idea and remain in Vicksburg.

Osborne reflected that rock groups like The Beatles replaced bands like the Red Tops. “Long hair, big beards, all that stuff,” he said. “Where we’d play for $450, they’d get $2,000.”

The Red Tops were also growing older, so they disbanded in the mid-1970s.

“We played at a time when people enjoyed themselves,” Osborn said.

The name Red Tops, though, is still magical for those who remember when they would “rock all night and go into the light of day.”

July 3, 1974: the deadliest day in the history of the Vicksburg Fire Department.