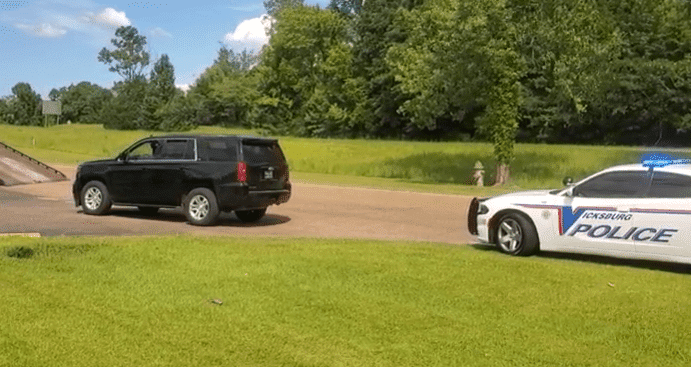 At 12:15 p.m, Tuesday, a gun was reported stolen from a vehicle at USA Pawn on Warrenton Road. Cameras captured a suspect in the act as well as his partner inside the shop at the time. It also captured the suspects’ black Tahoe with Texas plates with a third suspect.

The victim of the robbery was returning to the pawn shop at 2:15 p.m.

On the way he saw a black Tahoe on the side of the road in front of the Super 8 on North Frontage Road having mechanical difficulties. The victim pulled into a parking lot to get a closer look and recognized the individuals from the camera footage. He then called 911.

The suspects noticed the victim and one of them approached his vehicle, at which point the victim warned the suspect that he had a gun.

The sirens of approaching officers responding to the call scared the suspects off. One left in another vehicle, one ran south on foot, and one ran into the Vicksburg Military Park on foot.

A search of the abandoned Tahoe revealed a stolen 243 Savage that had been in the victim’s family for generations.

One suspect is now in custody.

McCroy failed to stop the vehicle he was driving and led the officer on a brief chase. After he stopped, the officer found that he was in possession of a handgun. He arrested McCroy shortly after midnight Sunday and charged him with possession of a firearm by a felon.

McCroy appeared before Judge Penny Lawson in Vicksburg Municipal Court Sunday, where she gave him a $75,000 bond and bound him over to the Warren County grand jury.