The 9th grade class of River City Early College in Vicksburg worked to raise funds for several months to provide ballistic vests to the police K-9’s who serve us.

In a well-attended ceremony at the Vicksburg Police Department, the students presented the vests to law enforcement K-9’s. Mary Claire Lovins, 9th-grade class president and daughter of Angela Wright Lovins, presented the vests on behalf of her classmates and educators at the RCEC. 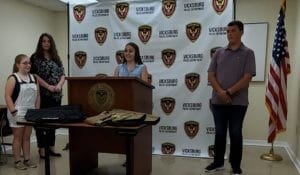 The project came about after a discussion among the students of what they could do to help the city. “They did it on their own,” said educator Kayla Sorrels. “They created it, figured out how to fund it, and then went out and did it.” 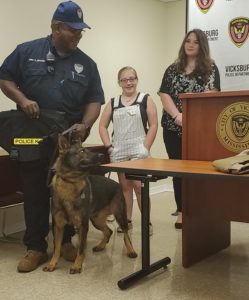 The K-9s present were Thor, Heidi, Sassy and Ceasar. “These K-9’s are the hardest working members of our community,” Vicksburg Sheriff Martin Pace said. “They will work all day and night without a break.”