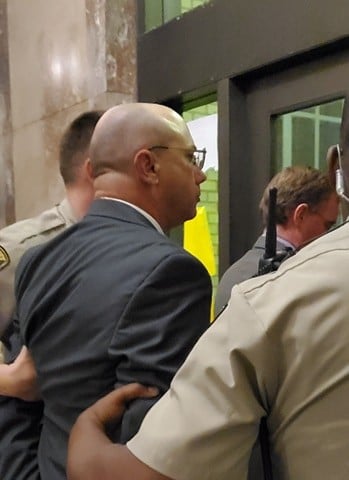 A Warren County jury of eight women and five men deliberated late into the night on Thursday to find Methodist preacher Troy Anthony Piccaluga guilty on two out of three counts of statutory rape and sexual battery.

The defendant, Troy Anthony Piccaluga, took the stand Thursday and faced District Attorney Ricky Smith in a combative testimony. At one point, an angry and defensive Piccaluga asked Smith to answer his own question. Piccaluga rejected Smith’s implication that he was “grooming” one of the victims to be sexually compliant.

After the emotional exchange, closing arguments began with Smith opening. The defense attorney, Mike Bonner, then succinctly laid out his case in a convincing manner with several of the jurors seemingly pliant to his calm and smooth presentation that included dramatic and pointed moments.

Assistant DA Branan Southerland then presented the rebuttal with a strong accounting of the events and facts as presented the prosecution. Smith finished by playing audio of a phone call between Piccaluga and the 14-year-old victim.

“I love you. I miss you,” Piccaluga said in the audio.

Judge Toni Terrett sent the jury to deliberate at 6:10 p.m. by after giving a lengthy list of instructions. A little over three hours later, the jury announced to the judge they were hung and could not reach unanimity.  The judge called them to the courtroom, instructed them to keep deliberating and sent them back to the jury room. Forty-five minutes later, at 10:15 p.m., the jury again announced they were unable to reach a unanimous decision.

Judge Terrett once again called them into the courtroom.  The jurors were visibly under a strain at this point with one juror openly weeping and others looking tense. The judge sympathetically reminded them of their duty and directed them to once again try to reach a consensus.

Just before 11 p.m., the DA entered the courtroom followed by his team. A few minutes later the jury was called in and the announcement was made that they had reached a verdict.

Seven deputies and Warren County Sheriff Martin Pace surrounded the area where the judge, the lawyers and the accused sat. The family of the defendant and the families of the victims were seated just across the aisle from each other. It had been an emotional week and the sheriff wanted to ensure law and order were maintained in the courtroom.

The jury was dismissed as a silent Piccaluga stood, seemingly stunned by the decision. He was emotionless as deputies led him down the stairs and out the door to the jail across the street.

Troy Anthony Piccaluga, 50, is led to the Warren County Jail

“It meant a lot to all of us in the [District Attorney’s] office to make sure we got justice for those young ladies,” District Attorney Smith said in a live report with Tommy Parker of The Vicksburg Daily News.

“There are other people who have also suffered because of this,” Smith added, noting the emotional tone of the evening and the families and communities affected by the charges and subsequent trial. “The family of Mr. Piccaluga, he has a daughter who was friends with these individuals, and she’s lost, too. She lost a father to this conviction.”

Piccaluga will be sentenced March 27 following a pre-sentence report from the Mississippi Department of Corrections.