Firefighters from Vicksburg and Warren County came to the aid of Port Gibson firefighters to extinguish a blaze in the historic Trace Theater on Friday evening.

The theater, now a mere shell, is located on the corner of Market and Common streets in downtown Port Gibson.

Fearing the fire would spread before his crew could put it out, Port Gibson Fire Chief George Hudson made a mutual aid request through Claiborne County Emergency Management Director Marvin Ratliff, Sr. to Vicksburg and Warren County just before 7 p.m.

“We put a lot of water on it fast, but we were becoming fatigued and were concerned about the fire spreading the nearby buildings,” Hudson said.

Port Gibson firefighters were able to contain the fire but didn’t have the equipment to go in from the roof, which had collapsed, to ensure the fire was completed extinguished.

The request was made through a system set up by the Mississippi Emergency Management Agency in 1995. It provides a way for cities and counties to request and receive help from each other when local resources are exhausted.

Together, firefighters battled the blaze for nearly five hours. 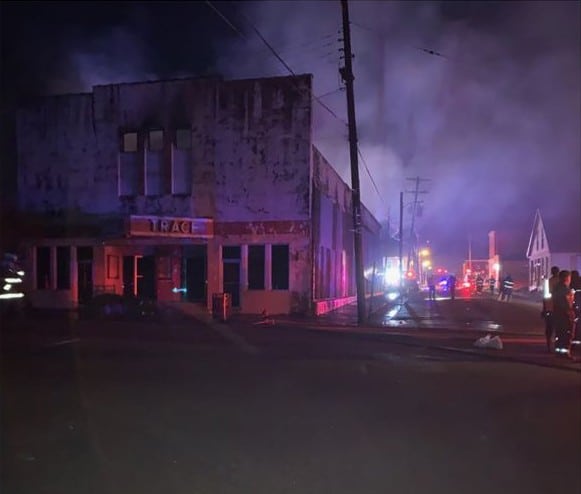 No one was seriously injured as a result of the fire, although one Port Gibson firefighter suffered an injury to his hand that required stitches.

“My biggest fear became collapsing the structure and spreading the fire,” Hudson said. “We are working with older equipment that was performing well, but we needed a hand, and Vicksburg/Warren County came to help. We are grateful for their assistance.” 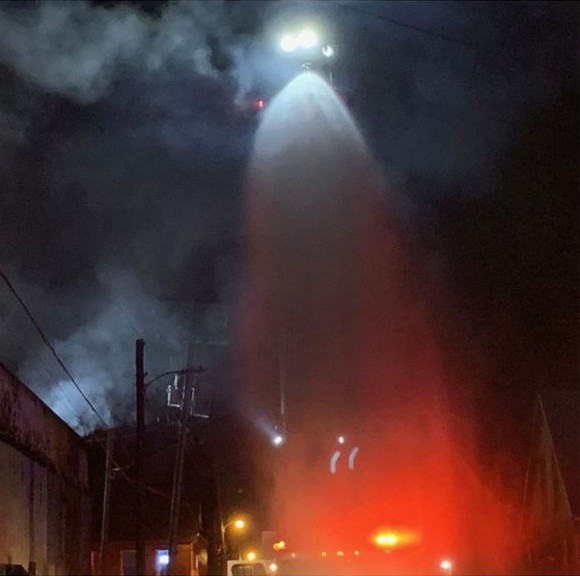 Hudson also commended the Port Gibson Police Department and the Claiborne County Sheriff’s Office for establishing a perimeter around the structure in just a few moments after the fire began. Sheriff Edward Goods was on scene making sure that onlookers stayed at a safe distance from the blaze and the firefighters.

Around 8:30 p.m., embers ignited an isolated fire in a vacant structure across the street from the theater on Common Street. The wood-frame building last housed a restaurant. Firefighters forced their way in and removed exterior siding to make certain there was no spread of fire through the structure.

In structure fires, the danger of a fire rekindling is a real threat.

“We had to go back and put out some hot spots during the night,” Hudson said.

The chief plans on keeping a watchful eye on the theater building for the next 72 hours to ensure it doesn’t rekindle again. Hudson owns the vacant storefront that shares a common wall with the historic theater.

He also plans on flying a drone later today to get an aerial view of the damage. The Vicksburg Daily News will bring you that video when it becomes available to us.