Pablo Diaz, president of the Vicksburg-Warren County Economic Development Partnership, outlined many of the plans undertaken with the Warren County Port Commission during Monday's Board of Supervisors meeting. (Photo by Thomas Parker)

The Warren County Port Commission and the Vicksburg-Warren Economic Development Partnership have several expansion projects in the works for Vicksburg and Warren County.

During Monday morning’s Warren County Board of Supervisors work session, Pablo Diaz, president of the Partnership, and Don Brown, president of the Port Commission, detailed the status of several of their ongoing and upcoming capital projects.

Brown extolled the addition of Love’s Truck Stop at Ceres. He added that a truck wash was in the works, but that the COVID-19 crisis had slowed progress on that front.

Diaz reported that the new water tank was almost complete at Ceres and he anticipates taking a walk-through this week. Contractors are putting the finishing touches on several small items before turning it over to the Culkin Water District for use.

Additionally, he gave a status report on repairs to the sewage lagoon maintenance work at Ceres. He explained that all four cells are being reworked, and workers only do repairs on one cell at a time so as not to interrupt sewage services to the industries in the area. 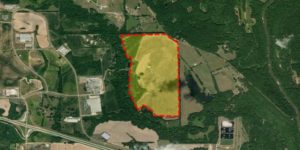 Expansion of Ceres Boulevard would provide access to this 174-acre parcel of land.

He also explained to the board the Commission’s plans to extend Ceres Boulevard between Tyson Foods and United Brands. This would allow access to a 174-acre tract that would be ideal for a larger industrial manufacturer.

Both Brown and Diaz contend that the larger tract is more attractive to development as opposed to the 35-acre to 40-acre tracts available in other areas of the complex.

There are numerous potential funding sources available for the road project, Diaz said, which is estimated to cost approximately $900,000. District 2 Supervisor William Banks questioned Diaz on the need for the road and asked who would be responsible for maintaining it following completion.

The Port Commission has instructed County Engineer Keith O’Keefe with Neel-Schaffer to provide a plan for building the road. The county would have to accept the road before taking over maintenance after completion.

Diaz also reported that the Port Commission is seeking to upgrade the May Warehouse located on Haining Road at the Port of Vicksburg. He stated that the roof needs repair along with improvements to electrical, lighting and sprinkler systems. Once complete, the warehouse could be leased to a new industrial tenant or possibly to Watco, an adjacent tenant, which has rented the facility in the past for additional storage.

Finally, Diaz reported that he has a Tuesday meeting on the potential of a new Mississippi River port in Vicksburg. He expects an announcement within the next few weeks regarding the feasibility study undertaken last year in conjunction with the Mayor’s office.