Pearl River crests at 36.7 feet as agencies begin to move into recovery mode 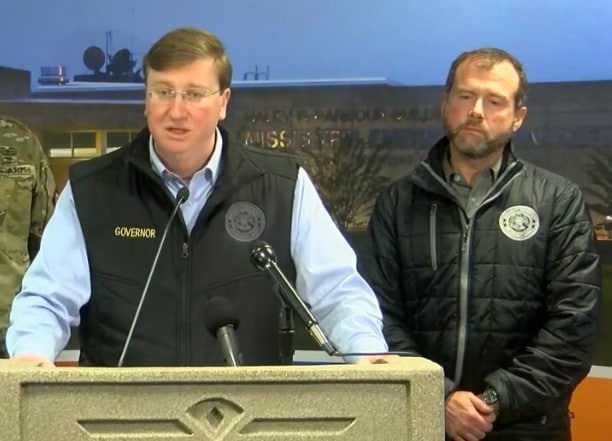 Mississippi Gov. Tate Reeves this morning praised the people of the Mississippi Emergency Management Agency and other state and local agencies for their response to the Pearl River flooding.

The river crested Monday morning at 36.7 feet, Reeves said at a press conference.

At under 37 feet, the crest is more than a foot less than the expected crest of 38 feet. Nonetheless, some areas in Northeast Jackson and Rankin County reported a 38-foot river in the Highway 25/Lakeland Drive area north to the Ross Barnett Reservoir dam.

The governor also gave praise to the people of Jackson who heeded the flood warnings. With a total of 16 rescues and no reported injuries, Reeves indicated that the situation could have been far worse if people had ignored those warnings. Last night, 24 people stayed at the Jackson shelter.

About 1,500 homes and businesses near the Pearl are still inundated or are threatening to flood this morning.

“All immediate needs and immediate requests are being fulfilled,” Reeves said, as area agencies begin to move from disaster response to recovery.

BREAKING: As of 10am Monday the Pearl River in Jackson is *cresting* near 36.7 feet. The river did reach a max height of 38 feet between the Spillway & Lakeland Drive according to the NWS. Major flood stage will continue for the next 48hrs. https://t.co/Ty7sCDDTgX @WJTV #MSwx pic.twitter.com/9m4PKVXrXs

MEMA Executive Director Gregory Michel said it’s vital now that MEMA can gather as much data as possible to update its flood maps. The area has seen a good deal of construction in the Pearl’s flood plain since the last big flood in 1983, making it vital that the data is updated accurately to prepare for future flood events.

“As we move into the current phase into recovery, accurate data will be critical,” Michel said.

“Residents can self-report,“ through tool on the MEMA website, Reeves said, and Michel reiterated the importance of affected residents reporting damage including submitting photos.

Although the floodwater is expected to recede quickly, Reeves also emphasized that this is not the time to return to flooded homes.

“We, as a state, are not in the clear, yet,” the governor said, adding, “This is not the time to run back to your house,” until authorities give the OK to do so.

It’s likely that there will be infrastructure damage to area roads, pipes and other systems as well. Electricity has been cut off to homes affected by floodwaters.

As the water moves downstream, counties to the south are on alert and preparing their emergency responses. Of special concern is the City of Columbia in Marion County, Reeves said.

Reeves also emphasized that people should not play, drive or walk through flooded areas. “We strongly discourage anyone from getting in or driving in the water,” Reeves said, saying that the water could have strong currents and that it’s not “100 percent clean.”

“As always safety and security are the first priority,” Michel added.