An overflow crowd of nearly 200 residents showed up to talk about the future of Vicksburg's animal shelter. (photo by Kami May)

A standing-room-only crowd of nearly 200 residents met to discuss the future of the Vicksburg Animal Shelter during a public forum at the Robert Walker Annex Building Tuesday evening.

Mayor George Flaggs Jr.’s hope for the meeting was to update the city of the plans for a possible new shelter and take comments from the public in attendance. Going into the meeting, the Board of Mayor and Aldermen had proposed to increase sales taxes by 2 percent for capital improvements, which the mayor did not want to do.

“I have not raised nor voted to raise taxes in the 33 years I have been a politician,” Flaggs said. “I have every intention in running this city without ever making a tax increase, but we can’t have everything and expect taxes to stay the same.”

Flaggs said an animal shelter is just one of the many things Vicksburg needs, mentioning a new fire station, paving roads and redeveloping the downtown riverfront.

Shelter Director Kacie Lindsey shared a list of what she hopes to have in a new shelter. The 50-year-old structure was converted from a Valley Mills factory—which, ironically, made dog and cat food—to the facility we know today. The Vicksburg Animal Shelter is located in the heart of the Kings community, which has had annual flooding since 2011, and Lindsey hopes to have a facility out of the flood zone. She also mentioned that the shelter is outgrowing the current facility and it has forced staff and volunteers to place dogs and cats in the same room.

“Cats being in the same room with dogs causes a very stressed cat (and) that will cause the cat to get sick very quickly,” Lindsey said.

The shelter does not have a quarantine area for sick dogs, which potentially spreads diseases to healthy dogs. What a sick dog doesn’t spread, the bacteria in the floor will.

“The floors are not sealed and contain parvo,” Lindsey said. “There is not a proper drainage system on the inside, so there is just standing water collecting bacteria that builds up over time.”

Lindsey said she would also love to have an intake room to assess animals for illnesses or injuries.

Lindsey, along with Community Development Director Jeff Richardson and North Ward Alderman Michael Mayfield, who is over Public Works including the animal shelter, visited a humane society that just recently opened in Greenville, Miss.

“We went to look for a design and see how much it would cost to build one in Vicksburg,” Richardson said.

The cost of the Greenville facility was $850,000 cash. It could have cost much more except for large numbers of in-kind and monetary donations.

“They got the building built for almost free. The plumbing was in-kind—HVAC, decorations and cabinets—all in-kind,” Richardson said.

A voice from the crowd yelled, “What about grants?”

“Grants are not what they used to be,” Mayor Flaggs answered. “Grants want projects that are shovel ready. Brick-and-mortar grants don’t exist for animal shelters anymore.”

“If we want the shelter I think we want, we are going to have to pay for it,” he added.

Lindsey also chimed in. “We have issues getting grants and assistance because we are not a 501(c)(3) (nonprofit),” she said. “We are a municipality, so that stops us from getting a lot of stuff that the Human Society or a rescue shelter would get.”

“We got on calls to trap and pick up animals,” Richardson said. “We are also involved in court cases, so it’s not just a pet housing mission. It’s an enforcement mission.” 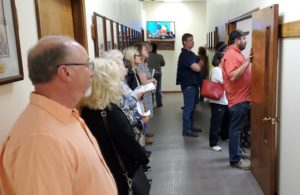 The crowd spilled out into the hallway and a nearby training room. (photo by David Day)

When the floor was opened to public comments, Vickburg resident Marilyn Terry was ready. She came with brochures, posters and, most importantly, outside-the-box ideas for funding.

“I think we need to work together as a community to make this shelter what it needs to be,” Terry said. “We can’t always rely on the city to do everything.”

One of Terry’s ideas was using a custom dog-kennel company based in Lancaster, Penn., called The Dog Kennel Collection. The company offers Amish-made commercial kennels for animal shelters.

“Everything is customizable, and they have a 30-year guarantee. The cost is $113,645 for the main part and an additional $66,000 for a waiting area and isolation,” Terry said, saying the estimate is based on Lindsey’s specifications. “I knew cost would be an issue, so I just wanted to come up with a cost-effective idea.”

Terry also suggested forming a “‘Friends of the Shelter” nonprofit to receive tax breaks and donations. Her idea came from an existing non-profit group in Vicksburg, Friends of the National Military Park.

The frustrated voice continued, “Success stories are awesome, but we got dogs dying from parvo all the time because of the bacteria-filled floodwaters. These people are working on a less-than-a-shoestring budget while we are spending money on a road to a mall that don’t exist.”

Alderman Mayfield, who is accountable for the animal shelter, had remained fairly quiet until another angry voice called him out for “not doing your job.”

“Moneywise, let’s talk money, ” Mayfield said. “There is nothing stopping the City of Vicksburg from finding money. There’s nothing stopping the county from joining in on our efforts, but how much are we willing to pay for it? How many bells and whistles? We have to find out where the money will come from—inside, outside funding and where the in-kind will come from.”

Right before Flaggs’ closing remarks, a resident questioned why the Khun Hospital property couldn’t be the site for a new shelter.

“The Khun property sat for a whole year and nobody wanted anything to do with it, including building a jail, so I have found another project to go at that location,” Flaggs said.

“You want a shelter?” Flaggs asked. “Let’s build a shelter.”

Flaggs asked Terry to gather more information on the Amish company and then called for another public meeting on March 12.

Two Baptist Hospital employees gunned down at the hospital in Jackson

Jones County homicide victim was the mother of Vicksburg resident