The Vicksburg Daily News is on scene at the China Grove head on collision. Tommy Parker has reported there is a fatality in the accident and multiple people are injured. 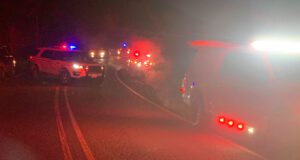 The call came into the E-911 call center at 10:17 p.m. By 10:20 p.m. multiple calls had gone out for additional equipment and ambulances to report to the scene. A single person had been ejected from their vehicle as a result of the head on collision. That person did not survive their injuries. Several other people were injured in the violent crash and are being treated and transported to the hospital. We will get you an update on their condition as that information is made public.

Identifying information on the vehicles or victims will be withheld until all family members have been notified.

The area is currently shut off and will probably remain that way for some time. Avoid the area, you won’t be able to see anything or be allowed to go anywhere near the accident scene.

First responders requested for you to pray for the families involved.

Head on collision on China Grove