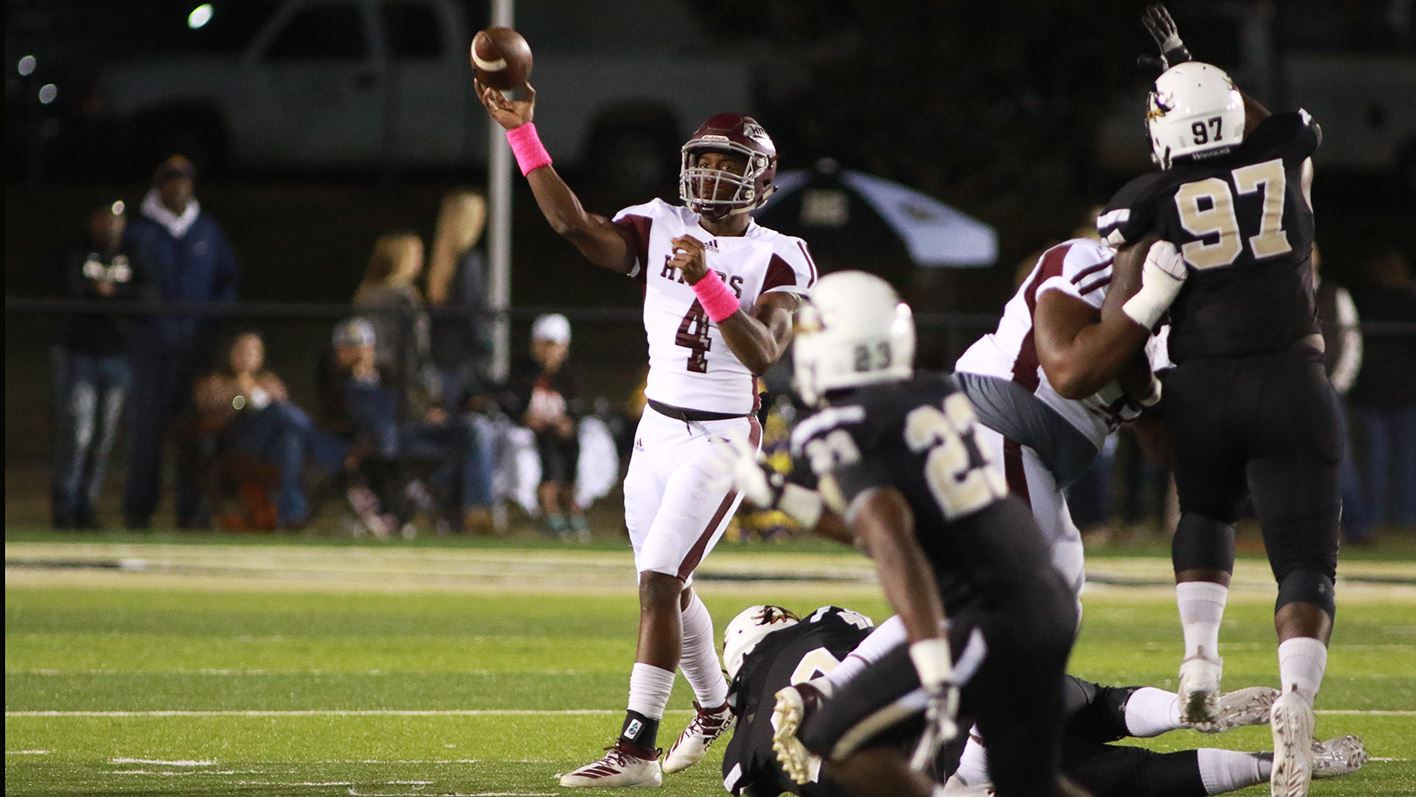 DECATUR – The sixth-ranked Hinds Eagles captured their fifth consecutive victory with a 23-20 overtime win on the road against the East Central Community College Warriors Thursday night.

The Eagles got off to a fast start when running back Don Ragsdale capped off the 50-yard opening drive with an 8-yard touchdown run less than three minutes into the ball game.

The Warriors responded with a 12-play, 70-yard opening drive that was converted into six points following a 16-yard touchdown run. Hinds special teams, however, blocked the ECCC extra point attempt to maintain a 7-6 lead with 7:32 remaining in the first quarter.

The Eagles continued their offensive momentum by answering right back with a 10-play, 65-yard drive that was completed when quarterback Elijah Walker hit wide receiver Traveyon Craig on a 4-yard slant route in the end zone. The Eagles failed to convert on their extra point attempt, but nonetheless held a 13-6 lead with 3:19 on the clock in the first quarter.

The second quarter proved to be more off a defensive quarrel as the only score came when the ECCC quarterback connected with his receiver for a 6-yard touchdown pass with just four seconds left in the half. The extra point missed wide right so the Eagles went into the locker room at halftime with a 13-12 lead.

The Warriors opened up the second half where they left off as they drove 75 yards down the field and finished the eight-play drive with a 9-yard quarterback keeper touchdown run. The ECCC offense then stayed on the field and completed the two-point conversion to give the Warriors a 20-13 lead with 11:16 left in the third quarter.

That score remained the same until the Hinds offense got the ball back on their own 20-yard line with no timeouts, and just one minute left in the game.

With the Eagles’ season on the line, Walker looked cooler than the other side of the pillow, as he commanded his offense on a six-play, 80-yard touchdown drive to give kicker Carson Flumm the opportunity to tie the game with an extra point attempt.

With just 23 seconds left, Walker finished the drive as he dished a pass to Craig who took it 26 yards into the end zone. Craig’s second score of the night cut the Warrior’s lead to just 20-19. Flumm then drilled the extra point opportunity to tie it up at 20 apiece and send the game into overtime.

The Eagles defense, which had been outstanding all night, took the field first in overtime.

After an incomplete pass on the first play of the Warrior drive, the Hinds’ defense made two huge tackles in the backfield forcing ECCC into a 4th and 23-yard situation on the Hinds 37-yard line. Outside of field goal range, the Warriors were forced to go for it and could not convert.

Following the ECCC turnover on downs, the Hinds offense drove the ball down to the Warriors’ 3-yard line, which again set the stage for Flumm. On fourth down, Flumm nailed the 19-yard field goal to give Hinds the 23-20 win in overtime.

“We knew if we could just get the ball back that last drive in the fourth quarter, we could win the game,” said third-year head coach Larry Williams. “Our guys fought hard ’til the end and never gave up.”

“I want to thank our fans who came out and supported us on the road. That is what Eagle Nation is all about,” added Williams following the thrilling overtime victory.

On defense for Hinds, Harrison Tharpe was a force to be reckoned with as he recorded at least eight tackles including two tackles for a loss. Nine different Eagle defenders finished with tackles for a loss including Rodrevius Harris, Cristian Phillips and Chris Blair who each had one sack apiece.

The win improves the Eagles overall record to 7-1 and 4-1 in the MACJC South Division.

The winner of next week’s MACJC South Division showdown will be crowned the MACJC South State Champions. Additionally, the winner will earn home-field advantage along with the No. 1 seed in the MACJC playoffs.

We would like to encourage all of Hinds’ fan to come out and show your support next week, as the Hinds Eagles will be playing for the South State Championship for the second time in the past three years.