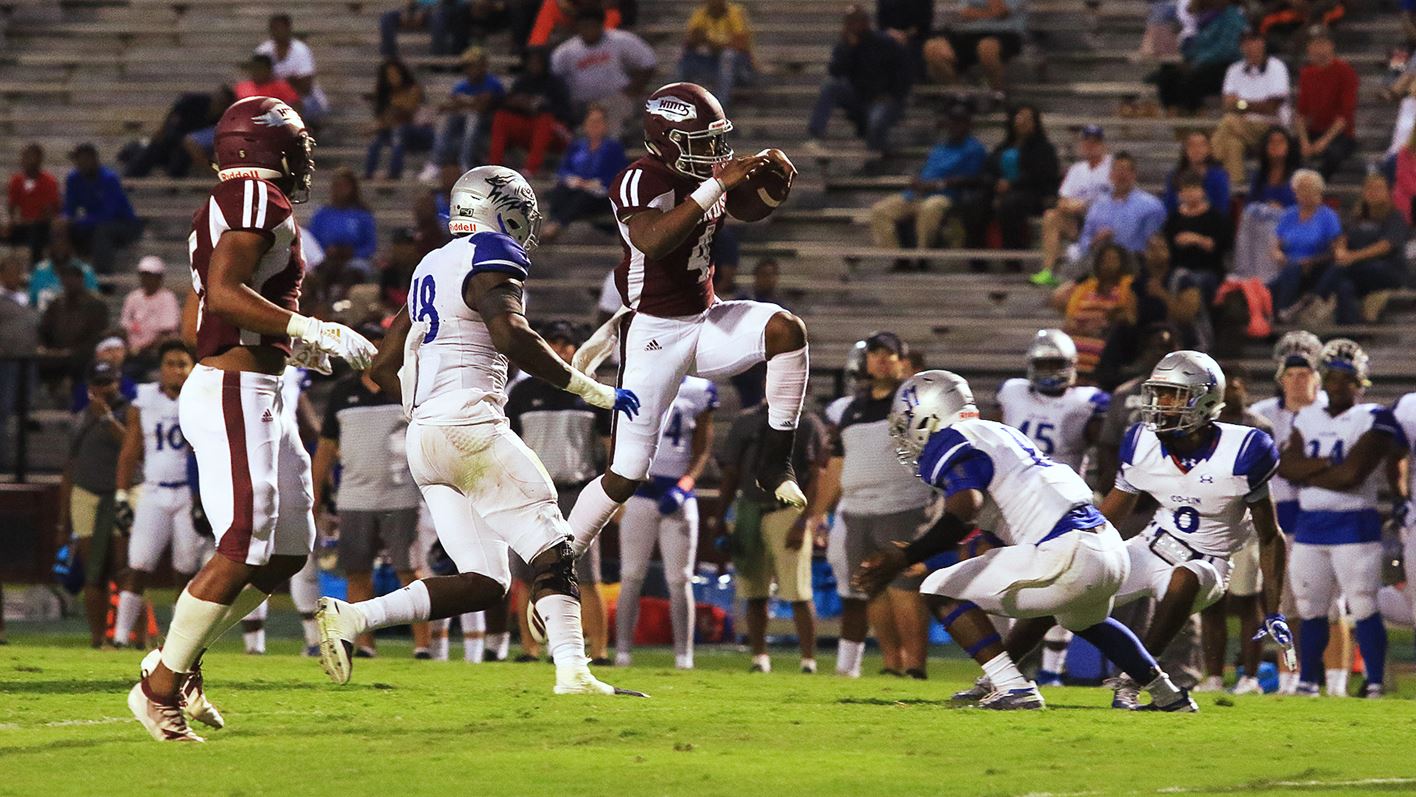 The No. 6 ranked Hinds Community College Eagles won their fourth straight game as they defeated the Copiah-Lincoln Community College Wolves 35-21 Thursday night to up their record to 6-1 in front of a massive home crowd.

The Eagles kicked off the scoring when quarterback Elijah Walker found Javon Antonio for a 23-yard touchdown pass with 10:02 left in the first quarter.

Hinds added another score after running back Don Ragsdale leapt into the end zone from a yard out. The one-yard touchdown run capped off a 12-play, 78-yard drive which gave the Eagles a 14-0 lead at the start of the second quarter.

CLCC quickly responded with a five-play, 75-yard drive capped off by a 15-yard touchdown pass, which cut the Hinds lead to 14-7 with 13:01 left in the second quarter.

With under a minute to go in the first half, Hinds pushed their lead to two scores after Walker connected with Tabashi Thomas for a 21-yard touchdown pass. Walker’s second passing touchdown of the night gave Hinds a 21-7 lead at the half.

The third quarter proved to be a back-and-forth affair. Co-Lin started off the second half with an eight-play, 84-yard drive that was completed with a two-yard touchdown run.

Hinds followed that up with a seven-play 70-yard drive capped off by a four-yard touchdown run by Ragsdale.

Co-Lin would answer right back with a four-play, 49-yard drive that was finished off with a 12-yard touchdown pass.

Hinds, however, had the final say when Walker linked up with Traveyon Craig for a 37-yard touchdown pass. Walker’s third touchdown pass of the night gave Hinds a 35-21 lead with 3:28 remaining on the clock in the third quarter.

The Eagles’ defense was able to hold the Wolves at bay the remainder of the game and secure the 35-21 victory.

With the win, the Eagles improve to 6-1 overall on the season and 3-1 in the Mississippi Association of Community and Junior Colleges South Division. They are ranked sixth nationally by the National Junior College Athletic Association.

On offense,  Walker was 20 for 28 passing and threw for 217 yards and three touchdowns. Ragsdale led the way in the backfield with 22 rushes for 100 yards and two touchdowns. On the receiving end, Craig, Thomas, and Antonio all finished with four catches and a touchdown each.

On defense, Jonathan Jordan led the way with six tackles. Additionally, Amos Robinson, Jaylen Heffner and Chris Blair caused havoc in the backfield all night, as each collected two sacks of their own.

The Eagles hold their destiny in their hands with two games remaining in the season. If they win their final two games, they will secure a first-place finish and the MACJC South Division Championship. Furthermore, they would have home field advantage in the playoffs.