New COVID-19 cases reported Friday in Mississippi topped 1,000 for the second consecutive day. As Mississippi found out this summer, as new cases rise, so do hospitalizations, and both have been rising steadily since the beginning of October. The state’s seven-day average is nearly at 800.

Mississippi isn’t alone in seeing cases rise. As a whole, the nation is seeing a 25% rise in new case seven-day averages, WJTV reported Thursday, with New Mexico, Vermont, New Hampshire, Montana and Connecticut leading the way. Only two states, Hawaii and Maine, have seen drops in new cases in the past week.

The Mississippi State Department of Health reported 25 new COVID-19 cases Friday in Warren County — the highest single-day count since August — and no new deaths. The cumulative number of cases in Warren County to date is 1,511, and the county’s death toll is 54.

Statewide, MSDH reported 1,116 new COVID-19 cases Friday, bringing the total cumulative confirmed cases in Mississippi to 109,255. The seven-day average of new cases is 796, higher by 306 cases from a month ago.

MSDH reported Friday that nine additional Mississippians died of COVID-19 statewide. The cumulative number of deaths in the state is 3,160. The state’s rate of deaths to confirmed cases is about 2.9%.

MSDH reported Friday that deaths occurred between Oct. 3 and Oct. 15 in the following counties:

New cases and deaths were reported to MSDH as of 6 p.m. Thursday, Oct. 15. MSDH usually reports statistics on the COVID-19 coronavirus each day based on the previous day’s testing and death reports.

The number of Mississippians hospitalized for the virus as of 6 p.m. Wednesday, Oct. 14, is 598, about half of the late July peak of more than 1,200. The number includes 481 with confirmed cases of COVID-19 and 117 people with suspected but unconfirmed cases. Of those with confirmed infections, 145 were critically ill and in intensive care units and 72 were on ventilators. 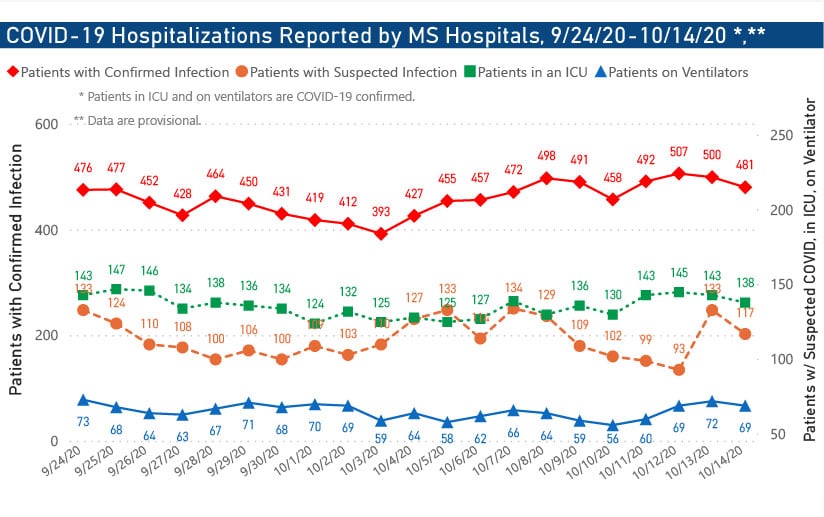 MSDH has estimated the number of people who can be presumed recovered from COVID-19 in Mississippi. That number is 94,165 through Sunday, Oct. 11. This figure is updated weekly. It represents about 86.2% of the cumulative 109,255 cases reported Friday, Oct. 16.

The number of cases in Warren County three weeks ago, Friday, Sept. 25, was 1,405, therefore the estimated number of people presumed recovered in the county is 1,351, or about 89.4% of the 1,511 cumulative cases reported as of Friday, Oct. 16. The county has an estimated 106 active cases.

The total number of Mississippians tested for COVID-19 (PCR and antigen tests identifying current infections) as of Thursday, Oct. 15, is 900,479 or about 30.3% of the state’s 2.976 million residents. The positivity rate (positive results to tests, seven-day average) was 6.3% Sunday according to Johns Hopkins University. The national rate is 5.2%, and 5% or lower indicates adequate testing.