This MudderTrucker right here was in an accident on 61 North this morning.

The driver of an 18-wheeler veered off the roadway early Friday morning and found himself overturned in foliage alongside U.S. 61 North.

This MudderTrucker was involved in a wreck on 61 North this morning.

Around 4:30 a.m., an 18-wheeler hauling equipment for events organizers “MudderTrucker” left the roadway on U.S. 61 North, about a half-mile north of Country Junction. There was no apparent reason the vehicle left the road but an eyewitness mentioned the vehicle was swerving to avoid hitting a deer. The truck ended up ramming a tree in the embankment after plowing through numerous smaller trees, vines and brush. The right side of the truck was crushed and it was shoved towards the driver’s compartment creating a very small space for the driver. 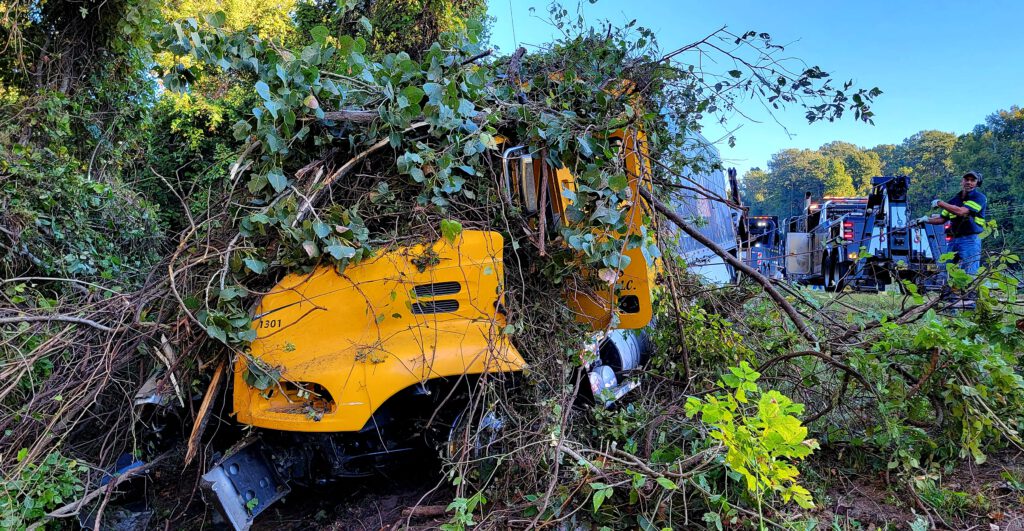 The Mississippi Highway Patrol took control of the accident scene and Wards Wrecker service was dispatched to recover the 18-wheeler from the ditch.

The effort to remove the vehicle from the heavily wooded area was led by Roger McCrory and Jimmy Maddox with Ward’s Towing.  Often times they are called to pull a vehicle away from a high-impact crash site so first responders can get to a victim.

Friday’s crash proved to be a challenge for everyone involved for a number of reasons, but primarily that the truck was embedded into a tree and covered with foliage. It hit with great impact and there is no indication the driver hit the brakes before his vehicle was stopped by the tree. The truck ended up about 30 feet down an embankment off the side of the road with the trailer’s load jammed towards the front of the trailer. 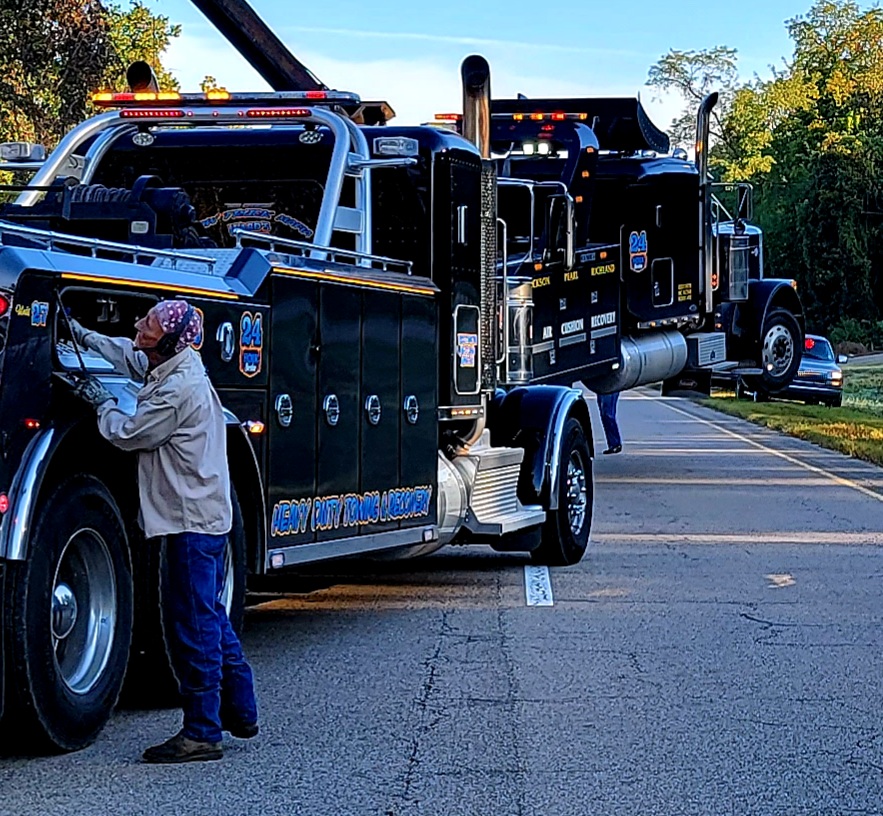 In spite of working the towing business for the greater part of their adult lives, both McCrory and Maddox were facing one of the tougher removals of their 30 some years. McCrory is a character. He often cuts up and makes jokes that help to keep the mood lighthearted.  Maddox was more businesslike and methodical, nursing a sore arm but quick to know what move to make next and seemed to work well with McCrory.

McCrory and Maddox worked as a team to inch that battered behemoth from the trees. With McCrory’s wrecker attached to the back of the trailer and Maddox to the front left side, they inched the vehicle up the hill by maneuvering their 40-ton trucks boom and pulleys. They did so in tandem and made it look easy. They would pull it a few feet, stop and check that everything was safe, maybe adjust the placement of the hooks and pull it some more.

At one point McCrory’s tow truck was 45 degrees in the air giving it all it had to get that trailer out of there.

McCrory and Maddox spent the better part of 3 hours inching the vehicle up the hill. Engine oil, transmission fluid, and, once the truck was moving up the hill, diesel fuel all spilled from the truck. Environmental Services were called in to soak up the contaminants. They pulled close to 100 gallons of diesel from the truck and filled three 55-gallon barrels and several bags of spilled oils from the side of the road.

Officer Vanlandingham and Sgt. Jones was assisted in traffic control by various Sheriff’s deputies, including Dustin Keyes, during the 5-hour ordeal of removing the trailer. At any point in time there were at least 5 police vehicles positioned in the roadway with flashing lights to warn drivers of the danger. This particular accident was just south of the treeline and at the bottom of the hill south of Redwood Elementary. Any cars driving south would come over that hill at highway speeds and have been right on top of the accident scene. To keep it safe, they even called in a fire truck to sit in the roadway in an effort to slow traffic down.

Lawman Jones has many years of experience in that section of Highway 61. Everyone who travels that section of road knows it is heavily monitored. There are endless conversations between those who travel that section of road about where Jones might be located at any point in time. There were several jokes made about how everyone driving north saw Jones working the accident so they could fly on up to Rolling Fork. Jones seems to be oblivious to the esteemed position he holds in the community.

In spite of the massive number of emergency vehicles working the accident scene, there were people speeding through the danger zone. At one point a law enforcement person called in a “chase car” to pass out tickets to those who sped through the work zone and endangered the lives of the 20 or so people working to remove that truck from the ditch.

Once the truck was out of the ditch everyone was able to get their first good look at the vehicle. Blood was splattered on the driver’s seat, door and on the steps. The steering wheel was bent and the right side of the drivers dashboard was pushed about a foot and half towards the drivers seat. The transmission and drive train were hanging down below the vehicle, the back axle was bent and the cab was askew on the frame. The window had collapsed inward and the entire cab area was covered in foliage from the dense vegetation in the accident area. Several people commented on how lucky the driver was to be alive.

Initially McCrory and Maddox worked to tow the demolished cab with the wreckers on scene. After 30 minutes or so it became obvious they would have to call in the big wrecker from Jackson to pull it onto a flatbed to get it off the road. It was about that time smoke was noticed coming from the cab area. Everyone thought it was dust from the powder the Environmental Services guys were putting on the ground to soak up the oil. Someone walked by the cab and said, “fire.” Those assembled at the end of the tractor included two Warren County firefighters, Lee Williams and Zac Hearn. They glanced at the person pointing at the fire in the cab and it took everyone a second to realize there was a fire.

That was the only delay. Hearn and Williams jumped into action by grabbing the fire extinguisher in the cab and attempting to put out the small flame. It did no good and Williams ran back to the fire truck to get the heavy-duty units from the truck. They knocked the fire down but it was obvious it wouldn’t be enough either. Williams then ran the 75 yards back to get Engine 205. Seconds later, when he pulled up, Hearn grabbed the front hose and pulled it forward, well past the fire and then back towards the flames with the nozzle in his hands. Williams had moved to the pump controls area of the truck as Hearn motioned to him to start the water.

This is something they practice almost weekly and their finesse saved precious seconds as the fire in the cab raging by this point. Hearn nozzled down to a close spray pattern, did a textbook approach at a 45 degree angle and smothered the flames at the front of the truck, pushing them back into the cab area. He then deftly worked the top of the cab spraying up and down to smother the flames with a massive amount of water. Within 30 seconds the skilled firefighter had knocked down the fire and radioed to the numerous backup units en route that the fire was out. As Hearn continued to put more water on the fire Williams had finished suiting up in his turnout and took over the hose duty from Hearn. With his fire protective gear on, Williams was able to get up in the cab area and put the water on the fire source to fully extinguish the flames.

It took another hour or so for the flatbed “rollback” type 18-wheeler tow truck to get on scene and remove the mangled cab from the roadway. Road crews with MDOT remained on scene, repairing the damage done to the roadway and embankment.

Slow down and allow them plenty of room to do their job.