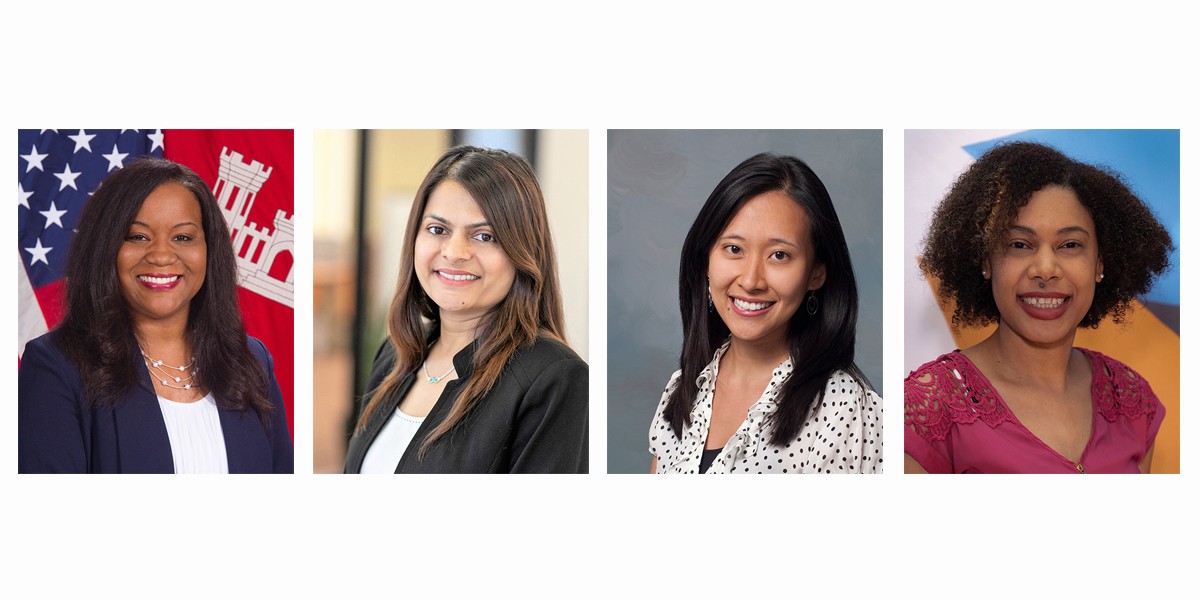 From studying how fish can protect soldiers to supporting tactical military planning, four researchers at the U.S. Army Engineer Research and Development Center  have been honored with Women of Color STEM awards — an annual, national-level recognition of significant contributions to science, technology, engineering and mathematics.

For Moore, a research computer scientist in the Information Technology Laboratory, news of the award came with a mix of emotions.

“I was surprised, grateful, yet humbled to be recognized with such an honor of this magnitude,” Moore said. “The WOC Technology All-Star award doesn’t only signify my service, but is a testament of the excellent opportunities being afforded, as well as the positive team support I’ve encountered throughout my career at ERDC.”

The Port Gibson, Mississippi, native earned her bachelor’s from Alcorn State University and her master’s from Mississippi State University. At the ERDC, she has led a $5 million per year effort to research military ground vehicle performance and analysis, as well as led a team to develop explosive threat representations.

Patel, a research mathematician in ITL, is originally from India, where she received a master’s in mathematics and a bachelor’s in science from Bangalore University, before earning a doctorate from Mississippi State University.

“I am humbled to be considered among this amazing group of women,” Patel said. “I find the opportunity of working with a diverse range of scientists and engineers very rewarding, and I’m excited to be a part of teams that deal with solving challenging problems.”

Patel’s research was inspired by the paddlefish, a freshwater fish with a long, paddle-like cartilage snout that can withstand tough stresses and dissipate energy. She leads a team of researchers who use mathematical models to develop strong, yet lightweight structural systems — much like the snout of the paddlefish — to protect American soldiers.

Lulu Edwards, a research engineer in the Geotechnical and Structures Laboratory, grew up in Starkville, Mississippi, and earned a bachelor’s from Mississippi State University and a master’s from the University of Alabama at Birmingham.

“It was such an honor to be considered for the award,” Edwards said. “It’s always nice to have your work recognized by others, and I’m just as thankful for the recognition as I am to be able to work with a great group of people on projects that I think are important and useful to our country.”

A project that led to her recognition happens to be one of Edwards’ favorites — rapidly repairing damaged airfield pavements.

“It’s been so interesting to be able to investigate and create different solutions for improved methods to recover airfield pavements in the event of an attack,” Edwards said. “I hope our research continues to improve the warfighter’s mission and leads to their success.”

In addition to the three Technology All-Stars, Barbara Pilate, a computer scientist in ITL, was honored with the New Media Leadership Award in Government.

“I was excited and thankful to be receiving this award,” said the Columbus, Mississippi, native, who holds bachelor’s and master’s degrees in computer science from Mississippi State University. “It was an honor to be nominated for this award by my organization.”

Pilate currently leads a program that supports military planners by offering a portfolio of tools that assist with strategic planning and tactical operations. The New Media Leadership Award recognizes her skills as a leader and a scientist who handles the challenging demands of her work with determination and a positive attitude.

“These women are on the forefront of important research of value to our nation and are very deserving of recognition,” said Dr. David Pittman, ERDC director.

The awards will be presented at the annual Women of Color – STEM Awards Gala Oct. 10 in Detroit, Michigan.

Related Topics:ERDCFeaturedMississippi State University
Up Next

Flaggs in top-level meeting at the Governor’s Mansion