The Mississippi State Department of Health is again reporting 32 COVID-19 deaths Wednesday, tying the most deaths reported from the virus in one day with Tuesday’s toll. The number of deaths in the state is now 374.

Five of Wednesday’s reported deaths were from prior weeks identified through a death certificate investigation.

MSDH is also reporting another rise in new COVID-19 cases Wednesday with 217, bringing the total of confirmed cases in Mississippi to 8,424.

Deaths and new cases were reported as of 6 p.m. Tuesday, May 5.

In an interview Sunday, Gov. Tate Reeves indicated that the 397 new cases reported Friday were due to a data dump over an unspecified period from one private laboratory, not a big one-day spike. Since then, MSDH has had two days of more than 300 cases, Monday with 327 cases and Tuesday with 330.

MSDH is reporting an additional two confirmed COVID-19 cases in Warren County bringing the cumulative number of cases to 90 Wednesday. The county’s death toll is unchanged and stands at two. Eleven cases in two long-term care facilities are under investigation in the county, an increase of five cases since yesterday.

The number of estimated COVID-19 cases presumed recovered in Mississippi is 4,421 as of Sunday, May 3. This figure will be updated weekly.

MSDH reports new statistics on the COVID-19 coronavirus each morning based on the previous day’s testing and death reports.

In other neighboring counties, Claiborne reports 33 cases, and Sharkey reports five cases, both unchanged since yesterday. Neither Claiborne nor Sharkey has any reported deaths from the virus, nor have they reported outbreaks in long-term care facilities. Yazoo County reports 155 cases, up one since yesterday, and two deaths. Issaquena County remains the only county in the state without any reported cases.

In all, 26 Mississippi counties are now reporting more than 100 cases each, and 10 counties report more than 200 cases. Seventeen counties have not reported any deaths.

Cases and deaths from the virus are heavily skewed toward African Americans, and MSDH is reporting racial breakdowns of each county’s statistics, available on its website. As of Wednesday, 56.5% of cases (3,878) and 54.8% of COVID-19 deaths (170) in Mississippi were among African Americans.

COVID-19 cases are also skewed toward women, with 58.8% of cases among women.

Almost all the COVID-19 deaths in Mississippi occurred among people with underlying health conditions, including obesity, lung disease and diabetes. The health of African Americans is contributing to their higher rate of infection and death from COVID-19.

All age groups have been affected by the disease, including children under 18, with 334 cases, up 23 since yesterday. As of Wednesday, MSDH reports 29 cases in infants less than 1 year old, up one since yesterday. No deaths among juveniles have been reported in Mississippi. 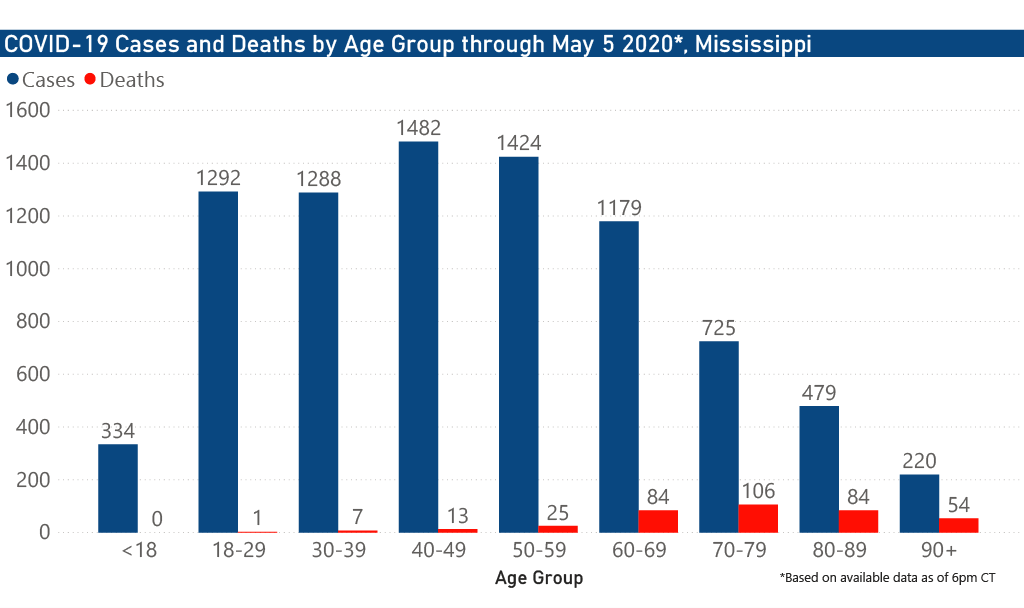 Current hospitalizations among people with confirmed COVID-19 infections decreased by 25 Tuesday to 427 patients. Another 191 hospitalized people are suspected of being infected but have not been confirmed for the virus. The overall trend for patients in intensive care units and on ventilators seems to be holding fairly steady.

Mississippi’s rate of hospitalizations for those diagnosed with COVID-19 is below the national average. From a high of more than 30%, the rate stands at 18.8% as of Wednesday. The national average for hospitalizations has seen a steady rise and stands at 40.4 per 100,000 for the week ending April 25, according to the Centers for Disease Control and Prevention; however, the rate skyrockets to 131.6 per 100,000 for those 65 and older.

The number of people tested in Mississippi as of May 4 is 80,308, with 66,941 tests, or about 83.4%, performed by private labs. About 10.2% of the tests had a positive result based on the total number of confirmed cases in the state. As more asymptomatic people are tested, the actual rate of infection will become clear. As of May 4, Mississippi has tested about 2.7% of the total population.

Anyone with symptoms of fever, severe cough or severe chest pains – especially those who are older or in poor health – should arrange for testing with their doctor or one of the many health care providers now performing testing, although not having a fever may not eliminate you from being tested. Health care providers can assess your health history and symptoms and perform testing for COVID-19 as needed. MSDH is also helping conduct free drive-up testing sites in many parts of the state. Always call ahead to the testing provider for instructions on safely being examined before you visit for your test.

Find a COVID-19 testing provider near you

Pressure mounting to reopen salons and barbershops in Mississippi