The Mississippi State Department of Health has released a broad outline of when it expects COVID-19 vaccinations to take place for various groups in the state.

Monday, Gov. Tate Reeves and State Health Officer Dr. Thomas Dobbs updated vaccination information during Reeves’ virtual news conference. The governor called getting vaccines out to Mississippians the most important task the state has at this point.

“We must focus on saving lives,” Reeves said, adding, “We just have to step on the gas.”

The chart below outlines the current schedule. 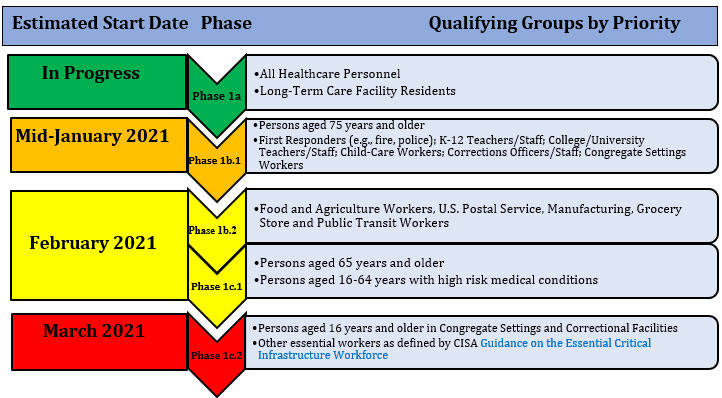 Mississippi has been in Phase 1A since the first doses of vaccine arrived in the state last month. It includes front-line health care workers and residents of long-term care facilities.

For the next phase, scheduled to begin by mid-January, vaccinations will be expanded to those over 75 not in long-term care facilities. Also included are first responders including police and firefighters, K-12 teachers and teachers in higher education and child care, and corrections officers.

Beginning in February, the people eligible to get a vaccine expands again to include people who work in jobs where public interaction is necessary. That list includes workers in grocery stores, with the Postal Service and those in public transportation. The second group in this phase incudes people 65 years of age and older, and people younger than 65 who have preexisting conditions making them more vulnerable to the virus.

In March, eligibility will be expanded to anyone 16 and older in congregate settings, such as those working in half-way houses and shelters, including those who are incarcerated. Essential workers are also in this group.

The schedule is estimated, and much will depend on the numbers of vaccine doses delivered to the state.

For more information on vaccinations in Mississippi, visit the MSDH website.

Accident at the Beechwood 4-way