Cases are down 23 percent from the previous week and down 57 percent from the country’s all-time peak in early January when the US recorded 1.7 million new cases in a single week. Hospitalization numbers confirm this rapid decline: There are about 77,000 people hospitalized with COVID-19 in the U.S. as of Feb. 10, down 42 percent from the country’s January 6 record of about 132,000 people. Reported deaths dropped for the second week in a row, with 19,266 deaths reported this week—almost 10 percent fewer than were reported in the previous week. 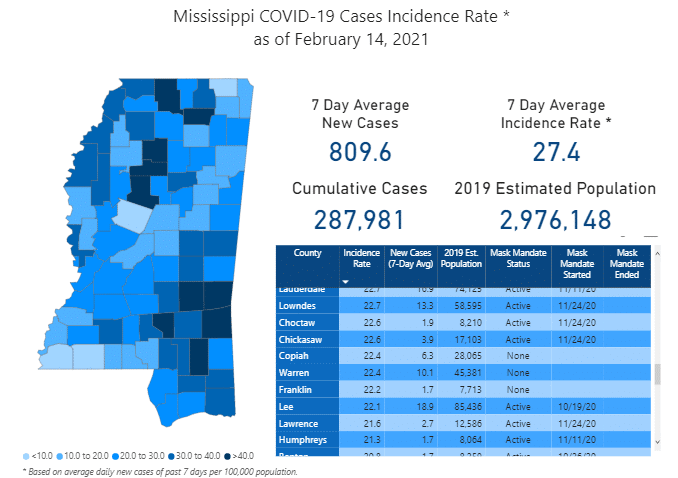 Monday, the Mississippi State Department of Health (MSDH) confirms the first case of a COVID-19 variant strain in a Mississippi resident.

A case of the B.1.1.7 UK variant strain of COVID-19 was confirmed during routine testing. No international travel or spread to contacts is known to have occurred, but additional investigation is ongoing.

The B.1.1.7 variant strain has been identified in 40 U.S. states and is known to spread more easily and quickly than other strains. While suspected, currently there is no direct evidence that this strain causes a more severe infection or a higher risk of death.

MSDH continues to expand surveillance for variant strains in Mississippi, and it is likely that additional cases will be identified. Current available vaccines are expected to be effective against variant strains, but further research continues.

Vaccination is also encouraged for those who are eligible. Current eligibility includes Mississippi residents or those who work in Mississippi ages 65 and older, or those 16-64 with certain underlying conditions, healthcare personnel, and residents of long term care facilities.