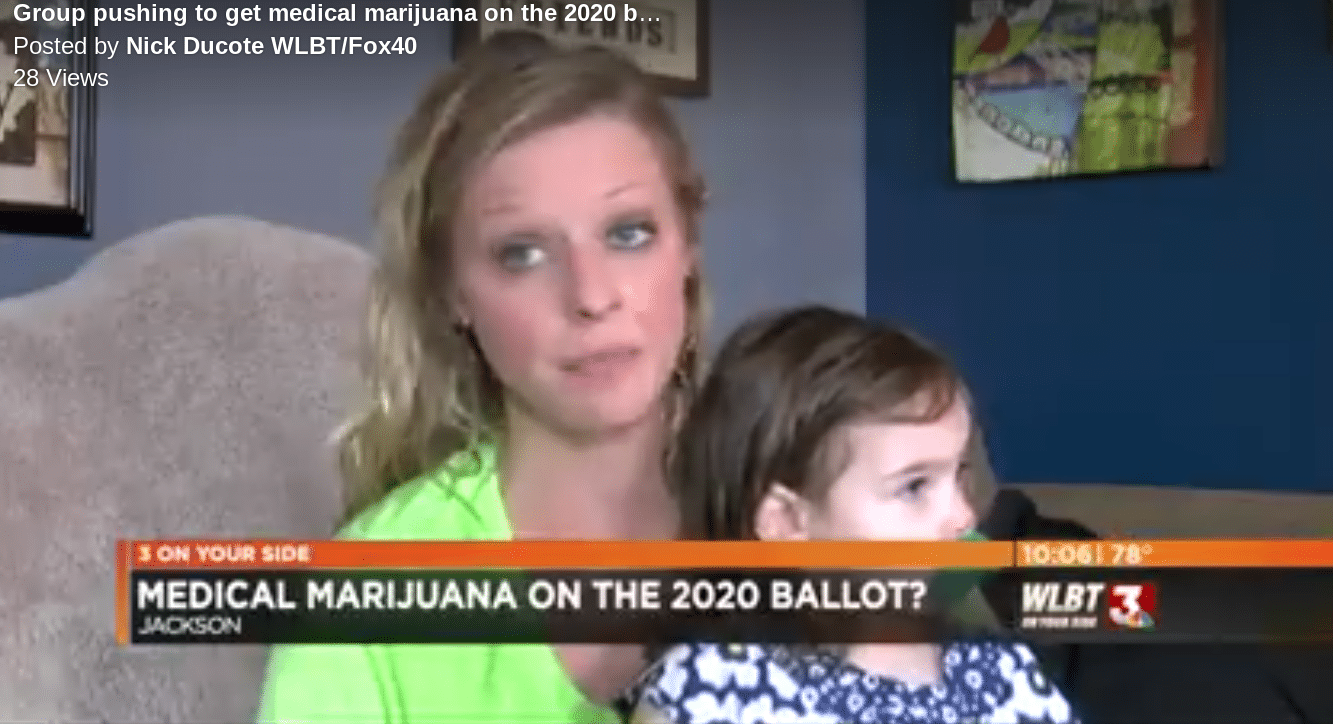 The story of Ashley Durval and her daughter, Grace Harper, who has epilepsy, has been widely cited as a reason to loosen restrictions on some marijuana byproducts that can alleviate symptoms of certain medical conditions. Durval recently launched a campaign to ask Mississippians to legalize medical marijuana. Credit: WLBT-TV

This story was written by Geoff Pender and originally published in Mississippi Today.  Read the original at mississippitoday.org.

In 2014, the Mississippi Legislature passed “Harper Grace’s Law,” named after the then 2-year-old girl who suffered a rare form of epilepsy. The measure allowed physicians at the University of Mississippi Medical Center to conduct clinical research on the medical use of cannabidiol, or CBD, and related compounds. But ironically, because of state regulations, Harper Grace was not allowed to use the medicine produced for the clinical trial named after her.

Ashley Durval filed the original paperwork that resulted in Initiative 65 — to create a medical marijuana program and enshrine it in the state Constitution — being placed on the ballot last year. Voters in November 2020 overwhelmingly approved it, although it is now being challenged in the state Supreme Court.

Mississippi lawmakers, who for years balked at creating a state medical marijuana program even as a public groundswell for it grew, have this session been trying to pass an alternative program to Initiative 65. Proponents say it would only be a backstop if the high court strikes down Initiative 65. But many supporters of the initiative suspect it’s a power and tax revenue grab by the Legislature and have opposed it.

On Wednesday, the state House killed the much-debated Senate Bill 2765. But the Senate on Wednesday evening revived the dead legislation, by inserting it as an amendment into the Harper Grace’s Law bill, which is up for reauthorization this year.

State Rep. Joel Bomgar, R-Madison, an ardent supporter of Initiative 65 who spent more than $2 million of his own money on the campaign for it, showed House colleagues and media Durval’s statement on Thursday and said, “It’s just sick. We’ve got to kill (the new Senate measure).”

“So the Senate is using the bill named for her daughter, who couldn’t get the medicine she needed from her own program, to undermine the ballot initiative her mother pushed,” Bomgar said. “We are using her daughter’s bill to screw over her mother’s initiative she filed to help her daughter get treatment she needs.

“It reminds me of the biblical passage about not boiling a baby goat in its mother’s milk,” Bomgar said. “I think it’s absolutely ridiculous.”

Senate proponents of the legislative measure, including Lt. Gov. Delbert Hosemann, said it would only serve as a backup if the high court kills initiative 65. However, the Senate bill as originally drafted would have created a program that would run separately regardless of whether Initiative 65 is upheld. It was amended after debate to be effective only if the court strikes down the voter initiative.

A key difference between Initiative 65 and the Senate’s proposal is that under the voter-passed initiative, the Legislature cannot tax marijuana sales, nor spend any money the program generates. The Senate proposal would levy taxes and fees on cultivators, dispensaries and patients that some lawmakers estimated could bring hundreds of millions of dollars into state coffers.

Initiative 65, which opponents still claim was drafted to favor the marijuana industry and is just short of legalized recreational use, puts the Mississippi State Department of Health in charge of the program, with no oversight by elected officials. It also prevents standard taxation of the marijuana, and any fees collected by the health department can only be used to run and expand the marijuana program, not go into state taxpayer coffers. The measure allows little regulation by local governments, no limits on the number of dispensaries and otherwise leaves many specifics unspecified.

Hosemann on Wednesday evening said he doesn’t understand why many supporters of Initiative 65 are opposing the Senate efforts. He said if the high court strikes down Initiative 65, and the Senate backup is not passed, there will not be a state medical marijuana program anytime soon. He vowed “100 percent” that the Senate plans to keep the “trigger” language in the bill, that the legislative marijuana program would be enacted only if the court strikes down the voter-approved one.

“Our senators believe that the people in Mississippi voted on medical marijuana and they deserve to have that … a backup plan,” Hosemann said. He called opposition saying lawmakers are trying to usurp the will of the voters or greatly alter what they passed, “subterfuge.”

Good times that are not forgotten