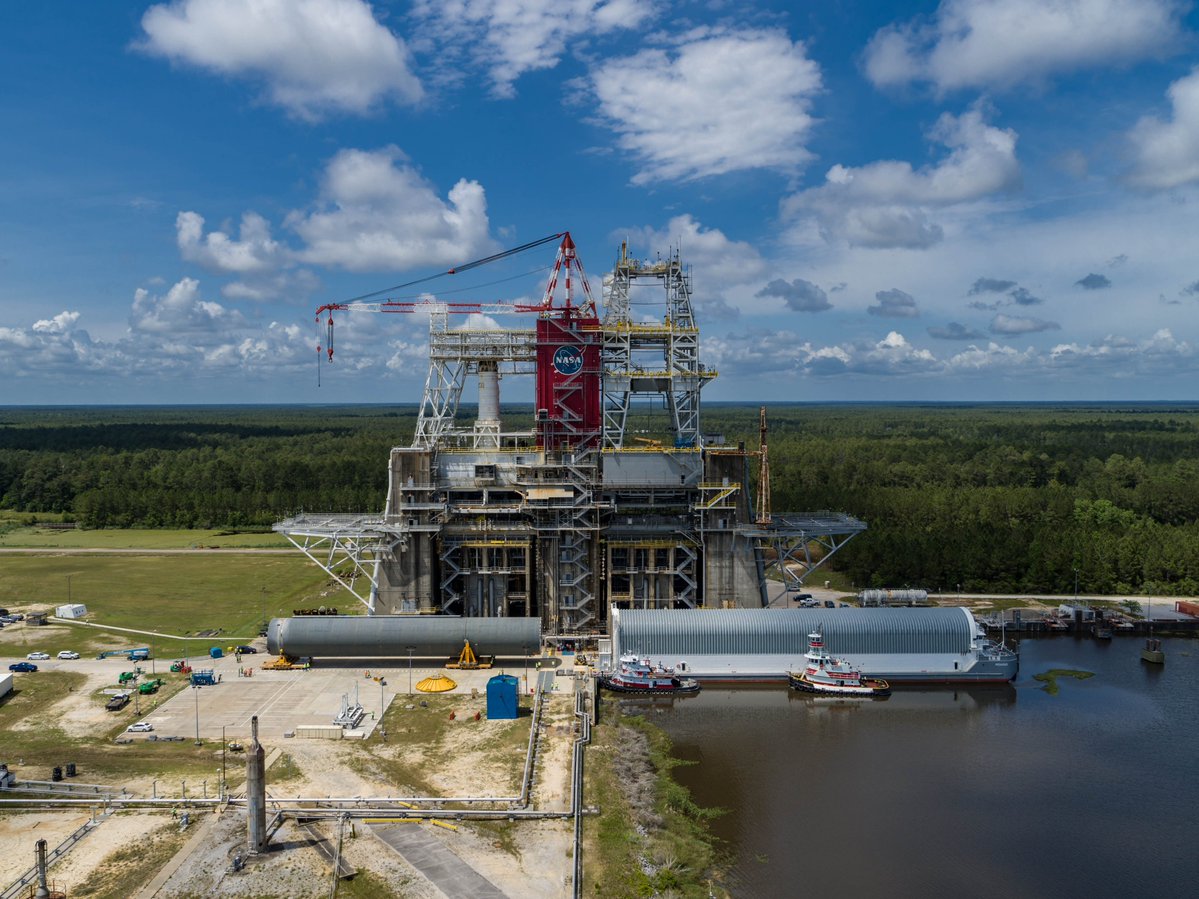 Image from NASA
From the Stennis Space Center:NASA Administrator Jim Bridenstine announced July 25 the agency will conduct a “Green Run” core stage test for the Space Launch System rocket ahead of the upcoming Artemis 1 lunar mission.

The first eight minutes of every Artemis mission with NASA’s Space Launch System (SLS) rocket will begin with core stage and solid rocket boosters producing 8.8 million pounds of thrust to launch the agency’s Orion spacecraft to the Moon. NASA will test the rocket’s 212-foot tall core stage- the tallest rocket stage the agency has ever built- with a “Green Run” test on Earth before launch day to help ensure mission success and pave the way for future Artemis missions carrying crew to the Moon. Missions at the Moon will be a stepping stone to prepare for human exploration of Mars.

Image from the Stennis Space Center.

During the Green Run testing, engineers will install the core stage that will send Orion to the Moon in the B-2 Test Stand at NASA’s Stennis Space Center near Bay St. Louis, Mississippi for a series of tests that will build like a crescendo over several months. The term “green” refers to the new hardware that will work together to power the stage, and “run” refers to operating all the components together simultaneously for the first time. Many aspects will be carried out for the first time, such as fueling and pressurizing the stage, and the test series culminates with firing up all four RS-25 engines to demonstrate that the engines, tanks, fuel lines, valves, pressurization system, and software can all perform together just as they will on launch day.

“The SLS core stage is an engineering feat that includes not only the largest rocket propellant tanks ever built but also sophisticated avionics and main propulsion systems,” said Lisa Bates, SLS deputy stages manager. “While the rocket is designed to evolve over time for different mission objectives, the core stage design will remain basically the same. The Green Run acceptance test gives NASA the confidence needed to know the new core stage will perform again and again as it is intended.”

The SLS core stage includes state-of-the-art avionics, miles of cables and propulsion systems and two huge liquid propellant tanks that collectively hold 733,000 gallons of liquid oxygen and liquid hydrogen to power the four RS-25 engines. Together, they will produce more than 2 million pounds of thrust to help send Artemis 1 beyond Earth’s orbit to the Moon. 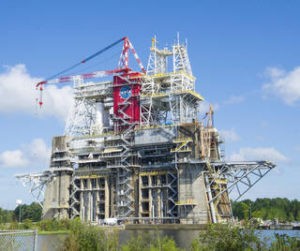 The “Green Run” test of the core stage for NASA’s Space Launch System (SLS) will be conducted at the B-2 Test Stand at NASA’s Stennis Space Flight Center near Bay St. Louis, Mississippi. The historic test stand has been used to test stages for multiple programs, including the Saturn V and the space shuttle. The test stand was renovated to accommodate the SLS rocket’s core stage, which is the largest stage NASA has ever built.
Credits: NASA

The test program for the core stage at Stennis will begin with installing the stage into the test stand. Then, engineers will turn the components on one by one through a series of initial tests and functional checks designed to identify any issues. Those tests and checks will culminate in an eight-minute-long test fire, mimicking the full duration of the stage’s first flight with ignition, ascent and engine shutdown. The results of this test also will provide important data that will confirm how the system reacts as the fuel is depleted from the propellant tanks.

“With Green Run, we verify each individual component operates well within the core stage system,” said Bates. “It’s more than testing. It’s the first time the stage will come to life and be fully operational from the avionics in the top of the core stage to the engines at the bottom.”

The test series is a collaborative effort between a number of NASA field centers, programs and contractors. The entire stage was built and manufactured at NASA’s Michoud Assembly Facility in New Orleans. The structural test articles, also built at Michoud, were shipped to NASA’s Marshall Space Flight Center in Huntsville, Alabama, for structural testing. The work done by Marshall’s test teams certifies the structural integrity of the rocket’s core stage, while Green Run shows that the integrated stage operates correctly. The Stennis teams renovated the historic B-2 Test Stand used to test stages for multiple programs including the Saturn V and the space shuttle propulsion system in the 1970s.

“Green Run is a historic moment for NASA and Stennis for a number of reasons,” said Dr. Richard Gilbrech, Director, Stennis Space Center. “For the first time in NASA’s history, a launch vehicle will use flight hardware for its first test, and the Stennis test stands will once again test the core stage for Moon missions.”

Historically, other NASA rockets built to carry astronauts have used main propulsion test articles to test the integrated engines and main propulsion system. The SLS program is performing the stage testing with flight hardware. Once the validation of the stage is complete, the entire stage will be checked out, refurbished as needed, and then shipped to NASA’s Kennedy Space Center in Florida for the Artemis 1 launch. The next time the core stage engines roar to life will be on the launchpad at Kennedy.

NASA is working to land the first woman and next man on the Moon by 2024. SLS and Orion, along with the Gateway in orbit around the Moon, are NASA’s backbone for deep space exploration. SLS is the only rocket that can send Orion, astronauts and supplies to the Moon on a single mission.

Accident on Clay in front of Pizza Inn