The U.S. hit another record in new reported COVID-19 cases Monday, reporting at least 130,553 cases for a seven-day average of 116,448 cases per day, an increase of 64% from the average two weeks earlier. Another 745 new deaths were reported nationwide. This latest surge is concentrated in the upper Midwest, but few places in the U.S. are immune to it.

In Mississippi, the seven-day average of 947 new cases is as high as it was in early August, just after the peak in late July.

In Warren County, the Mississippi State Department of Health reported seven new COVID-19 cases Tuesday and no new deaths. The cumulative number of cases in Warren County to date is 1,625, and the county’s death toll is 56.

Statewide, MSDH reported 933 new COVID-19 cases Tuesday, bringing the total cumulative confirmed cases in Mississippi to 128,138. The seven-day average of new cases is 947, about 308 cases higher than a month ago and on par with numbers in early August. 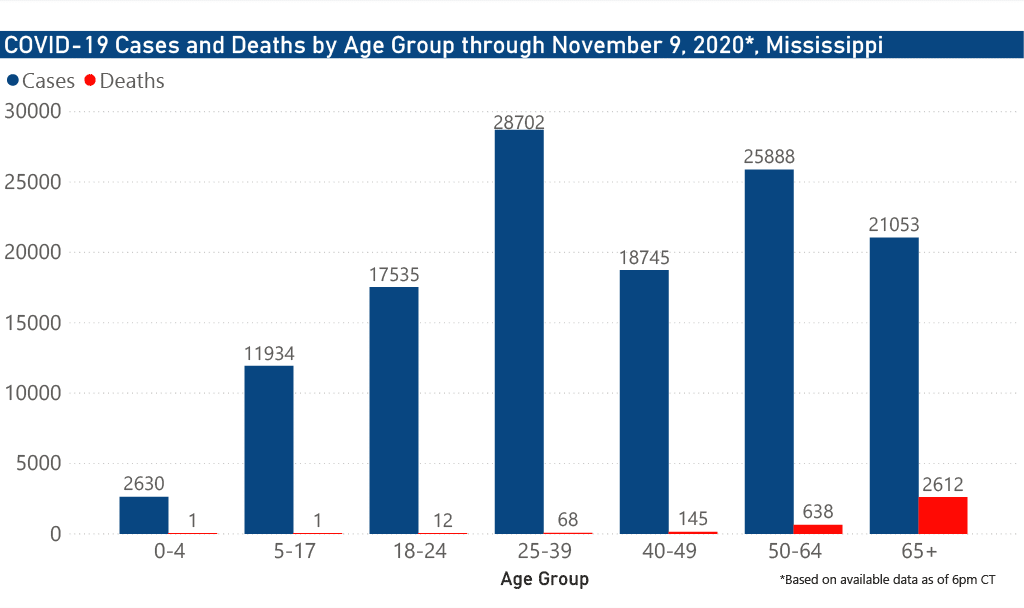 MSDH reported Tuesday that 37 more Mississippians died of COVID-19 statewide. The cumulative number of deaths in the state is 3,480. The state’s rate of deaths to confirmed cases is about 2.7%.

Of the 37 deaths MSDH reported Tuesday, 25 occurred between Nov. 1 and Nov. 9 in the following counties:

Twelve COVID-19 related deaths occurred between Oct. 23 and Nov. 3 and were identified from death certificate reports.

New cases and deaths were reported to MSDH as of 6 p.m. Monday, Nov. 9. MSDH usually reports statistics on the COVID-19 coronavirus each day based on the previous day’s testing and death reports.

The number of Mississippians hospitalized for the virus as of 6 p.m. Sunday, Nov. 8, was 718, well over half of the late July peak of about 1,200. The number includes 618 with confirmed cases of COVID-19 and 100 people with suspected but unconfirmed cases. Of those with confirmed infections, 190 were critically ill and in intensive care units and 76 were on ventilators. 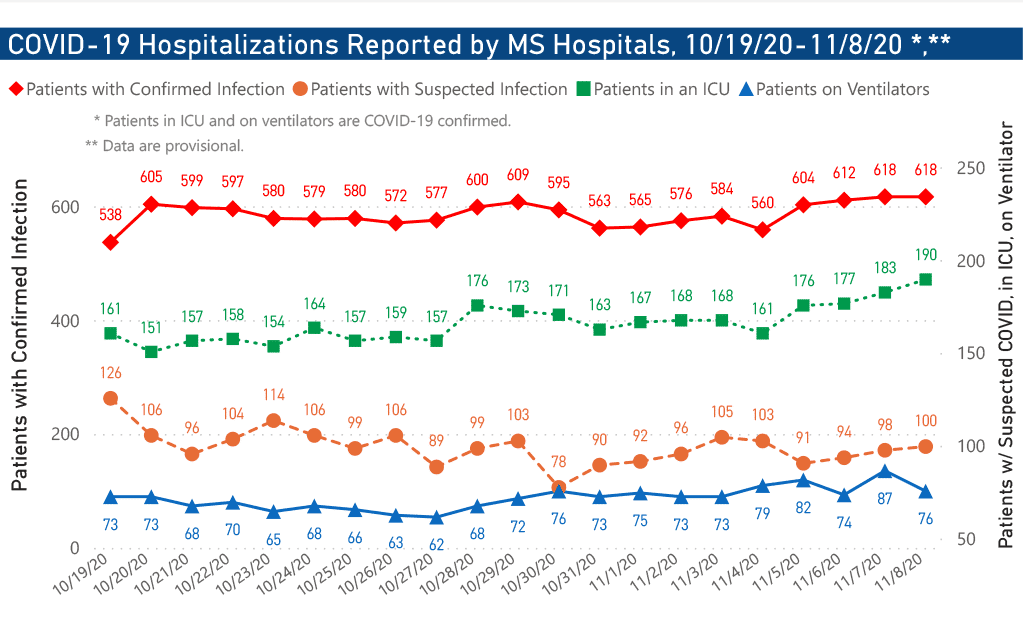 MSDH has estimated the number of people who can be presumed recovered from COVID-19 in Mississippi. That number is 111,430 through Sunday, Nov. 8. This figure is updated weekly. It represents about 87% of the cumulative 128,138 cases reported as of Tuesday, Nov. 10.

The number of cases in Warren County three weeks ago, Tuesday, Oct. 20, was 1,527, therefore the estimated number of people presumed recovered in the county is 1,471, or about 90.5% of the 1,625 cumulative cases reported as of Tuesday, Nov. 10. The county has an estimated 98 active cases.