Mississippi's Nov. 3 ballot initiatives: What you need to know

The flag is only one of three initiatives on this year's ballot.

The Mississippi Secretary of State has released a sample ballot for the upcoming General Election on Nov. 3.

In addition to voting for politicians and judges, Mississippians have the opportunity to make their voices heard on three ballot measures: medical marijuana, how governors are elected and the new state flag.

Ballot measure one pits Initiative 65 against 65A on the issue of medical marijuana. Although they sound similar, the differences are huge.

Initiative 65 would allow the doctors to prescribe the herb to patients with any of 22 debilitating medical conditions. Mississippians for Compassionate Care gathered more than 228,000 signatures to get 65 on the ballot.

The competing Initiative 65A, written by the state Legislature, limits the use of medical marijuana to terminally ill patients only. It also says the herb must be “pharmaceutical quality” without defining what that means.

Beyond the confusing language making the two sound nearly the same — some say deliberately confusing on the part of the Legislature — there’s another quirk to voting for either of the initiatives: You must mark the ballot in two places.

It’s hard to imagine making it any more confusing.

Read more about the issue here and here. 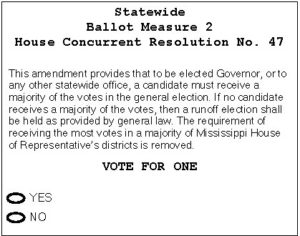 Ballot measure two will determine how votes are counted for the statewide offices. Mississippi law says that a candidate must carry the majority of the state’s 122 house districts, not just get a majority of votes. Critics say the law dates to the bad old Jim Crow days and is designed to disenfranchise African American voters in majority Black districts. If no candidate leaps over both hurdles, the Mississippi House of Representatives gets to decide the winner.

Vote yes to eliminate this odd rule and allow majority voting with runoffs if necessary, or vote no to let it stand. 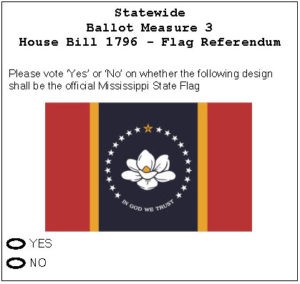 It’s a straight yes or no vote on the one design selected by the nine-member Commission to Redesign the Mississippi State Flag. If you like it, vote yes. If you don’t, vote no.

If the majority of voters say no to the design, the selection process — and the rancor that has come along with the process — starts over for another vote in 2021.

See the full sample ballot below. Note that not all selections will appear on every ballot, depending on location. Click on any image to enlarge it. 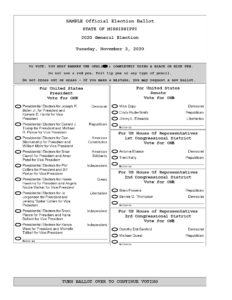 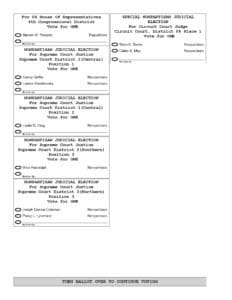 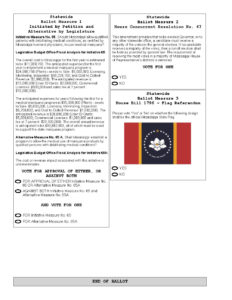 Presley: ‘What are they hiding?’ PSC subpoenas AT&T for information