New COVID-19 cases and hospitalizations continued a steady climb Wednesday in Mississippi as they have been doing for more than 10 days.

The Mississippi State Department of Health reported five new COVID-19 cases Wednesday in Warren County and one new death, identified from a death certificate report. The cumulative number of cases in Warren County to date is 1,481, and the county’s death toll is 54.

Statewide, MSDH reported 876 new COVID-19 cases Wednesday, bringing the total cumulative confirmed cases in Mississippi to 106,817. The seven-day average of new cases is 654, higher by 241 cases from a month ago.

MSDH reported Wednesday that 25 additional Mississippians died of COVID-19 statewide. The cumulative number of deaths in the state is 3,140. The state’s rate of deaths to confirmed cases is about 2.9%.

Of the 25 deaths MSDH reported Wednesday, nine occurred between Oct. 11 and Oct. 13 in the following counties:

Sixteen COVID-19 related deaths occurred between July 28 and Oct. 8 and were identified from death certificate reports.

New cases and deaths were reported to MSDH as of 6 p.m. Tuesday, Oct. 13. MSDH usually reports statistics on the COVID-19 coronavirus each day based on the previous day’s testing and death reports. 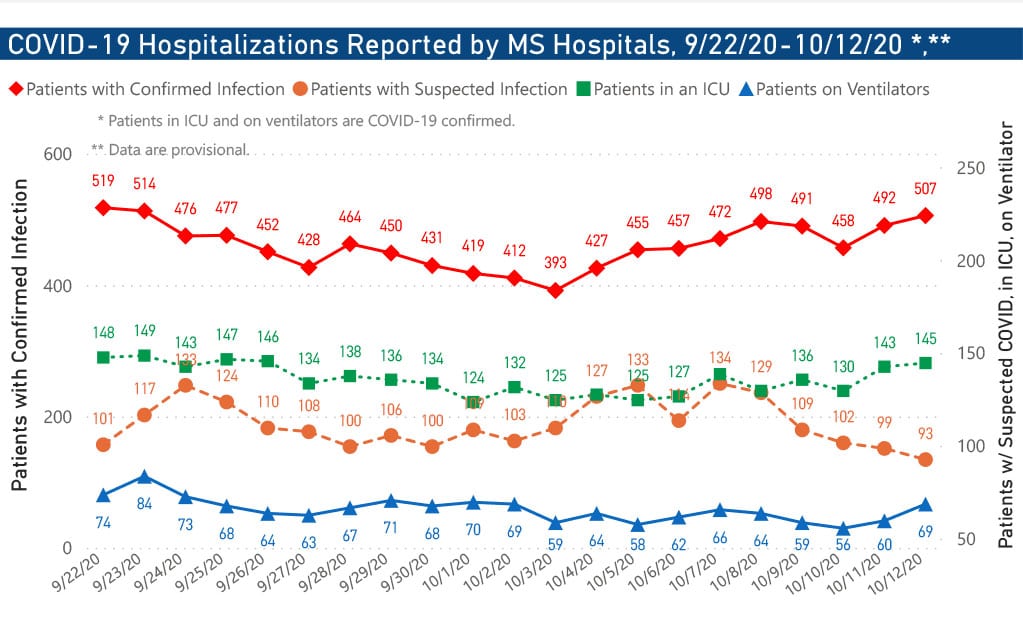 MSDH has estimated the number of people who can be presumed recovered from COVID-19 in Mississippi. That number is 94,165 through Sunday, Oct. 11. This figure is updated weekly. It represents about 88.2% of the cumulative 106,817 cases reported Wednesday, Oct. 14.

The number of cases in Warren County three weeks ago, Wednesday, Sept. 23, was 1,384, therefore the estimated number of people presumed recovered in the county is 1,330, or about 89.8% of the 1,481 cumulative cases reported as of Wednesday, Oct. 14. The county has an estimated 97 active cases.