About 5.9 million doses of the Moderna vaccine are being distributed around the nation after receiving emergency use authorization Friday from the Food and Drug Administration.

Mississippi may be able to begin inoculating using the new vaccine as early as Wednesday. The Moderna vaccine is similar to the Pfizer vaccine, which received the FDA’s emergency approval earlier this month. It does not require ultra-cold storage, however, making it a bit easier to distribute to remote rural areas. Both vaccines require two shots about three weeks apart.

Health care officials emphasize that Mississippians need to continue taking precautions to limit the spread of the virus. Of particular importance now is avoiding holiday parties and social gatherings with people outside of immediate family or household. That includes sporting events, in-person church services, weddings and funerals. In addition, wearing a mask in public, keeping 6 feet of social distance and practicing good hand hygiene continue to be essential.

Warren County reported 25 new cases Sunday and Monday. The 14-day total of new cases is 370, putting the county well into Gov. Tate Reeves hot spot definition that brings with it the probability of increased COVID-19 restrictions. The county has been within the governor’s parameters since Dec. 8, nearly three weeks. The number of cases reported so far in December, 540, is now more than July’s total of 521, with another week to go. Expect to see about 800 cases this month if the trends don’t change.

The last time Mississippi reported fewer than 1,000 new cases in one day was Nov. 24. The state reported nearly 3,400 new cases Sunday and Monday. Twelve of the first 21 days in December have seen more than 2,000 cases per day.

With more than 42,000 new cases reported so far in December, the state will see more than 62,000 cases by the end of the month if the current trend continues. Cases to date in December already obliterate the previous monthly high of around 33,000 set only last month and the July surge of 31,500 cases. State health officials expect cases to go even higher in January after the Christmas and New Year holidays and are urging Mississippians not to hold parties or other large gatherings that include people not in their immediate families.

The huge number of cases means a corresponding rise in the number of hospitalizations in the state. Hospitalizations have now surpassed the July high of around 1,250, and hospitals across Mississippi are reporting that no ICU beds are available for any seriously ill or injured person, not just COVID-19 patients. As of Dec. 15, the Mississippi State Department of Health suspended elective surgeries statewide.

Nationally, the cumulative cases in the U.S. have soared to more than 17.8 million, with some sources putting the figure closer to 18.3 million. Rates of infection, hospitalization and deaths continue to rise. The number of people who have died in the U.S. since the beginning of the crisis numbers about 317,800.s

At least 1,422 people died of the virus Sunday in the U.S., and at least 179,803 new cases were reported. As expected, the rate of deaths is increasing faster after a surge in new cases. Deaths have increased 19% in the past two weeks, while cases have gone up about 10%. The number of people hospitalized across the nation is about 113,700.

California, Illinois, Pennsylvania and Texas all announced more than 1,000 deaths in the past week, while the Midwest and Mountain states continue to show improvement.

In Warren County, MSDH reported 16 new COVID-19 cases Sunday and one new death. An additional nine cases have been reported Monday. The cumulative number of cases in Warren County to date is 2,327, and the county’s death toll is 69. The seven-day average of new cases in the county 23.6 per day, more than five times higher than in early November when the average was about five cases per day.

Statewide, MSDH reported 2,222 new COVID-19 cases Sunday and 1,167 Monday, bringing the total cumulative confirmed cases in Mississippi to 195,500. The seven-day average of new cases is 2,058 per day, about 63% higher than the seven-day average a month ago, when the state’s numbers were already on the rise. The current averages far outstrip the numbers seen at the height of the last surge in July.

Deaths are a lagging indicator. During last summer’s surge, for example, July broke records for new cases. In August, deaths surged. The highest number of deaths to date in Mississippi was 67 reported Aug. 25. November and December case numbers have exceeded cases reported in July.

An additional 17 COVID-19 related deaths occurred between Nov. 22 and Dec. 14 and were identified from death certificate reports.

New cases and deaths were reported to MSDH as of 6 p.m. Saturday, Dec. 19, and Sunday, Dec. 20. MSDH usually reports statistics on the COVID-19 coronavirus each day based on the previous day’s testing and death reports.

The number of Mississippians hospitalized for the virus as of 6 p.m. Friday, Dec. 18, was 1,319. The number includes 1,226 with confirmed cases of COVID-19 and 93 people with suspected but unconfirmed cases. Of those with confirmed infections, 308 were critically ill and in intensive care units and 188 were on ventilators. 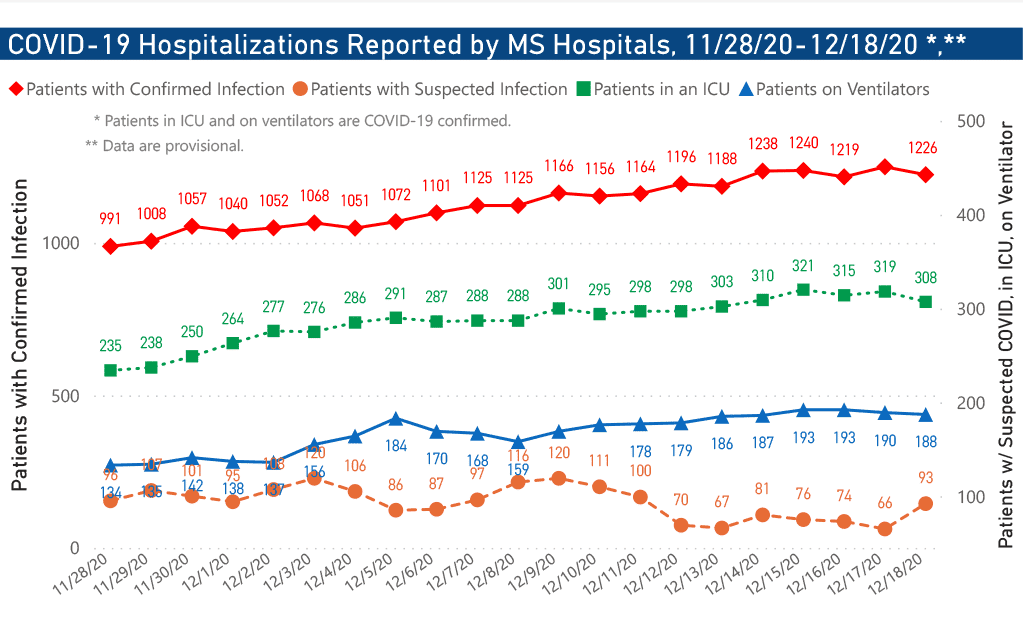 MSDH has estimated the number of people who can be presumed recovered from COVID-19 in Mississippi. That number is 154,669 through Sunday, Dec. 20. It represents about 79.1% of the cumulative 195,500 cases reported as of Monday, Dec. 21.

The number of cumulative cases in Warren County three weeks ago, Monday, Nov. 30, was 1,787, therefore the estimated number of people presumed recovered in the county is 1,718, or about 73.8% of the 2,327 cumulative cases reported as of Monday, Dec. 21. The county has an estimated 540 active cases.

The total number of Mississippians tested for COVID-19 (PCR and antigen tests identifying current infections) as of Saturday, Dec. 19, is 1,669,558 or about 56.1% of the state’s 2.976 million residents. MSDH reports statewide test results once a week. Without daily updated numbers of tests, it is impossible to accurately calculate Mississippi’s positivity rate (positive results to tests, seven-day average); however, the estimated rate was 21.8% Sunday, according to Johns Hopkins University. The national rate is 11.2%, and 5% or lower indicates adequate testing.