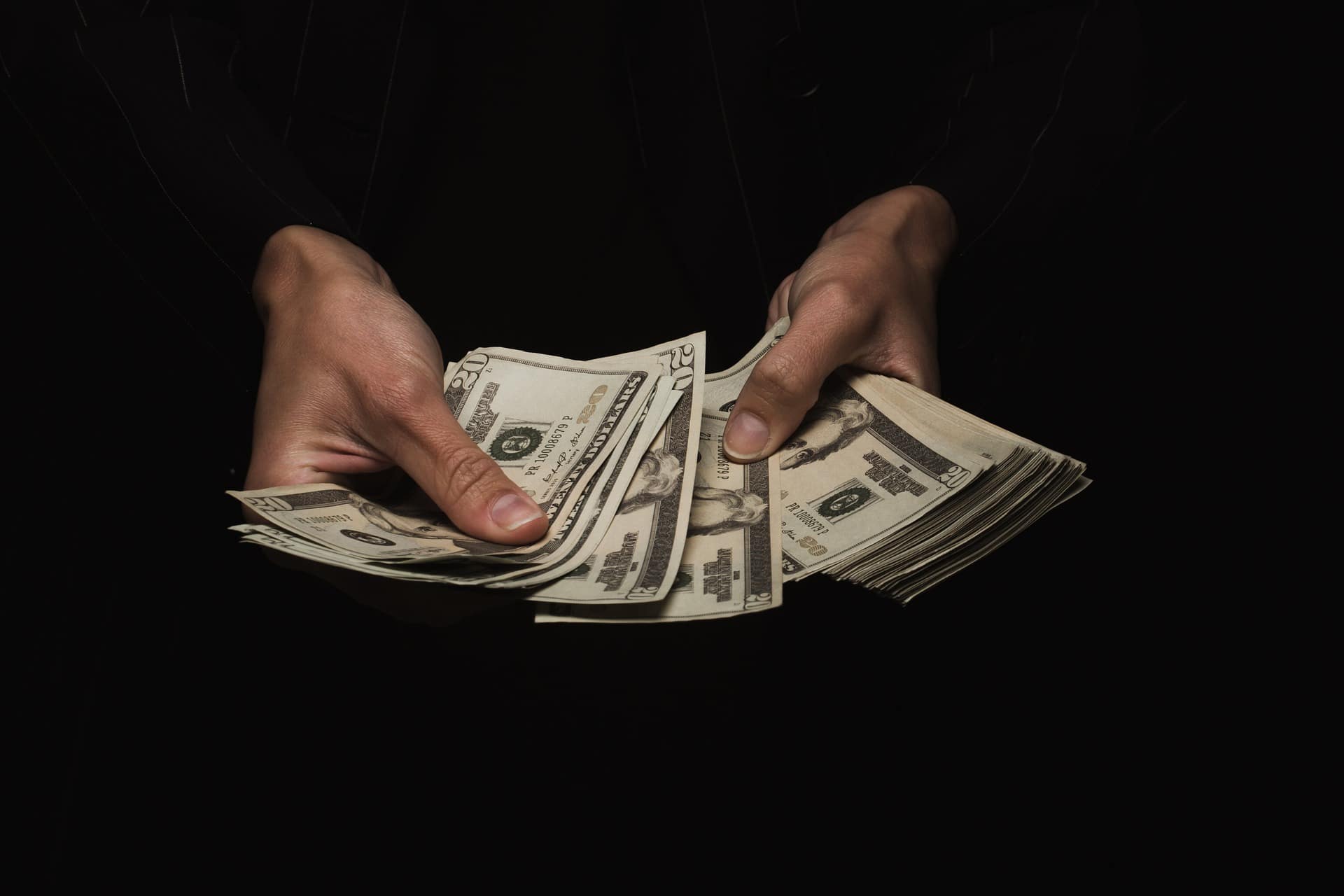 Image by MOHAMMEd ALIM from Pixabay

In the year after a State Auditor’s investigation forced Mississippi’s former welfare director to retire due to massive alleged misspending and theft, the state spent the lowest amount welfare dollars in the program’s history.

The effect was that fewer dollars flew out the door unchecked, but also that fewer people in the poorest state in the nation received the aid during a particularly difficult year.

Prior to three years ago, low-income child advocacy groups had reamed the state for not using all of its federal welfare funding; in turn, the welfare agency started shelling out cash. In 2020, as the scandal unfolded, the agency accumulated an “unobligated” balance of nearly $50 million, back up to where it was when the agency was catching so much flack for leaving funds unspent.

From October 2019 to September 2020, half of which was during a global pandemic and economic recession, the state spent $77 million in Temporary Assistance for Needy Families (TANF) grant funds compared to $135 million just two years earlier.

New federal data shows the state in 2020 spent less than 5%, about $3.7 million, on direct cash assistance to poor families, what people generally think of when they hear “welfare.” Nationally, that number is 22%. This low spending on direct assistance is typical for Mississippi’s program. However, a recent legislative increase to the cash assistance benefit amount should result in a uptick in this spending in 2021. The data reflecting this year won’t be released until 2022.

The $77 million spent in 2020 includes around $18 million that Mississippi spends in state dollars every year for college scholarships, many of which go to students from middle class families, that it records as welfare spending for the purpose of meeting its federal match. It also includes almost $8.5 million in federal aid the state spends on administration and $22 million that the state transfers to Child Protection Services to supplement the budget of the state’s foster care system.

This means less than a third of welfare spending in 2020 went to dedicated services for families in poverty: cash assistance ($3.7 million), work supports like transportation ($5.7 million) and Fatherhood and Two-Parent Family Formation and Maintenance Programs ($15.4 million).

The state did not transfer any funds in 2020 to the Child Care Development Fund, which provides child care vouchers to working families and, due to funding shortfalls, serves only a fraction of children in need each year. In some past years, the state has transferred the maximum of 30% of its TANF grant to child care.

The U.S. Department of Health and Human Services’ Administration for Children and Families released the new data in October. 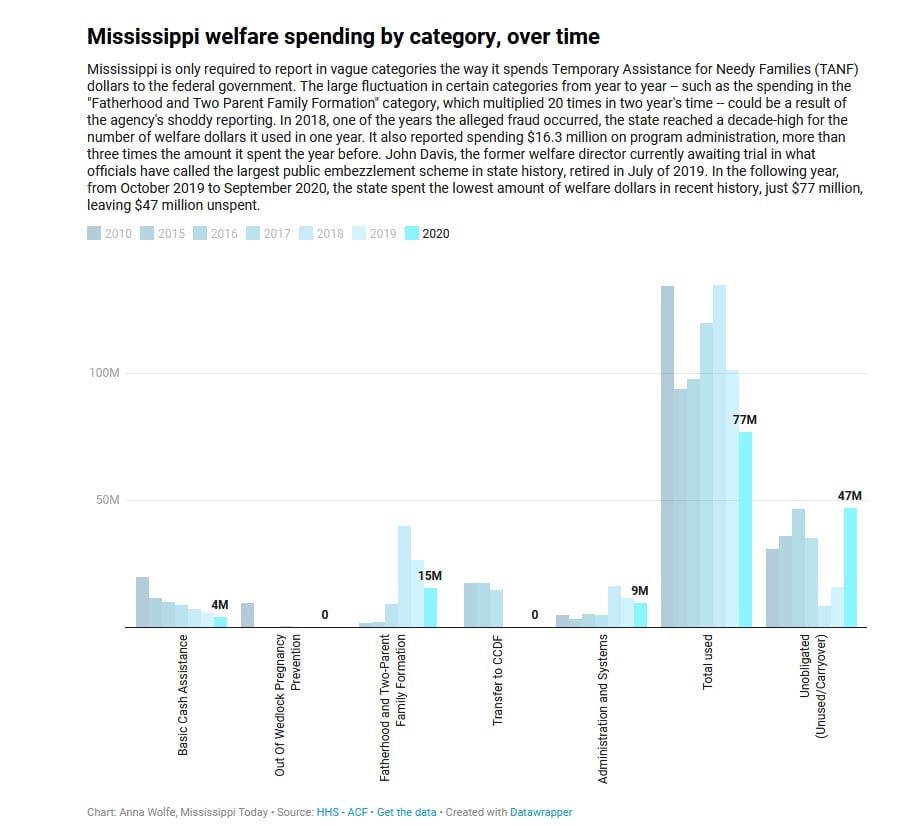 Mississippi receives $86 million through the federal Temporary Assistance for Needy Families block grant each year to assist very poor residents or prevent families from falling into poverty. The state must provide a state match of around $22 million. In 2020, Mississippi spent just 64% of its federal funding.Every year, the state issues a portion of its funding as TANF subgrants to private organizations, such as local planning and development districts, the Boys & Girls Club, or international humanitarian organization Save the Children, to offer services to families, such as workforce development, parenting classes or after school programs. The new federal data suggests the department primarily codes these expenditures under the “fatherhood” category. For more than 20 years, the state has called some of these TANF subgrants, which went to many small organizations across the state, “Families First grants.”

Prior to Davis’ administration, the state had not been spending all of its grant funds each year, leaving millions unspent despite great need across the state. Advocates for affordable child care for low-income families frequently lambasted the state for failing to spend down its welfare dollars in ways that best serve the state’s struggling residents. By 2016, the state had accumulated $47 million in unspent welfare dollars.

The state recognized it had money to blow.

The department opened itself up to trouble in 2017 when it chose to subgrant with just two nonprofits to run the statewide “Families First for Mississippi,” and it began sending up-front, multi-million payments to the private organizations. The agency selected Nancy New’s nonprofit without a competitive bid process to run the program in the southern half of the state. She called her organization a “flow-through” in an interview with Mississippi Today in 2018, and said most of the money was going to its “partners,” but the money did not flow to many legitimate organizations, audit reports revealed.

Instead, millions went to her own private businesses and the pet projects of political allies and celebrities, auditors found. That year, the state spent $135 million. The initiative ceased once auditors uncovered the scandal.

By the end of fiscal year 2020, the state’s unspent balance of welfare dollars was back up to $47 million, where it was before the Families First debacle.

Federal spending data for government programs typically publishes at least a year after the fact. As for 2021, Mississippi Today requested every TANF subgrant agreement the agency has signed in the last year, which may be viewed here.