Mississippi zoomed past the previous one-day record of new COVID-19 cases Saturday, with the Mississippi State Department of Health reporting 1,972. The previous record of 1,775 new cases was reported July 30.

The state’s seven-day average of new COVID-19 cases continues to climb toward the numbers seen in this summer’s surge. Saturday, the average neared 1,300 per day. A steep rise in hospitalizations is accompanying the rise in new cases, threatening once again to overwhelm the state’s health care system.

Across the U.S., the surge is gathering speed. Friday, at least 198,500 new cases were reported, another record, and the seven-day average of new cases is quickly approaching 200,000 per day. Cases are rising in 47 states. Hospitalizations are soaring as well, with more than 82,000 patients.

Friday, pharmaceutical giant Pfizer announced it has submitted its application for emergency use of its vaccine to the Federal Food and Drug Administration. Approval is expected to take about three weeks. If approved, the vaccine could be available to high-risk groups such as health-care workers and the elderly before the end of the year.

In Warren County, MSDH reported 16 new COVID-19 cases Saturday and no new deaths. The cumulative number of cases in Warren County to date is 1,707, and the county’s death toll is 56. Although the county has been spared the huge increases seen elsewhere, the 14-day average has risen from about five cases per day to nearly 7 cases in the past few weeks. No deaths have been reported in the county in November.

Statewide, MSDH reported 1,972 new COVID-19 cases Saturday, the highest one-day increase since the crisis began, bringing the total cumulative confirmed cases in Mississippi to 142,401. The seven-day average of new cases is 1,294 per day, about 536 cases and nearly 60% higher than the seven-day average a month ago. The average is on par with numbers seen in July.

The deaths MSDH reported Saturday occurred between Nov. 13 and Nov. 20 in the following counties:

Another six COVID-19 related deaths occurred between Oct. 31 and Nov. 13 and were identified from death certificate reports.

New cases and deaths were reported to MSDH as of 6 p.m. Friday, Nov. 20. MSDH usually reports statistics on the COVID-19 coronavirus each day based on the previous day’s testing and death reports.

Hospitalizations then steadily dropped through Oct. 3 when they began rising again along with increased cases. The last week in October, hospitalizations were levelling off; however, since Nov. 4 hospitals have seen a steady rise in COVID-19 patients once again.

The number of Mississippians hospitalized for the virus as of 6 p.m. Thursday, Nov. 19, was 965, about 80% of the late July peak of about 1,200. The number includes 863 with confirmed cases of COVID-19 and 102 people with suspected but unconfirmed cases. Of those with confirmed infections, 225 were critically ill and in intensive care units and 99 were on ventilators. 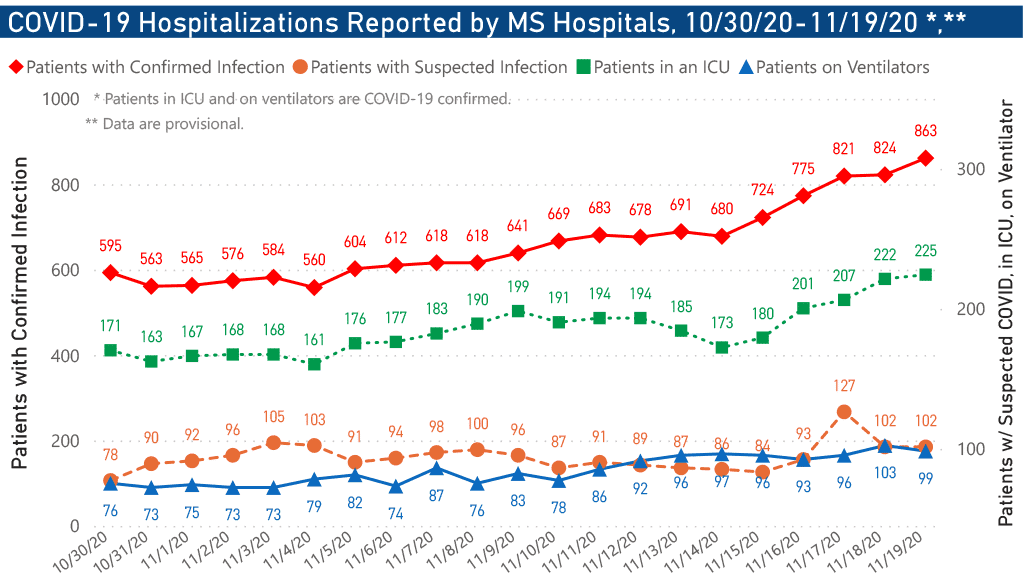 MSDH has estimated the number of people who can be presumed recovered from COVID-19 in Mississippi. That number is 116,683 through Sunday, Nov. 15. It represents about 81.9% of the cumulative 142,401 cases reported as of Saturday, Nov. 21.

The number of cases in Warren County three weeks ago, Saturday, Oct. 31, was 1,576, therefore the estimated number of people presumed recovered in the county is 1,520, or about 89% of the 1,707 cumulative cases reported as of Saturday, Nov. 21. The county has an estimated 131 active cases.

The total number of Mississippians tested for COVID-19 (PCR and antigen tests identifying current infections) as of Saturday, Nov. 14, is 1,165,593 or about 39.2% of the state’s 2.976 million residents. MSDH reports statewide test results once a week. Without daily updated numbers of tests, it is impossible to accurately calculate Mississippi’s positivity rate (positive results to tests, seven-day average); however, the rate was 19.7% Friday, according to Johns Hopkins University. The national rate is 10%, and 5% or lower indicates adequate testing.