The Mississippi State Department of Health reported 98 COVID-19 deaths Tuesday, a new one-day record. After the record number of cases reported in December, the record deaths in January were to be expected. Mississippi’s death toll from the virus is now 5,284.

Tuesday, Warren County reported 27 new COVID-19 cases and one new death. Cumulative totals in the county are 3,279 cases and 91 deaths.

Based on the first 12 days of January, Warren County could see about 1,400 cases by the end of the month, eclipsing monthly totals so far.

Warren County’s 14-day total of new cases is 675 with a daily average of 48.2 cases. The seven-day average is more than 52 cases a day, with 365 cases reported in the past seven days. The county is on the governor’s list of COVID-19 hot spots that include all but four of Mississippi’s 82 counties — Claiborne, Issaquena, Sharkey and Tunica — three of which neighbor Warren.

Nationally, the cumulative cases in the U.S. have soared to more than 22.6 million, with some sources putting the figure as high as 23.1 million. Numbers of new infections, hospitalizations and deaths continue to rise sharply.

The number of people who have died in the U.S. since the beginning of the crisis is about 376,476.

At least 2,048 people died of the virus Monday in the U.S., and at least 222,902 new cases were reported. The numbers of new cases have increased about 37% in the last 14 days. The rate of deaths has also increased, by about 48% in the past two weeks, as has the rate of hospitalizations. About 129,748 people were in the hospital Monday for COVID-19, an increase of 10% in the past two weeks.

For the first time, the U.S. is averaging more than 3,000 deaths per day. California alone has seen more than 3,300 deaths in the past week. Since September, the average numbers of cases have risen steadily from about 35,000 new cases a day to more than 250,000 per day.

The five worst-hit states are scattered around the country: Arizona, California, Oklahoma, Rhode Island and South Carolina are averaging the most daily new cases per person.

A total of 62,744 Mississippians have been inoculated against COVID-19 as of Jan. 12, including 5,730 that have received both required doses. During this first phase of vaccinations, the priority is health care workers, first responders, residents and staff of long-term care facilities, and those 75 years old and older.

About 9 million Americans have received the first dose of one of two COVID-19 vaccines, woefully short of the national goal of 20 million inoculated by the end of December. Additional information about the vaccines can be found on the Centers for Disease Control and Prevention website.

In Warren County, MSDH reported 27 new COVID-19 cases Tuesday and one new death. The cumulative number of cases in Warren County to date is 3,279, and the county’s death toll is 91. The seven-day average of new cases in the county is about 52 per day, more than double the average of cases a month ago.

Statewide, MSDH reported 1,648 new COVID-19 cases Tuesday, bringing the total cumulative confirmed cases in Mississippi to 241,957. The seven-day average of new cases is 2,359 per day, about 14% higher than the seven-day average a month ago. In January, the age group reporting the most cases in Mississippi are from 25 to 39 years old followed by those 50 to 64 years old.

Deaths are a lagging indicator. The current surge began in Mississippi in late October, and nearly 1,000 deaths were reported in December. The state is seeing record deaths in January after record cases in December, with Tuesday’s 98 deaths and 91 deaths Jan. 9.

Of the 98 deaths MSDH reported Tuesday, 52 occurred between Jan. 5 and Jan. 11 in the following counties:

New cases and deaths were reported to MSDH as of 6 p.m. Tuesday, Jan. 11. MSDH usually reports statistics on the COVID-19 coronavirus each day based on the previous day’s and death reports.

The number of Mississippians hospitalized for the virus as of 6 p.m. Sunday, Jan. 10, was 1,424. The number includes 1,370 with confirmed cases of COVID-19 and 54 people with suspected but unconfirmed cases. Of those with confirmed infections, 344 were critically ill and in intensive care units and 221 were on ventilators. 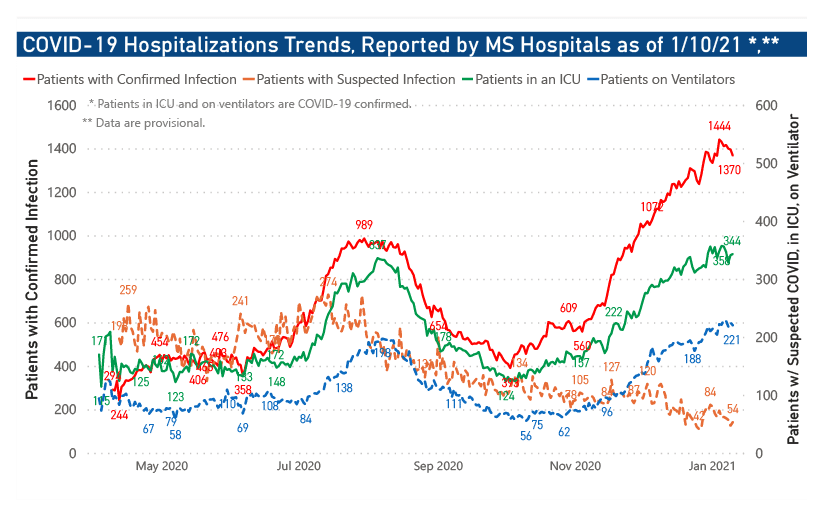 The total number of Mississippians tested for COVID-19 (PCR and antigen tests identifying current infections) as of Saturday, Jan. 10, is 1,903,704 or about 64% of the state’s 2.976 million residents. MSDH reports statewide test results about once a week. Without daily updated numbers of tests, it is impossible to accurately calculate Mississippi’s positivity rate (positive results to tests, seven-day average); however, the estimated rate was 14.9% Monday, according to Johns Hopkins University. The national rate was 13%, and 5% or lower indicates adequate testing.