The number of new COVID-19 cases continues to rise across the U.S., with a 23% increase over the past week and two record-setting days. In Mississippi, the seven-day average is 30% higher now than it was one month ago.

Almost no state is immune to the rise, with 37 states reporting growing numbers of new cases and the other 13 relatively flat, according to Johns Hopkins University data. No state reported statistically significant COVID-19 decreases last week.

The Mississippi State Department of Health reported three new COVID-19 cases Sunday and Monday in Warren County and one new death identified from a death certificate report. The cumulative number of cases in Warren County to date is 1,551, and the county’s death toll is 56.

Statewide, MSDH reported 675 new COVID-19 cases Monday for Sunday and Monday, with 228 reported Sunday and 447 Monday, bringing the total cumulative confirmed cases in Mississippi to 115,763. The seven-day average of new cases is 739, higher by 226 cases or about 30% higher than a month ago.

Most new cases are seen in younger people recesntly, and they are more likely to survive the virus than those 65 and older. By far, the age group reporting the most cases in Mississippi are young people from 18 to 29 years old.

MSDH reported Monday that eight additional Mississippians died of COVID-19 statewide. The cumulative number of deaths in the state is 3,263. The state’s rate of deaths to confirmed cases is about 2.8%.

Of the eight deaths MSDH reported Monday, four occurred between Oct. 11 and Oct. 25 in the following counties:

Another four COVID-19 related deaths occurred between Aug. 29 and Oct. 6 and were identified from death certificate reports.

New cases and deaths were reported to MSDH as of 6 p.m. Saturday, Oct. 24, and Sunday, Oct. 25. MSDH usually reports statistics on the COVID-19 coronavirus each day based on the previous day’s testing and death reports.

The number of Mississippians hospitalized for the virus as of 6 p.m. Friday, Oct. 23, is 679, more than half of the late July peak of about 1,200. The number includes 580 with confirmed cases of COVID-19 and 99 people with suspected but unconfirmed cases. Of those with confirmed infections, 157 were critically ill and in intensive care units and 66 were on ventilators. 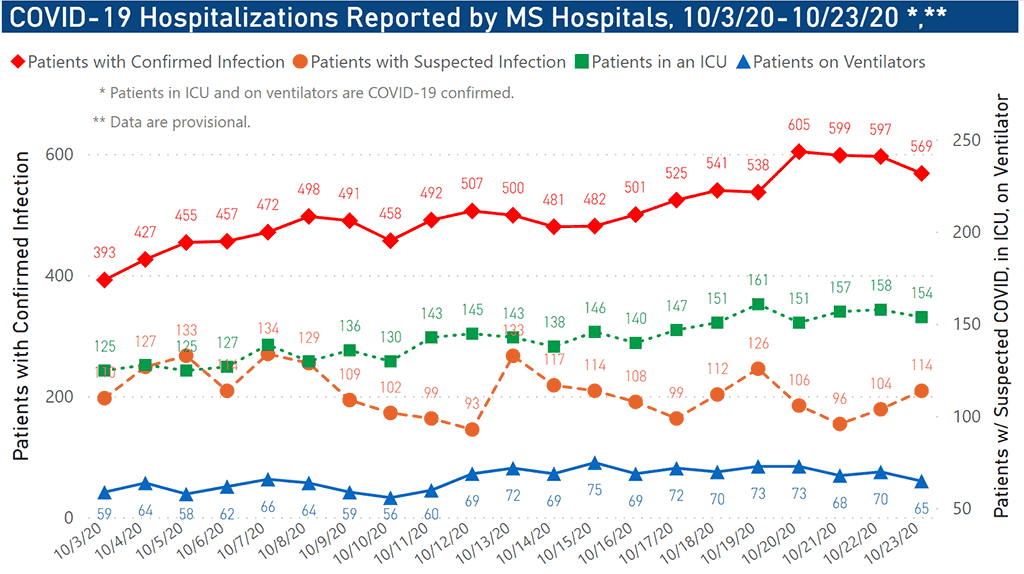 MSDH has estimated the number of people who can be presumed recovered from COVID-19 in Mississippi. That number is 101,385 through Sunday, Oct. 25. This figure is updated weekly. It represents about 87.6% of the cumulative 115,763 cases reported as of Monday, Oct. 26.

The number of cases in Warren County three weeks ago, Monday, Oct. 5, was 1,431, therefore the estimated number of people presumed recovered in the county is 1,375, or about 88.7% of the 1,551 cumulative cases reported as of Monday, Oct. 26. The county has an estimated 120 active cases.

The total number of Mississippians tested for COVID-19 (PCR and antigen tests identifying current infections) as of Saturday, Oct. 10 (the latest testing results reported by MSDH), is 900,479 or about 30.3% of the state’s 2.976 million residents. Without an updated number of tests, it is impossible to accurately calculate Mississippi’s positivity rate (positive results to tests, seven-day average), however, the rate was 16.6% Thursday according to Johns Hopkins University. The national rate is 6.2%, and 5% or lower indicates adequate testing.