Nationally, the virus continues to break records from coast to coast. More than 181,000 new cases were reported Friday along with 1,389 new deaths. All the COVID-19 statistics are skyrocketing as the cumulative case count approaches 11 million and deaths near 250,000, by far the highest COVID-19 numbers in the world.

“It’s getting bad and it’s potentially going to get a lot worse,” Jennifer Nuzzo, an epidemiologist and senior scholar at the Johns Hopkins Center for Health Security, told The New York Times. “The months ahead are looking quite horrifying.”

Warren County has so far been relatively unaffected by the soaring new case and death counts. The average for the first two weeks in November remains just barely over five cases per day, and the last death recorded in the county was Oct. 26.

In Warren County, the Mississippi State Department of Health reported 11 new COVID-19 cases Saturday and no new deaths. The cumulative number of cases in Warren County to date is 1,649, and the county’s death toll is 56.

Statewide, MSDH reported 1,370 new COVID-19 cases Saturday, bringing the total cumulative confirmed cases in Mississippi to 133,340. The seven-day average of new cases is 1,065, 60% higher than the seven-day average a month ago, and on par with numbers in late July and early August.

MSDH reported Saturday that 21 more Mississippians died of COVID-19 statewide. The cumulative number of deaths in the state is 3,540. The state’s rate of deaths to confirmed cases is about 2.7%.

Of the 21 deaths MSDH reported Saturday, 11 occurred between Oct. 22 .and Nov. 13 in the following counties:

Ten COVID-19 related deaths occurred between Aug.15 and Nov. 9 and were identified from death certificate reports.

New cases and deaths were reported to MSDH as of 6 p.m. Friday, Nov. 13. MSDH usually reports statistics on the COVID-19 coronavirus each day based on the previous day’s testing and death reports.

The number of Mississippians hospitalized for the virus as of 6 p.m. Thursday, Nov. 12, was 774, about 65% of the late July peak of about 1,200. The number includes 678 with confirmed cases of COVID-19 and 89 people with suspected but unconfirmed cases. Of those with confirmed infections, 194 were critically ill and in intensive care units and 92 were on ventilators. 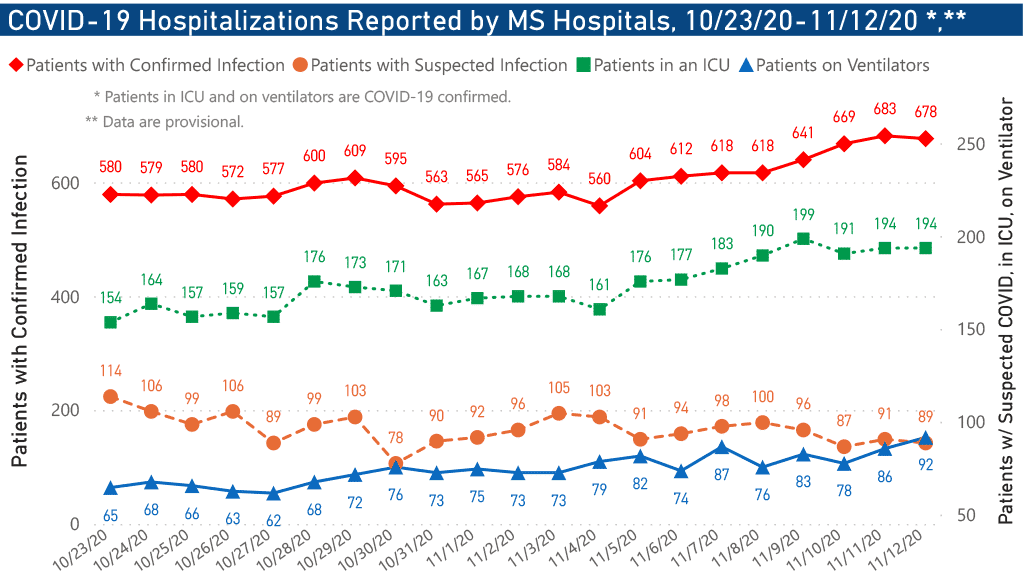 MSDH has estimated the number of people who can be presumed recovered from COVID-19 in Mississippi. That number is 111,430 through Sunday, Nov. 8. This figure is updated weekly. It represents about 83.6% of the cumulative 133,340 cases reported as of Saturday, Nov. 14.

The number of cases in Warren County three weeks ago, Saturday, Oct. 24, was 1,548, therefore the estimated number of people presumed recovered in the county is 1,492, or about 90.5% of the 1,649 cumulative cases reported as of Saturday, Nov. 14. The county has an estimated 101 active cases.

The total number of Mississippians tested for COVID-19 (PCR and antigen tests identifying current infections) as of Saturday, Nov. 7 (the latest statewide testing results reported by MSDH), is 1,105,638 or about 37.2% of the state’s 2.976 million residents. Without daily updated numbers of tests, it is impossible to accurately calculate Mississippi’s positivity rate (positive results to tests, seven-day average), however, the rate was 16.3% Friday, according to Johns Hopkins University. The national rate is 9.5%, and 5% or lower indicates adequate testing.