Nationally, the pandemic continues to break records for cases and hospitalizations. More than 142,000 new cases were reported Wednesday, and 65,368 Americans were hospitalized. Hospitalizations have more than doubled in just over a month. The seven-day average for new cases is nearly 70% higher than the average two weeks ago. At least 1,431 deaths were reported Wednesday nationwide, an increase of 36% in two weeks.

In Warren County, the Mississippi State Department of Health reported four new COVID-19 cases Thursday and no new deaths. The cumulative number of cases in Warren County to date is 1,634, and the county’s death toll is 56.

Statewide, MSDH reported 1,271 new COVID-19 cases Thursday, bringing the total cumulative confirmed cases in Mississippi to 130,665. The seven-day average of new cases is 968.3, 321 cases higher than a month ago and on par with numbers in late July and early August.

MSDH reported Thursday that 17 more Mississippians died of COVID-19 statewide. The cumulative number of deaths in the state is 3,514. The state’s rate of deaths to confirmed cases is about 2.7%.

Of the 17 deaths MSDH reported Thursday, 16 occurred between Nov. 5 and Nov. 11 in the following counties:

One additional COVID-19 related death occurred Nov. 5 in Madison County and was identified from a death certificate report.

New cases and deaths were reported to MSDH as of 6 p.m. Wednesday, Nov. 11. MSDH usually reports statistics on the COVID-19 coronavirus each day based on the previous day’s testing and death reports.

The number of Mississippians hospitalized for the virus as of 6 p.m. Tuesday, Nov. 10, was 756, well over half of the late July peak of about 1,200. The number includes 669 with confirmed cases of COVID-19 and 87 people with suspected but unconfirmed cases. Of those with confirmed infections, 191 were critically ill and in intensive care units and 78 were on ventilators. 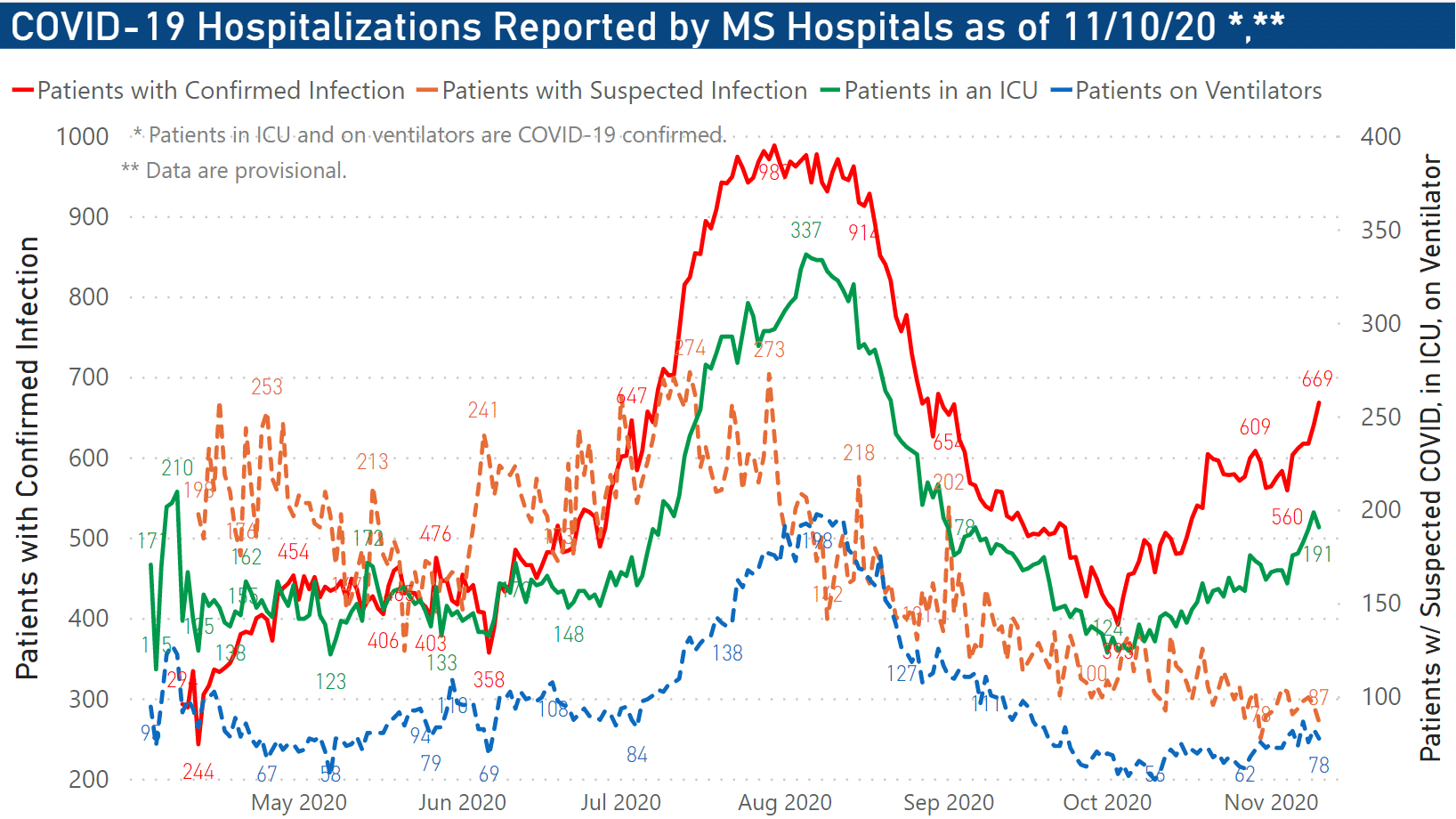 MSDH has estimated the number of people who can be presumed recovered from COVID-19 in Mississippi. That number is 111,430 through Sunday, Nov. 8. This figure is updated weekly. It represents about 85.3% of the cumulative 130,665 cases reported as of Thursday, Nov. 12.

The number of cases in Warren County three weeks ago, Thursday, Oct. 22, was 1,536, therefore the estimated number of people presumed recovered in the county is 1,480, or about 90.6% of the 1,634 cumulative cases reported as of Thursday, Nov. 12. The county has an estimated 98 active cases.

The total number of Mississippians tested for COVID-19 (PCR and antigen tests identifying current infections) as of Saturday, Nov. 7 (the latest statewide testing results reported by MSDH), is 1,105,638 or about 37.2% of the state’s 2.976 million residents. Without daily updated numbers of tests, it is impossible to accurately calculate Mississippi’s positivity rate (positive results to tests, seven-day average), however, the rate was 16.3% Wednesday, according to Johns Hopkins University. The national rate is 8.7%, and 5% or lower indicates adequate testing.