Mississippi ended the month of October with an increase of 44% in new COVID-19 cases from the previous month and a cumulative case total of more than 120,000 since the crises began. The Magnolia state reported 21,970 new COVID-19 cases during October, and the average number of new cases reported daily was 708.7.

The increase in new cases started becoming obvious around Oct. 10 when the seven-day average topped 600. It stayed above that for the remainder of the month, rising to almost 800 the last week. In comparison, during September Mississippi reported 15,240 cases, with a daily average of 508 cases.

Statewide, MSDH reported 824 new COVID-19 cases Saturday, bringing the total cumulative confirmed cases in Mississippi to 120,160. The seven-day average of new cases is 724.6. The average of reported new cases for the month of October is 708.7, higher by 200.7 cases in September.

MSDH reported Saturday that six more Mississippians died of COVID-19 statewide. The cumulative number of deaths in the state is 3,334. The state’s rate of deaths to confirmed cases is about 2.8%.

The deaths MSDH reported Saturday occurred between Oct. 28 and Oct. 30 in the following counties:

New cases and deaths were reported to MSDH as of 6 p.m. Friday, Oct. 30. MSDH usually reports statistics on the COVID-19 coronavirus each day based on the previous day’s testing and death reports.

The number of Mississippians hospitalized for the virus as of 6 p.m. Friday, Oct. 30, is 673, more than half of the late July peak of about 1,200. The number includes 595 with confirmed cases of COVID-19 and 78 people with suspected but unconfirmed cases. Of those with confirmed infections, 171 were critically ill and in intensive care units and 76 were on ventilators. 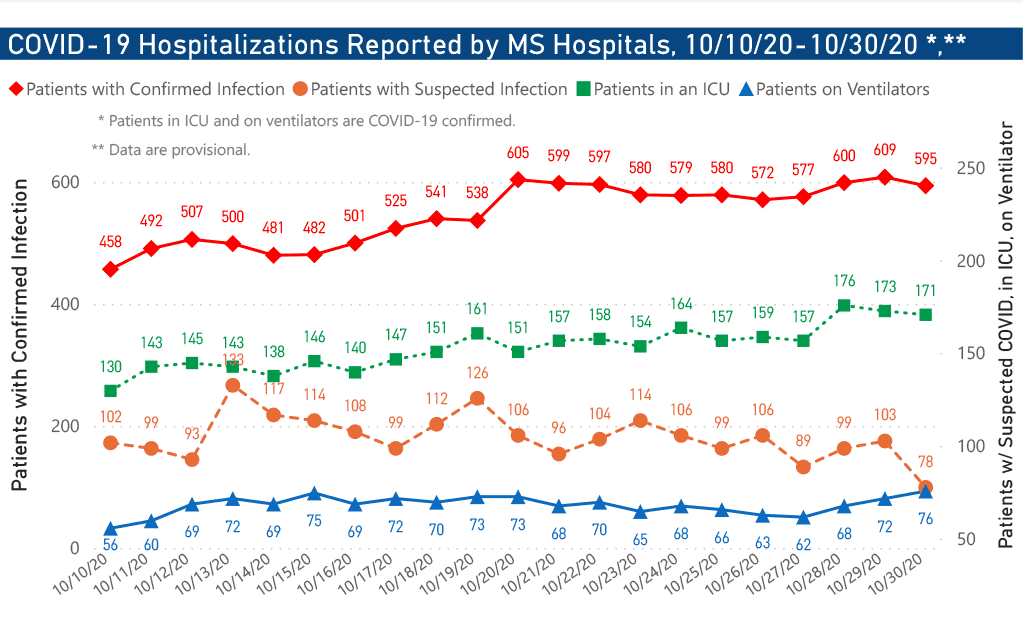 MSDH has estimated the number of people who can be presumed recovered from COVID-19 in Mississippi. That number is 101,336 through Sunday, Oct. 25. This figure is updated weekly. It represents about 84.4 % of the cumulative 120,160 cases reported as of Saturday, Oct. 31.

The number of cases in Warren County three weeks ago, Saturday, Oct. 10, was 1,467, therefore the estimated number of people presumed recovered in the county is 1,411, or about 89.5% of the 1,571 cumulative cases reported as of Saturday, Oct. 31. The county has an estimated 109 active cases.

The total number of Mississippians tested for COVID-19 (PCR and antigen tests identifying current infections) as of Saturday, Oct. 24 (the latest testing results reported by MSDH), is 1,002,327 or about 33.7% of the state’s 2.976 million residents. Without an updated number of tests, it is impossible to accurately calculate Mississippi’s positivity rate (positive results to tests, seven-day average); however, the rate was 6.8% Friday, according to Johns Hopkins University. The national rate is 6.4%, and 5% or lower indicates adequate testing.