The state’s seven-day average of new COVID-19 cases continues to climb toward numbers seen in this summer’s surge. Friday, the average topped 1,200 as the Mississippi State Department of Health reported more than 1,600 new cases. A steep rise in hospitalizations is accompanying the rise in new cases, threatening once again to overwhelm the state’s health care system.

Across the U.S., the daily average of new cases is quickly approaching 200,000 per day as cases are rising in 47 states. Hospitalizations are soaring as well, with more than 80,000 patients. COVID-19 is now the third-leading cause of death in the U.S., a new report from the Kaiser Family Foundation revealed, behind heart disease and cancer.

In Warren County, MSDH reported 10 new COVID-19 cases Friday and no new deaths. The cumulative number of cases in Warren County to date is 1,691, and the county’s death toll is 56.

Statewide, MSDH reported 1,638 new COVID-19 cases Friday, bringing the total cumulative confirmed cases in Mississippi to 140,429. The seven-day average of new cases is 1,208 per day, about 439 cases higher than the seven-day average a month ago, and on par with numbers in July.

Of the 23 deaths MSDH reported Friday, 17 occurred between Nov. 14 and Nov. 19 in the following counties:

Six COVID-19 related deaths occurred between Oct. 31 and Nov. 13 and were identified from death certificate reports.

New cases and deaths were reported to MSDH as of 6 p.m. Thursday, Nov. 19. MSDH usually reports statistics on the COVID-19 coronavirus each day based on the previous day’s testing and death reports.

The number of Mississippians hospitalized for the virus as of 6 p.m. Wednesday, Nov. 18, was 948, nearly 80% of the late July peak of about 1,200. The number includes 824 with confirmed cases of COVID-19 and 102 people with suspected but unconfirmed cases. Of those with confirmed infections, 222 were critically ill and in intensive care units and 103 were on ventilators. 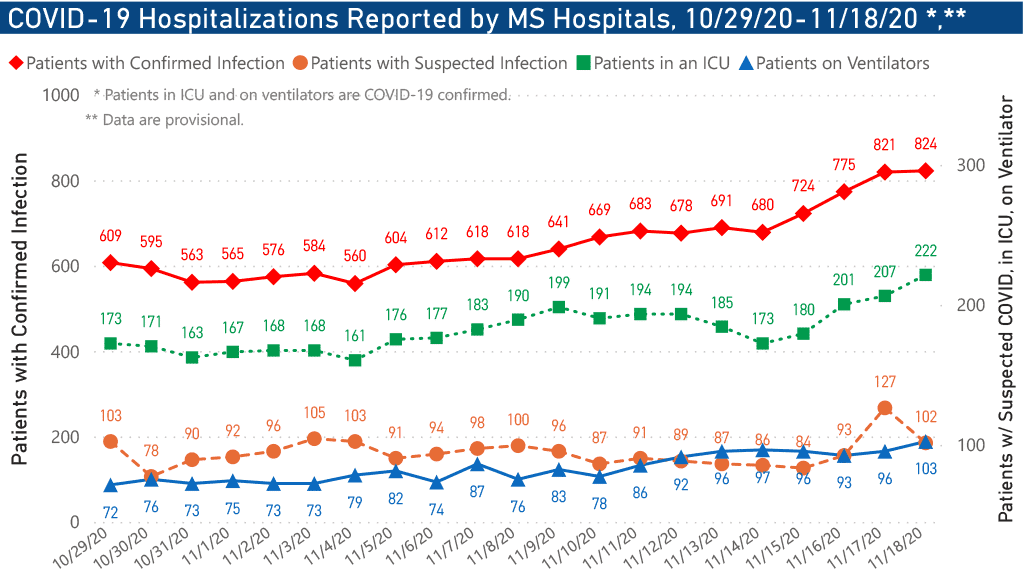 MSDH has estimated the number of people who can be presumed recovered from COVID-19 in Mississippi. That number is 116,683 through Sunday, Nov. 15. It represents about 83.1% of the cumulative 140,429 cases reported as of Friday, Nov. 20.

The number of cases in Warren County three weeks ago, Friday, Oct. 30, was 1,571, therefore the estimated number of people presumed recovered in the county is 1,515, or about 89.6% of the 1,691 cumulative cases reported as of Friday, Nov. 20. The county has an estimated 120 active cases.

The total number of Mississippians tested for COVID-19 (PCR and antigen tests identifying current infections) as of Saturday, Nov. 14, is 1,165,593 or about 39.2% of the state’s 2.976 million residents. MSDH reports statewide test results once a week. Without daily updated numbers of tests, it is impossible to accurately calculate Mississippi’s positivity rate (positive results to tests, seven-day average); however, the rate was 19.7% Thursday, according to Johns Hopkins University. The national rate is 10%, and 5% or lower indicates adequate testing.