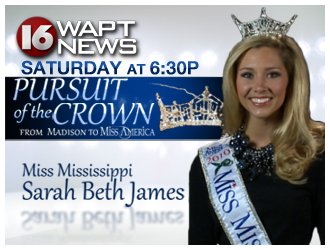 The finals of the competition will be broadcast on ABC tonight at 8:00 pm (CST).  Our local ABC affiliate, WAPT-16 will broadcast a special Miss Mississippi 2010, Sarah Beth James, titled Pursuit of The Crown: From Madison to Miss America. The staff of the Vicksburg Daily News is very excited about the pageant returning to broadcast television.  The Miss America Pageant, a long-time staple of broadcast, has lost popularity in recent years.  The loss of interest in the competition led CBS to make the decision to cut the pageant from its airwaves.  The pageant moved to two different cable networks, CMT & TLC, both of whom created reality-based series to bolster interest, before making the move to ABC. Miss America partnered with Children’s Miracle Network in 2009 and has been mildly successful in revamping their image.  The organization, led by Amory native, Sam Haskell, has taken huge steps toward making Miss America more available to and approachable by the general public. As the world’s largest provider of scholarship assistance for young women and one of the nation’s leading achievement programs, the Miss America Organization last year made available more than $45 million in cash and scholarship assistance. According to their website, “the Miss America Organization provides young women with a vehicle to further their personal and professional goals and instills a spirit of community service through a variety of nationwide community-based programs.” The Miss Mississippi Corporation, the parent company of the Miss Mississippi and Miss Mississippi’s Outstanding Teen Pageants, has been the leader among all Miss America franchises for a number of years.  The Miss Mississippi Corporation was able to award over $97,000.00 in scholarships this past year. Additional information about the Miss America Organization can be found at www.MissAmerica.org Additional information about the Miss America Organization can be found at www.MissMississippiPageant.org And from us here at the Vicksburg Daily News… Good Luck, Sarah Beth!!!]]]]> ]]>