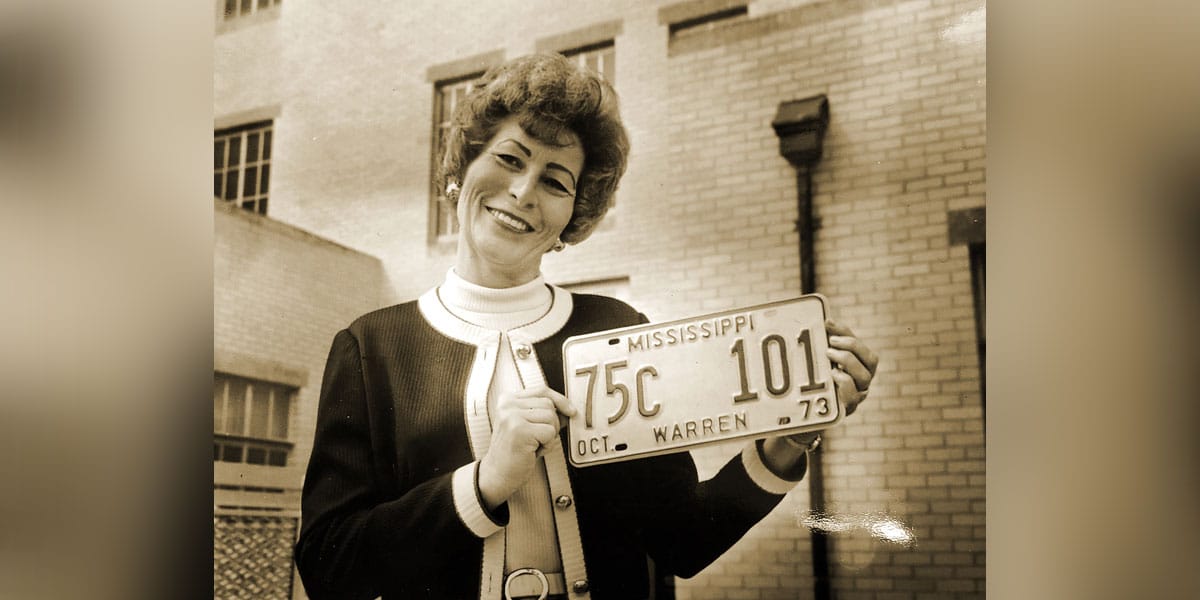 “I’m thinking of running for the office of tax collector,” the voice on the phone said. “What do you think about this?”

The caller was Marguerite Stegall, a longtime friend. The legislature had separated the office of sheriff and tax collector, which had been state law since the 1890s. The new law took effect in 1971, with the winner taking office in 1972.

Marguerite had plenty of experience. She had majored in office management classes at Southwest Junior College in Summit, and in Vicksburg she had run the office for former Sheriff John Hynes Henderson Jr.

There were many things to think about in the upcoming race, one of which was that a woman had never been elected to countywide office in Warren County. A half-dozen or so men had already stated that they planned to run.

I reminded Marguerite that only one person could win, and then I asked, “Are you prepared to lose? Could you handle defeat?” Her instant reply was, “I’m not going to lose.”

Marguerite was from Gloster, and she married Oree Stegall from Crystal Springs. They moved to Vicksburg where he had an industrial job. He and Marguerite raised two daughters, Sherry and Connie. The girls went to school at Culkin, and the family were members of Shiloh Primitive Baptist Church where Oree was a deacon and Marguerite was church clerk.

The typical, tranquil life all changed when Oree was killed in an industrial accident. 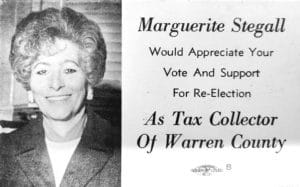 A campaign card for her reelection made no promises. She always says her only promise was to do the best job for voters. (Photo courtesy Gordon Cotton)

I had never tried my hand before at advertising, but I agreed to handle Marguerite’s ads in the local paper and on the radio.

It was a lively campaign. Most of her male opponents were well-known and popular. There were few doors in Vicksburg and Warren County that weren’t knocked on by Marguerite or her daughters. Things looked good for her, but Charlie Faulk, editor of the Vicksburg Post told me that in a straw pole at the Lions Club, Mrs. Stegall didn’t do very well.

“What do you think of that?” he asked.

My reply: “I don’t think the members of that club are representatives of the voters in Warren County.”

I was right. When the votes were counted for the first primary, Marguerite was the leader, and though she had a runoff vote she almost won in the first primary. She won the election, taking office in January 1972. In future elections she had little opposition winning easily for several terms. Because of health issues she resigned in November 1993, and Pat Simrall was appointed to take her place.

Marguerite served three or four terms and faced little opposition. She made sure her staff were capable and courteous.

No one told her she had to do this, but among the workers was a Black lady, Delores Nichols. Marguerite had simply done the right thing in breaking the color barrier among office personnel.

Marguerite was active in the state organization of tax collectors and was in the lead in persuading the legislature to abandon the practice of a vehicle owner having to buy a new metal tag each year. A small sticker would be a lot less expensive and simply made good sense.

Her efficiency was noted by the state, and she was honored by having the most efficiently-operate tax collector’s office in Mississippi.

I knew Marguerite best through church as we were both members of Shiloh Primitive Baptist on Warriors’ Trail. Most of the congregations of our denomination do not take up collections — we just put money on the alter after services. I was treasurer for a number of years, and others didn’t know it, but Marguerite quietly paid all the utility bills.

I recall a few lighthearted moments. One evening she took several of us to a church meeting in Jackson. Archie Anderson was driving — he was a high school student — and she was giving directions. He just about lost it — as did the rest of us — when Marguerite told him to turn off Highway 55 “onto Fornication Street.” Of course she meant Fortification.

At church we sing a lot — for about 30 minutes with no interruptions — and the hymns are chosen by the congregation. Whatever number is heard gets sung next. Marguerite was always quick with her favorites. Most people have the habit of sitting in the same place each Sunday, and after Marguerite’s death I discovered, in the hymnal holder, a list of her favorite hymns and their numbers. I had to laugh — she had a cheat sheet!

She once gave me good advice concerning a business meeting. If there is any disagreement, have the chair recognize you, and raise your voice an octave and the opposition will usually melt.

When Marguerite died, her daughters asked me to be one of the speakers at her funeral. I don’t recall much of what I said except for my closing remark: If you look up the meaning of public servant, the answer should be Marguerite Stegall.