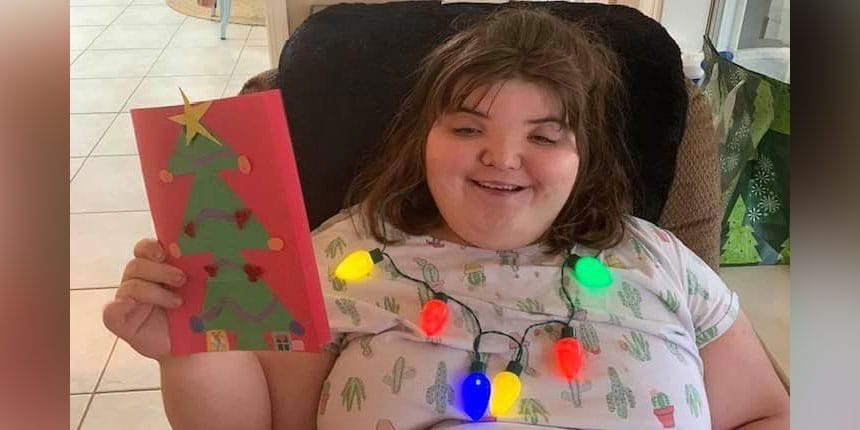 Mallory Cessna (with permission from A. Cessna)

While most children have already written their letters to Santa asking for expensive gifts like iPads, video games, and 4-wheelers, one special Vicksburg girl wants something a lot easier on Santa’s wallet. Mallory Cessna just wants to receive cards and feel loved.

Mallory is the 18-year-old daughter of Joey and Ashley Cessna, both of Vicksburg. She was born Dec. 27, 2001, and because of her appearance, it didn’t take her parents long to realize something was wrong.

“Mallory had a CT scan which showed Bi-Coronal Synostosis. It’s a form of Craniosynostosis where two of her skull bones (soft spots) fused together prematurely,” Ashley said. “We didn’t realize the full extent of what was happening, but we knew we had just started a life-long journey that would cause problems for our little girl.”

“It just so happened that our Sunday school teacher at the time, Debra Lee, knew someone with a similar condition,” Ashley added. “That person directed us to Mallory’s surgeon, Dr. Kenneth Salyer.”

Salyer is the leading craniofacial surgeon at Dallas Medical City, a world-renowned facility in Texas where Mallory would go for check-ups for the next 18 years.

Ashley said Mallory had been developmentally delayed since birth, so they decided to have genetic testing done. It was discovered that she has a rare syndrome called Sathre Chotzen Syndrome. She developed a new mutation that happened at conception — a deletion twist on chromosome 7. This resulted in short fingers, droopy eyelids, broad toes and muscle weakness among other anomalies.

Mallory started the Early Education Intervention program at Beechwood Elementary at 6 months old, and over the years she won the hearts of students, teachers, staff and parents alike with her sweet nature and giant heart. 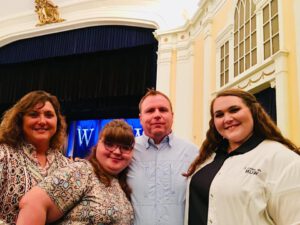 Mallory with her parents and big sister, Logan
(with permission from A. Cessna)

Liz Clark Testa, a former special education teacher with the Vicksburg Warren School District, said, “Mallory is just … kind. Like, very kind.  She always thinks of others and has the most giving heart.”

Unfortunately, her health battle was far from over. When she was 4-years-old, she developed a constant bout with pneumonia. A few months later, she was diagnosed with meningitis.

“It was by far the scariest thing we’d been through. I had been keeping her with a sitter because she was so sick from the pneumonia. I came home from work one day and she was unresponsive. An ambulance rushed her to the hospital where they did a spinal tap and found out it was the worst kind — bacterial,” Ashley said.

Ashley said Pastor Terry White of Bowmar Baptist Church met her in the chapel and prayed with her for a very long time.

Mallory was airlifted to Batson Children’s Hospital in Jackson and doctors immediately put in a temporary shunt to drain the infected fluid around her brain. She was put into a medically induced coma for two weeks. The X-ray the Cessnas had brought from Vicksburg showed she had also suffered three mini strokes.

“Once she was stabilized and could go in a regular room we were just waiting on her to wake up. One night after about two weeks I heard her say ‘mama’ in the middle of the night. This is when I knew she’d be OK,” Ashley tearfully recalled. “The terrific doctors and nurses deserve so much credit, but the highest credit goes to God.”

The following year when she was 6, she had her last surgery for craniosynostosis. She had a mid-face advancement in which they lifted her eyebrow bones and restructured the front of her face.

By then, Mallory was attending Dana Road Elementary where Ashley was a teacher. Mallory won the hearts of everyone at Dana Road just as she had at Beechwood.

Her fans aren’t limited to people she’s touched at school, though. Mallory is well-known all over Vicksburg for her infectious smile, kind heart, and love of music and dance. Her family is no longer surprised when everywhere they go, people know and love Mallory. And Mallory loves them right back. 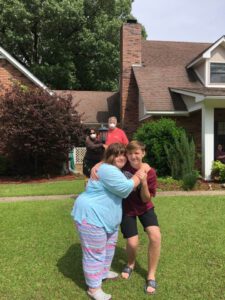 Mallory with her brother, Landon
(with permission from A. Cessna)hi

“Mallory is a sweet soul,” said Jennifer Cain, a teacher at Warren County High School. “She is just full of laughter, personality and Jesus. She just makes the people she’s around want to be better people.”

“Mallory has such a tender heart,” said former teacher Testa. “If her classmates came to school upset she would hug them and do her best to make them feel better. And let me tell you, she LOVES to dance. Christian music and pop, the girl loves to get up and move!”

“Meningitis left her completely deaf in one ear, but that doesn’t affect her love for music at all,” Ashley said.

Mallory’s struggles weren’t over yet. At a routine check-up when she was 12, she was diagnosed with Chiari Malformation. This is when the brain “sags” down into the spinal column opening.

She endured yet another surgery to open some bone up to give her brain more room. This surgery wasn’t successful, so she had another surgery six months later. Dr. Dale Swift at Children’s Hospital in Dallas removed more bone on the C1 and C2 spinal vertebrae to help alleviate the the problem.

Mallory’s problems were still far from over.

On top of everything else, this year Mallory contracted COVID-19.

“She started running a fever on a Thursday and by the following Tuesday she had been admitted to PICU (pediatric intensive care unit) at Batson,” Ashley said. “They put her on BiPAP and she was so scared. She didn’t eat or drink for about six days. We spent almost two weeks there. I had to sign a form just so she could get the strong meds that would hopefully fight the virus,” Ashley added.

After leaving Batson, Mallory remained on oxygen for a little over a month.

But again, Mallory’s problems were still not over.

Ashley explained “After just recovering from COVID-19 she slipped on the floor and broke her ankle in two places. I took her to an orthopedic doctor at Batson for a follow-up and they admitted her that day to have surgery the next morning.”

She is recovering at home and will go to the doctor Monday for her two-week checkup, where the Cessnas are hoping she’ll be able to have the cast removed and get a walking cast.

If anyone expected all of Mallory’s health issues to slow her down, they obviously have never met her. 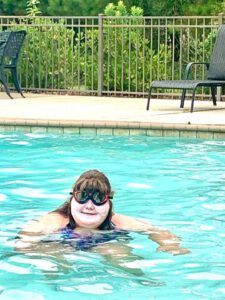 (used with permission from A. Cessna)

Mallory has long been a fixture when Big Blue, Warren Central’s marching band, performs. It began when her sister, Logan, was a member of the band’s color guard. She now enjoys cheering on her younger brother, 16-year-old Landon.

Ashley said Logan has always been Mallory’s biggest supporter, and it goes both ways. When Logan was at Mississippi State University in Starkville, fellow members of the famous Maroon Band’s color guard made Mallory an honorary member complete with her own flag.

Logan graduated with a science degree from MSU, and she is now in her last semester at the Mississippi University for Women. She’ll graduate with her BSN, RN degree. Logan chose nursing as a way to honor her sister and wants to be able to help others like her.

Classmates and teachers at Warren Central all recognize how special Mallory is and fell in love with her sweet spirit. Lyndsey Nosser, a teacher and cheerleader sponsor, created a special spot for Mallory to be a WCHS cheerleader.

After transferring to Vicksburg High School this year, music director Angela Chapin grew to love Mallory and gave her a role to pass out brochures at the school’s performance of “Frozen.”

“Mallory just loved seeing her name in print in the program,” Ashley said. “Things like that mean the world.”

Ashley and Joey say they rely on their faith in God when things are especially difficult. So it’s no surprise that Mallory’s favorite place to be is at church.

“She loves Pastor Robert at Elevate, and Pastor Tim at Momentum in Florida” Ashley said. “My mom, Mallory’s Mimi, has also had a great impact on Mallory’s life and teaching her to love the Lord.”

“We can also credit all of Mallory’s singing and dance moves to her Mimi. Mallory is a great reflection of my mom,” Ashley said with a smile.

Younger brother, Landon, has been home a lot because he’s taking college courses at River City Early College. This has been a blessing for the Cessnas as Mallory is dependent on others for many common daily tasks. Landon lifts her when necessary and does just about anything else his sister may need.

In addition to loving God, music and dancing, Mallory loves to travel and swim. She also loves to make people happy which she does easily by flashing her genuine smile and infectious laugh.

It hasn’t been an easy journey, and many said it’s one she’d never make, but Mallory Cessna will turn 19 on Dec. 27. All she wants for her birthday is to get a lot of cards and feel a lot of love.

Imagine the love she’d feel if all of the people in Vicksburg that have been touched by this amazing girl’s spirit drove by her house for her birthday with decorated vehicles, balloons, signs and cards.

Mallory’s family invites everyone to participate in a drive-by parade to celebrate her 19th birthday on Tues., Dec. 29 at 1 p.m. The address is 14 Grandview Drive in Vicksburg. The family also requests no gifts or gift cards. They said all they and Mallory want is to feel a lot of love.