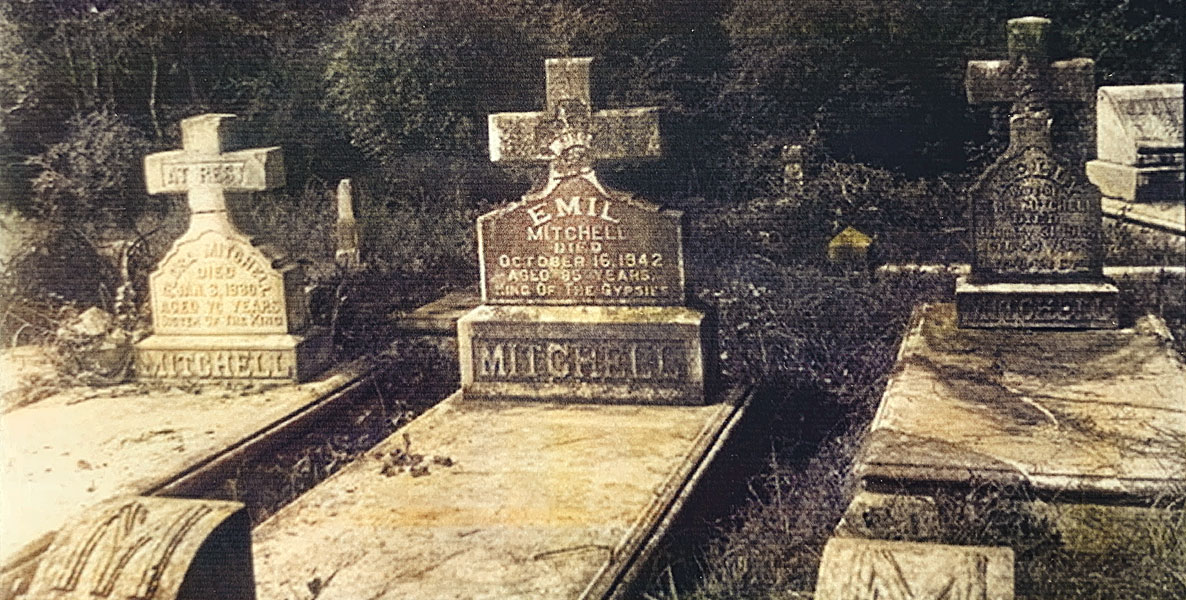 “I’m going to wait here in the car. The Gypsy graves are at the top of the hill, on the left,” Mrs. Elsie McWilliams told me in Meridian many years ago. I had gone to Meridian to interview her as she had written many of the hits recorded by her brother-in-law, Jimmy Rogers.

There were some Roma (once called Gypsy) graves in Meridian, and I wanted to see them. Miss Elsie rode with me to the cemetery. Weeds and undergrowth covered the hill, and a badly rutted gravel drive led between two brick pillars up the shaded drive.

Two stones, each topped with marble crosses, marked the graves. On each was carved a crown. “King of the Gypsies” is engraved on one stone and of the other is “Queen of the Gypsies.”

Visitors had been there, and someone had left a cup of tea on the Queen’s grave. It had evaporated, leaving the leaves in the cup, probably so whoever left the cup could come back and read the tea leaves.

I was going to photograph the graves, and the cup covered part of the epitaph. I moved the cup and jokingly said, “I hope you don’t mind, your Majesty.”

That’s when I just about jumped out of my skin. Miss Elsie had changed her mind, had walked up the hill (I had not noticed) and was standing right behind me when she said something.

The Queen, Kelly Mitchell, was buried there in 1915 after her death in nearby Coatopa, Alabama. She was 47 and, despite her age, was said to have died in childbirth. A local doctor was promised $10,000 if he could save her life, but he couldn’t.

Queen Kelly’s funeral was probably one of the most lavish events in Mississippi history. Her body lay in state at a Meridian funeral home where candelabras at the head and the foot of her silver­ trimmed metal casket burned day and night. A Meridian newspaper reported that she was beautiful with high cheekbones and a swarthy complexion. Her head was covered with silk, pinned at the back with solid gold pins. Into her braided black hair were woven Russian, French and Portuguese coins dating from 1750 to 1820.

The newspaper article said she was “robed in death with all the barbaric splendor of a medieval queen.” She was dressed in a bright red robe trimmed in yellow. Gold coins, sewed with gold thread, laced the gown and “sacred linen,” which was used only at death, draped the lower part of her body.

Two necklaces, one of gold coins and the other of shells, both tribal heirlooms, were around her neck. Each of the Queen’s children (there were 15) came to the casket and placed a piece of jewelry by their mother’s body. The youngest child tenderly put golden earrings on the Queen’s ears.

As there was no Orthodox congregation in Meridian, funeral services were held at St. Paul’s Episcopal Church. Following the Christian ceremony, all the rites of the Brazilian Indians, from whom the Queen was descended, were performed.

Two black horses pulling a black hearse carried the body to Rose Hill Cemetery behind which was a Roma band, followed on foot by the King and the immediate family. The women and children rode in carriages. At the proper time the band switched from playing mournful dirges to spirited Roma music. It was estimated that 20,000 Roma came from all over the United States.

Twenty-seven years later King Emil, 85, died at Sand Mountain, Alabama. Born in a tent in Rio de Janeiro, he had come to New Orleans with his roaming parents when he was 5. He left the world the way he entered it — in a tent.

His funeral was not so lavish as the country was at war. He was buried in a gold casket, and before his body was lowered into the grave, he was very generously sprinkled with wine “so the King will have something to drink on the way to the other side.”

Approximately $900,000 worth of jewelry and gold is supposed to be buried with the Queen, and her grave and the King’s, which are side by side, were sealed with many layers of steel-reinforced concrete. Vandals have attempted to break through to the graves, but none have succeeded.

Other members of the Royal Family have also been buried there, but not in such lavish style. Most of the tribe are said to live in Missouri and Oklahoma.

Perhaps Queen Kelly could have read the tea leaves in life, but in death she hasn’t told her secrets. Like her jewels, they remain buried with her.