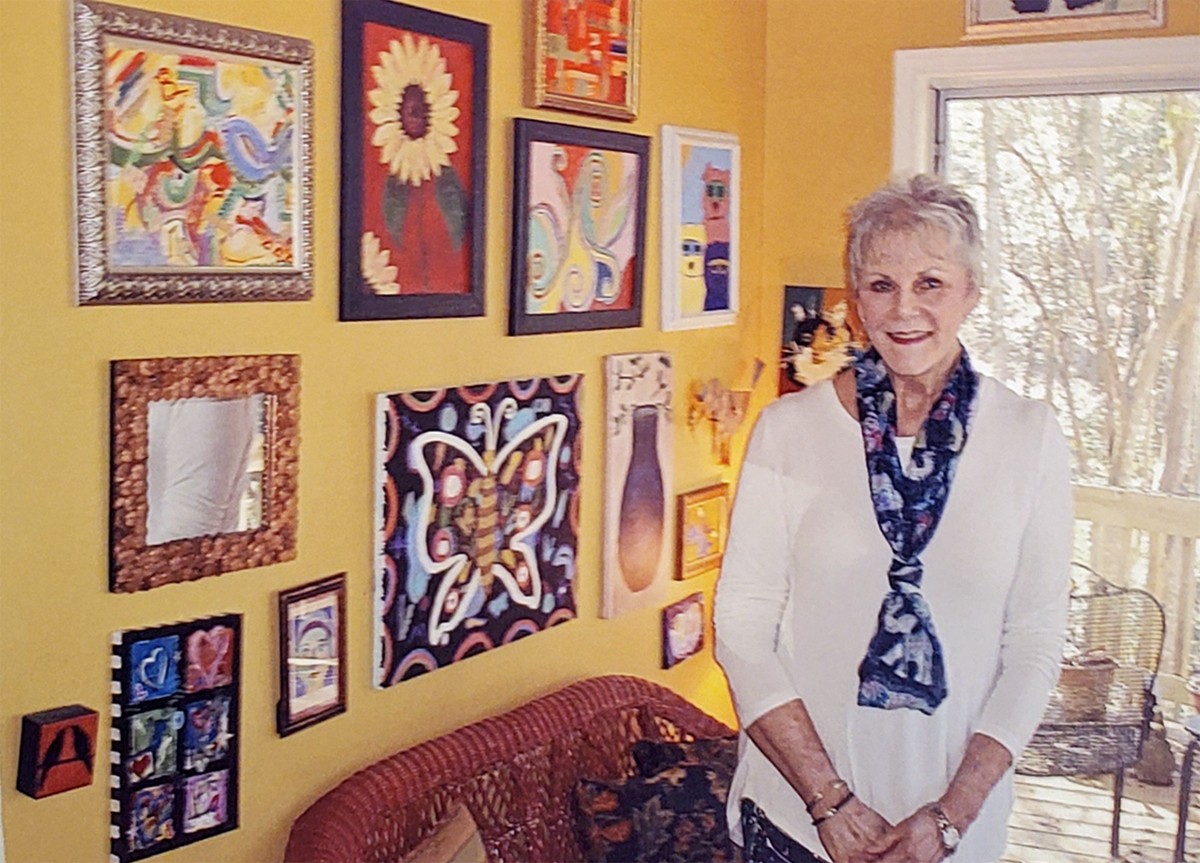 The walls of Lenore Barkley’s home are decorated with art, making it a virtual gallery.

The colors she uses are vivid and bright—red, yellow, green, blue, purple, orange, pink—all the colors of the rainbow and then some. She loves textures, so her work is not only pleasing to the eye, but also to the touch. 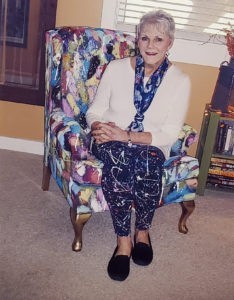 Barkley painted the trousers she is wearing and the chair on which she is sitting using the “splattering” method.

“I see everything as a possible canvas,” Barkley said. That may include bottles, clay pots, cardboard, furniture, pennies, clothes, sticks—anything she might find. Much of her art is original, but sometimes she sees something and puts her own take on it.

Barkley was born in Russellville, Ark., and grew up in Jonesboro, where her father was a dentist.

“Mother was from Dover,” she said, a place with 500-plus residents, and her father was from Cave City, the watermelon capital of Arkansas, but “a metropolis compared to Dover.”

Barkley’s major at Arkansas State University was sociology. She flew for American Airlines “way back when they were called stewardesses and not flight attendants. My first trip was on a DC-6, so does that date me?”

She also worked for her dad as a dental assistant, and after her marriage, lived in Philadelphia, Pa., where she worked in a gift shop, “which sounds like I didn’t know what I wanted to be when I grew up.”

When she was a child in the fifth grade, the family moved to Albuquerque, N.M., and she loved the culture and beauty of the West. She was happy there, but her father thought it best not to raise his family in a large city, so they returned to Arkansas.

Barkey hated the move, and she promised herself she would never live in Mississippi or Alabama—but never say never. She grew up, married, and her husband got a job as a biologist with the government in Vicksburg. He was thrilled because of the outdoor possibilities of hunting and fishing and living near the Mississippi River.

“And I thought, well, my life has ended,” Barkley recalled. 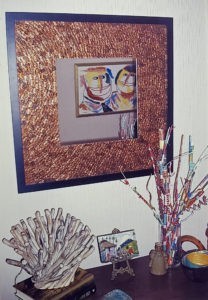 Pennies form the mat around this mirror, which shows some of Barkley’s art in the mirror and one of her twig bouquets on the table.

In reality, she had found her niche, though it didn’t happen immediately. A neighbor told her of a job in a trailer just off the interstate where she would be giving out info to tourists. She applied for the job and got it. The trailer was the home of the local Tourist Commission (now called the Vicksburg Convention and Visitors Bureau).

She worked for two different directors, and when each resigned, she applied for their job. She landed it on the third try, heading the organization in 1976.

As director of the tourism industry in Vicksburg, Barkley had a job that was more than full time, so there was no time to pursue her art interests and talents.

She will admit that she’s not the most patient person. She is anxious to get things done and often adheres to the theory, “If it doesn’t work, read the directions.” When she went house-hunting in Vicksburg, she bought the first one she saw. The real estate agent wanted to show her others, but Barkley knew, “This is it.”

She probably inherited her artistic genes from both parents, who were potters, and she painted her first canvas when she was 21. It was a primitive, a sort of folk art, and Barley’s mother proudly hung it. Visitors mistook it for a Clementine Hunter original.

Today, her home is a virtual art gallery, and among the many “objets d’art” are a few mementos of her 16 years in the tourism business. One is a large, framed display of matchbooks from her many trips to many places.

Her talent is natural, though she did take one art class: a two-day event from Doug Walton in Ruston, La., 16 years ago. 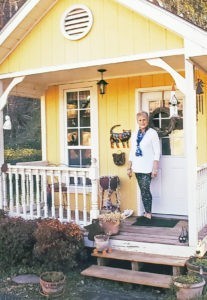 Most of Lenore Barkley’s art is created in this backyard studio.

She works from a small studio in her back yard, and the little yellow building includes a porch and a weathervane “because this is the South.”

So, what does she paint? Just about anything she sees—there is no limit.

Barkley uses pennies to create mats for picture frames, floor mats, table coverings and other whimsical items. Her cat, Merlo, likes to sleep on the penny mats because “she may have arthritis, and copper is supposed to be a healer” for the malady.

There is no limit to her subject matter either, but she does have quite a number of items featuring cats.

There is hardly a limit to what she can turn into art, but one example is twigs or short limbs from trees in her yard. She paints them, decorates them and puts them in vases. It’s a bouquet that is always in bloom and doesn’t die, and there is no limit or shortage of supplies.

If there is a puzzle and some pieces are missing, it’s of no value, right? Wrong! Barkley takes the pieces and fashions them as branches and leaves on paintings of trees.

She paints chairs—even trousers she wears—by splattering, which is painting objects with a large, floppy brush. She paints with acrylics.

“There’s no such thing as wrong art,” is her philosophy.

Some of her creations are for sale in Vicksburg at the Old Court House Museum gift shop, at Lorelei Books, The Dragonfly, Main Street Market Cafe, The Turquoise Chandelier, the Biedenharn Coca-Cola Museum and in Jackson at Latitudes.