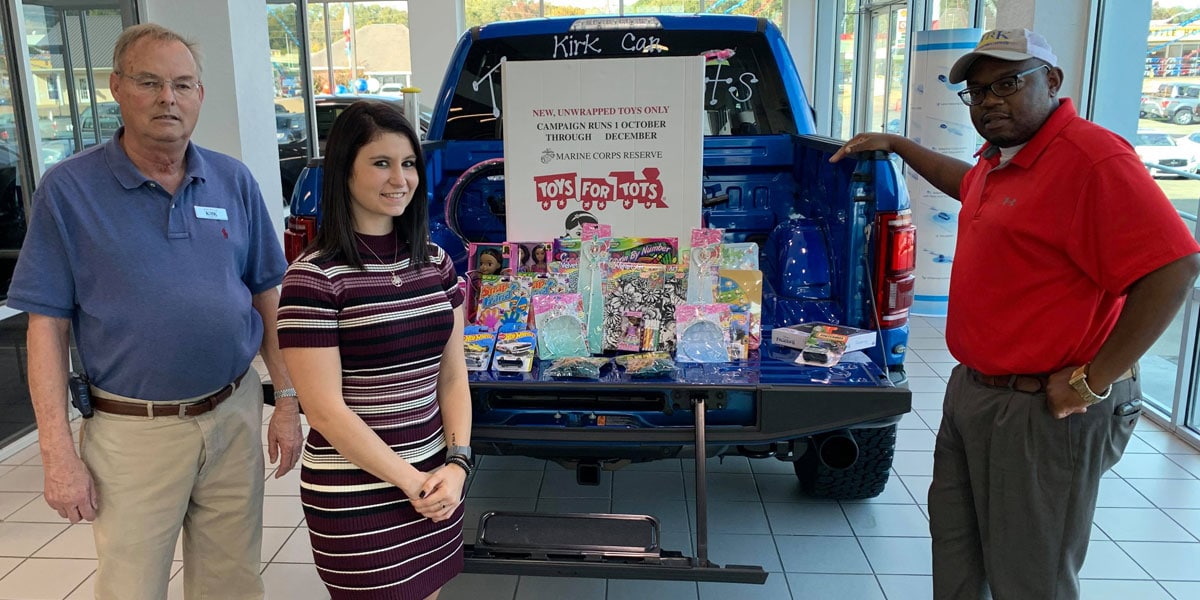 Jess Willis, Amanda Sanderson and Charles Cooper with Kirk Brothers Ford in Vicksburg hope to fill up the truck bed with toys for needy children this Christmas. (photo by Thomas Parker)

Kirk Brothers Ford in Vicksburg is an official Toys for Tots drop off location this Christmas season.

Charles Cooper with Kirk Brothers said they hope to fill a 2019 Ford Raptor pickup located inside the dealership’s showroom with new, unwrapped toys.  Then, they’d like to fill it again and again.

“This has been a difficult year for many people,” said Amanda Sanderson who works with internet sales at the dealership, “but no child should be forgotten this Christmas.”

Since its inception, the U.S. Marine Corps Reserves Toys for Tots program has donated 313 million toys to 151 million children.

It began  in 1947 when Major Bill Hendricks, USMCR, and a group of Marine Reservists in Los Angeles collected and distributed 5,000 toys to needy children. The idea came from Bill’s wife, Diane.  In the fall of 1947, Diane handcrafted a Raggedy Ann doll and asked Bill to deliver the doll to an organization, which would give it to a needy child at Christmas. When Bill determined that no agency existed, Diane told Bill that he should start one. He did.

Sanderson said that everyone who donates will be entered into a drawing for a $100 gift card.

To donate a new, unwrapped toy, stop by the dealership at 2431 North Frontage Road. It’s open from 8 a.m. until 6 p.m. Monday through Saturday.