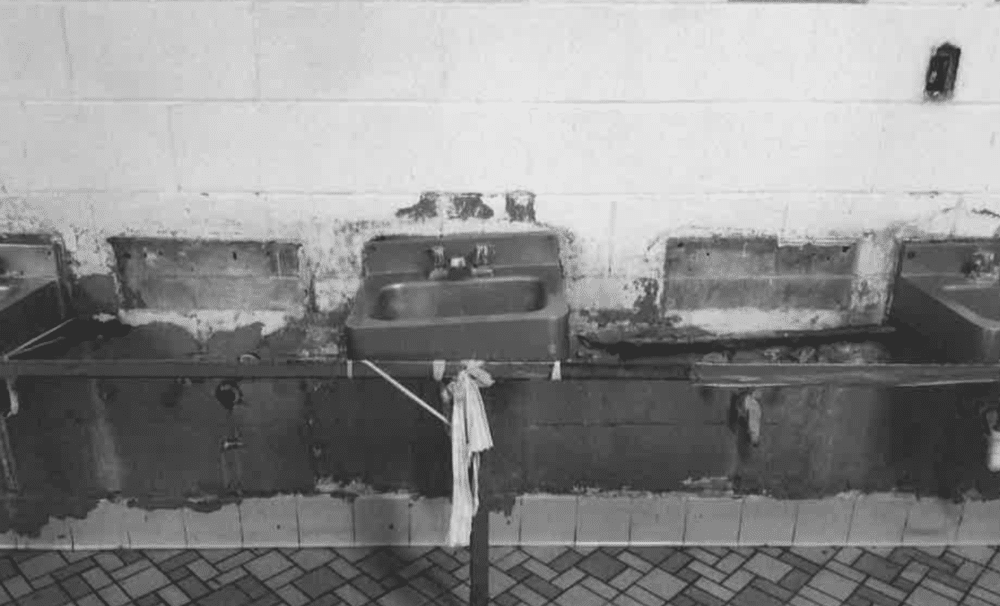 Sinks missing from a wall at Parchman Prison. (photo from the Mississippi Department of Health)

A month after deadly riots, the U.S. Department of Justice’s Civil Rights Division has announced it is launching an investigation into four Mississippi prisons.

“The investigation will focus on whether the Mississippi Department of Corrections adequately protects prisoners from physical harm at the hands of other prisoners at the four prisons, as well as whether there is adequate suicide prevention, including adequate mental health care and appropriate use of isolation, at Parchman,” according to a Wednesday news release from the Justice Department.

The Mississippi Center for Investigative Reporting and ProPublica have been investigating and reporting on these conditions for more than a year.

Over the past nine months, the State Penitentiary has seen at least 16 violent deaths, joining the ranks of some of the world’s deadliest prisons per capita. Those deaths include eight suicides and eight homicides. A ninth possible homicide is still being investigated, according to the coroner and state Crime Lab.

“This is a level of violence and lethality that we associate with prisons in countries like Brazil and Honduras, not the United States,” David Fathi, director of the ACLU National Prison Project, told the Mississippi Center for Investigative Reporting.

An investigation by the center and ProPublica revealed that Parchman has been the subject of neglect by state officials, who have known for years about these deteriorating conditions.

In August, MCIR and ProPublica reported that gangs exerted so much control at SMCI that they even determined where inmates slept and whether they had mattresses or not.

Inmates shared how gangs snapped their pictures with cellphones so that even if they were transferred to a different part of the prison, their photos would arrive ahead of him. Gangs also charged fees for the beds, wall phones, food, showers and much more.

Inside Mississippi’s prisons, inmates say they have little choice but to join a gang. “Most of the prison population are affiliated now,” one inmate told the center, “or else they’re victims.”

The news report quoted a top SMCI official as saying the gangs were running the prison, an accusation MDOC spokeswoman Grace Fisher denied.

In June, the Marshall Project reported on a December 2018 internal audit at Wilkinson County Correctional Facility, in which then-Warden Jody Bradley allegedly told gang leaders to “control their men” and if they failed to do so, he would place the entire unit on lockdown, confining all the inmates in the unit to their cells.

It attributed “the level of violence that pervades Mississippi’s prison system” to the acute understaffing of its prisons. MCIR and ProPublica reported that MDOC had 1,591 correctional officers in 2014, according to the State Personnel Board. That number had shrunk to 732 by the end of December.

The letter noted, “accounts of gang control at SMCI are particularly egregious and shocking: people report that gangs assign residents to cells and beds, overriding the formal MDOC assignments; control access to phones; photograph prisoners, using contraband cell phones, to create and maintain unofficial databases; determine when and where individuals may eat and shower; and enforce fines against those who break gang-written rules.”

She talked with House Speaker Philip Gunn about her department’s funding needs.

“I can’t go in there and ask the House to fund that kind of money in an election year,” a state official quoted Gunn as replying. “Can’t you just lock ‘em down?” 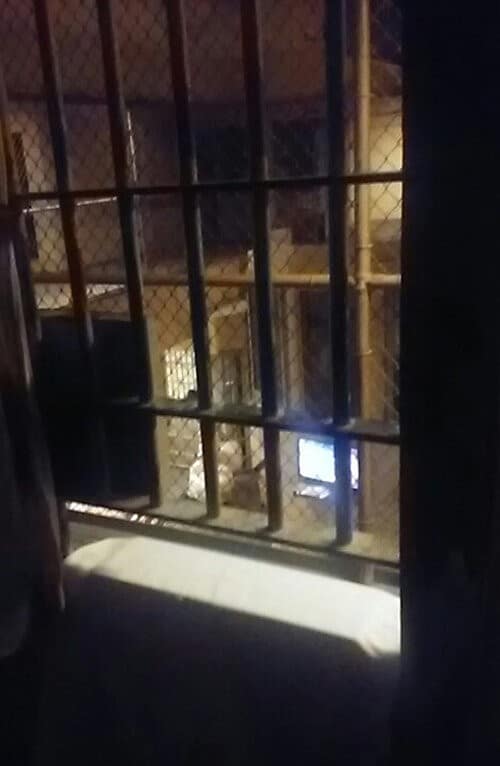 Hundreds of Parchman inmates sit in the dark because their lights don’t work. (photo from the Mississippi Department of Health)

Gunn told the Mississippi Center for Investigative Reporting that he doesn’t recall that specific conversation, but he noted that “every state agency asks for more money. Most of them are for raises.”

For fiscal 2021, MDOC officials have asked for $78 million in additional funding — nearly a third of it to renovate Unit 29, describing it as “unsafe for staff and inmates.” Nearly $50 million of that would go for pay raises for correctional officers.

The Joint Legislative Budget Committee, which sets spending priorities for the state, is recommending that representatives reject that request and cut the corrections budget by $8.3 million.

Newly inaugurated Gov. Tate Reeves is asking lawmakers to keep MDOC’s budget the same, despite past cuts, current woes and his promise that correctional officers be “compensated fairly.”

His proposed budget says “more investment” may be necessary in the future, but “we do not want to blindly request an increase to achieve a vague ambition. We want to ask for targeted investment.”

“We know that there are problems in the system,” Reeves declared at a news conference. “We don’t want to hide them. We want to fix them.”

Reeves is blaming the past administration for the woes, despite the $215 million in cuts to MDOC’s budget over the past six years that he oversaw as lieutenant governor. He said lawmakers didn’t trust the leadership and questioned how the Corrections Department was spending its money.

He has asked the Department of Finance and Administration to analyze MDOC spending to “accurately determine where taxpayers’ money is currently being spent (or misspent.)”

State officials’ immediate responses to the deadly rioting have included shuffling some inmates to a long-shuttered unit lacking running water and lights, busing others classified as maximum security to a private prison holding out-of-state prisoners from Vermont, and examining the relocation of these super-max inmates to a closed private prison originally designed to house juvenile felony offenders.

Renae Eze, spokeswoman for the governor,  said in an email to the Clarion Ledger that Reeves’ office is “grateful” for the federal investigation.

“We are grateful that President Trump’s administration has taken a focused interest in criminal justice reform and that they care enough about Mississippi to engage on this critical issue. As we continue our own investigations, we look forward to cooperating with them and working together to right this ship. We welcome them to this mission. More people working together to solve it will be better than just a few,” Eze said in the email.

Lisa Graybill, deputy legal director for the Southern Poverty Law Center, urged the Justice Department to go beyond the four prisons to conduct a “full statewide investigation because only a systemwide solution can solve Mississippi’s severe overcrowding and understaffing problem.”

Rob McDuff, impact litigation director at the Mississippi Center for Justice, said Mississippi’s prisons are so dysfunctional they endanger the public and siphon millions from the state budget.

If the state of Mississippi will stop costing the taxpayers by housing prisoners who aren’t dangerous, McDuff said, “we can begin to move toward a more sensible prison system that is safer for prisoners, for prison staff, and for the public.”

Cliff Johnson, director of the MacArthur Justice Center, said Mississippi imprisons more people than all but two states, but it has the 16th lowest violent crime rate.

Reform is needed, he said. “We must overcome our addiction to locking people up.”

Justice Department officials say those with relevant information can contact the department at 1-833-591-0288 or by email at [email protected].

This story is reprinted with permission from the author and the Mississippi Center for Investigative Reporting. Email Jerry Mitchell at [email protected] and follow him on Facebook at @JerryMitchellReporter and on Twitter at @jmitchellnews.