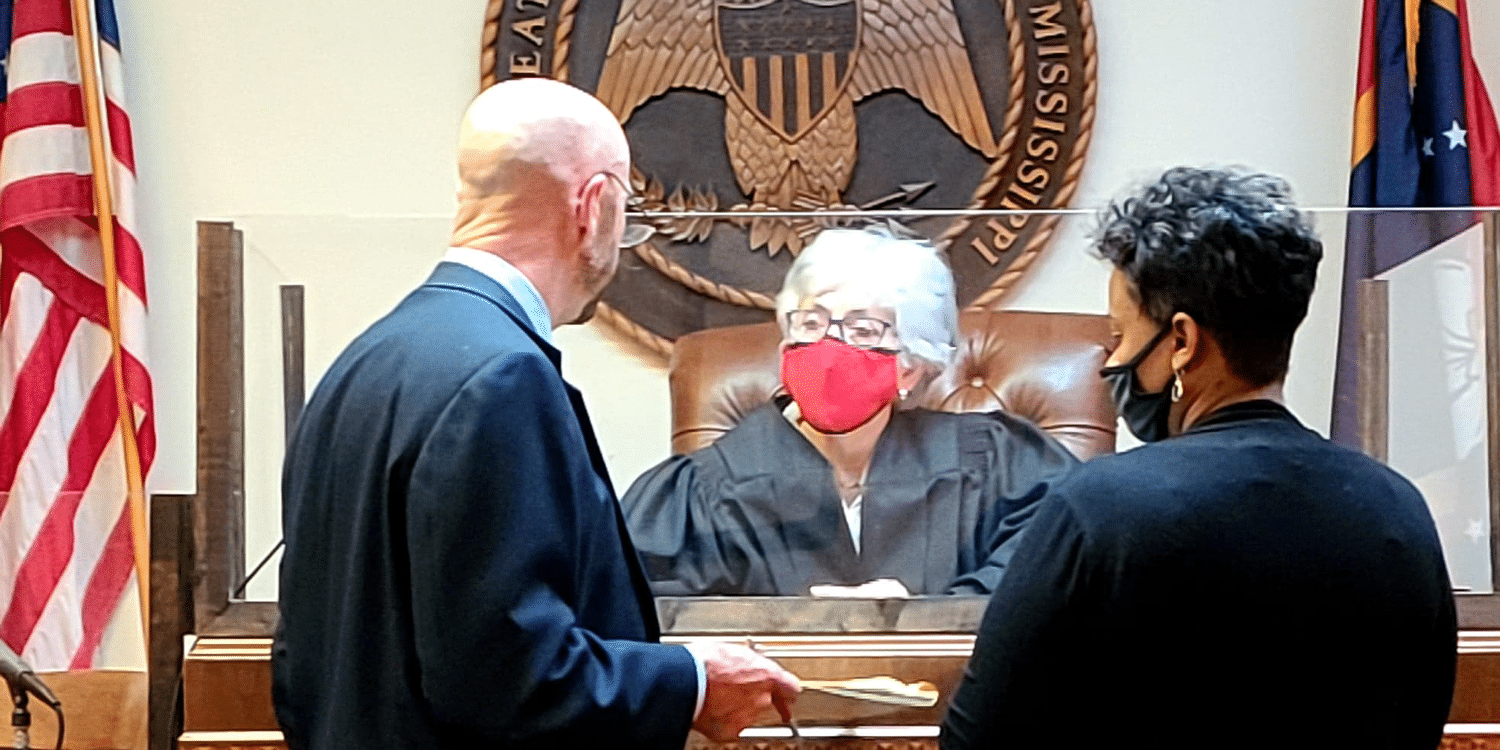 A city woman has been sentenced to 6 months in jail and a $1,000 fine, the maximum sentence allowed by law, for criminal animal neglect in a horrifying case set before Judge Marcie Southerland on Monday.

On Wednesday, March 10, Carolyn Andrews called Animal Control to have them retrieve a dog from her home. When Jeffery Fisher with Animal Control arrived he was shown Cloe, a smaller tan mixed-breed dog in a cage. Cloe had severe wounds and was putting off a putrid smell. Andrews stated Cloe had gotten her legs caught in the carpet in the cage.

“Been caught for a minute,” was Jeffery Fisher’s with animal controls immediate response.

Cloe was reportedly in a small cage. Her legs were rubbed raw and to the bone in a 2-inch area around and above the paw. Both of Cloe’s front legs had damage to her pads and the area just above the paw. The pads were all but gone, toes were missing and the legs were worn down with no fur remaining, most of the skin and muscle were rubbed away and bone was visible. The flesh was rotting.

Her right rear foot had exposed bone with no pad remaining and it was also missing toes. Fisher had Andrews sign the appropriate papers for the dog to be removed and immediately transported the animal to the Vicksburg Animal Hospital. In these papers, Andrews wrote that she had the dog for six months.

Dr. Stephanie Duhon Wallace has been with the Vicksburg Animal Hospital for 14 years and was on duty when Cloe came in. In her sworn testimony she said, “The dog stank. Made me gag.” 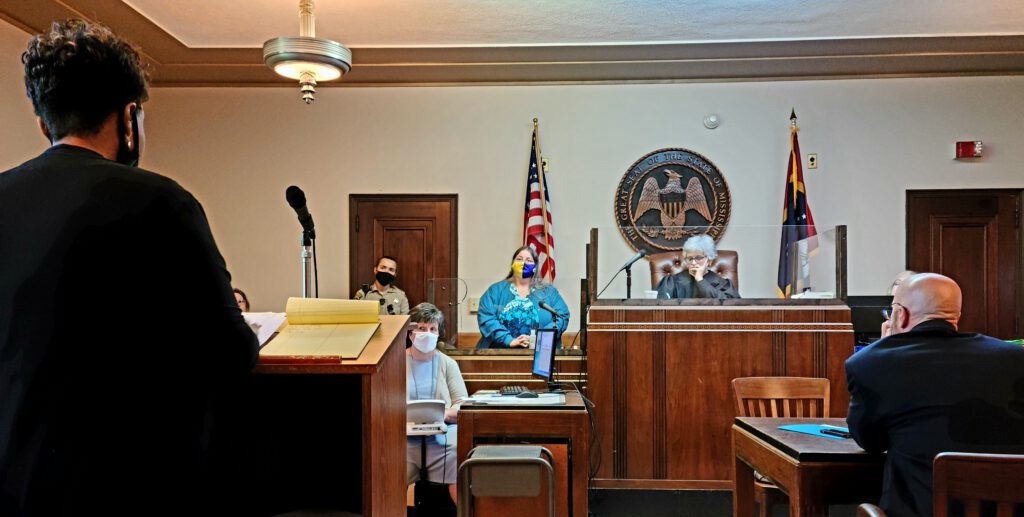 City prosecutor Kim Nailor queried Dr. Wallace about what would cause the kind of injuries present on Cloe. Dr. Wallace stated, “Something was wrapped around the dog’s legs and wore through to the bone.” Under further questioning from the Prosecutor, Dr. Wallace noted that Cloe was a candidate for euthanization but decided that since Cloe, somehow, was able to walk, that they would begin treatment. That treatment included skin graphs.

Prosecutor Nailor called Kacie Lindsey to the stand. Lindsey runs the Animal Shelter and is over the Animal Control department for the City of Vicksburg. In her sworn testimony, she stated that Andrews declared that it was her son’s dog and she was watching it for him “since he moved away.” Later testimony would clarify her son was incarcerated. Lindsey noted in her testimony that Cloe’s feet were close to rotting off. Lindsey went on to testify that when speaking with the lady the next day, the story had changed and Andrews was now claiming Cloe was taken in as a stray.

Prosecutor Nailor stated that her remaining witnesses were going to offer similar information, and due to a scheduling issue with the court, offered to rest her case early in the interest of time. That led to Defense Attorney Mike Bonner calling School Resource Officer Rodney Lehman.

Lehman testified he knows Andrews and has seen her with her other dog, a small chihuahua, on a regular basis. “She lives near where I patrol and I’ve seen her with her dog many times over six years. The dog was healthy and happy” reported Lehman. On cross-examination, Prosecutor Nailor clarified that Officer Lehman had never been in Andrew’s home and would not know if Cloe was in the house or had been in that cage in that condition.

The case was moved to the afternoon where the defense began by calling in a witness who stated they had seen Cloe running in the streets with a pack of dogs. The witness noted Cloe had a limp. However, under cross-examination, the questioning exposed inconsistencies in the witnesses’ testimony, and a couple of long pauses before answering questions called the veracity of this testimony into question. Much of what the witness testified was inconsistent with the documents allowed into evidence. 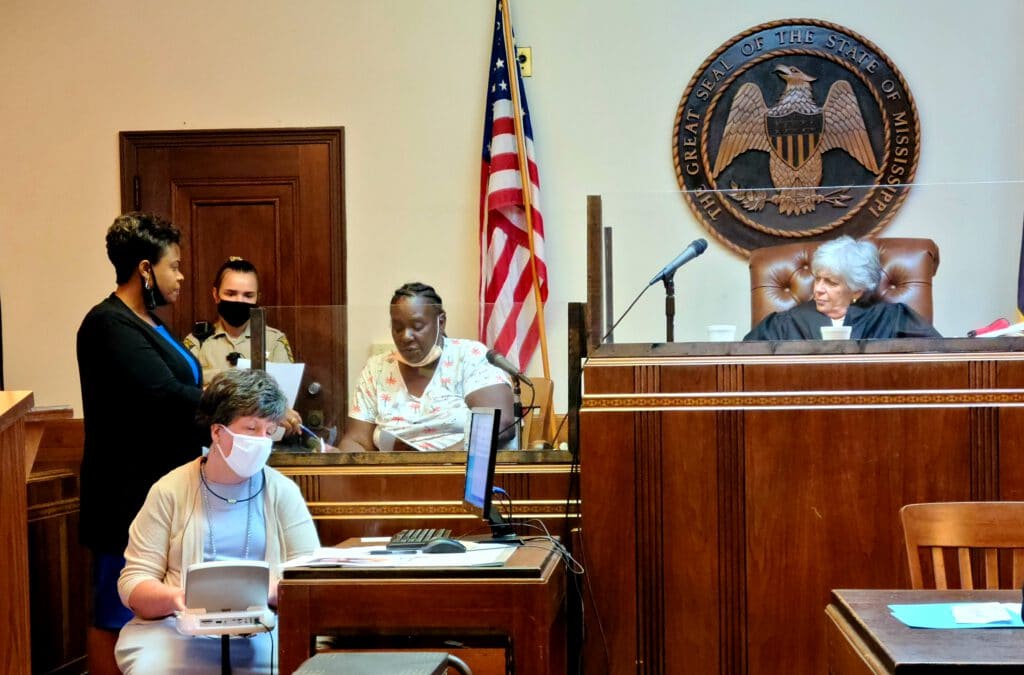 Kim Nailor cross-examines Carolyn Andrews. In the foreground is court recorder Robin Magee with Deputy Rita Freeman in the back as Judge Marcie Southerland looks on (photo by David Day).

She was advised by her attorney, Mike Bonner and Judge Marcie Southerland that she did not have to take the stand. Andrews acknowledged her rights and waived them, insisting she testifies.

She began by making sure the court heard her medical issues. She stated she was up all night the night before calling the animal shelter. She told the court how she feeds the neighborhood dogs every day. There is a pack of dogs in the area and she makes sure they eat. She feeds them leftovers and has a bag of dog food she keeps on hand for the feral creatures. She noticed the injured dog that day and had a friend get it for her so she could call the shelter and get the dog some help.

Andrews went on to say she only had the dog in the house for a few minutes prior to calling animal control.

On cross-examination, Prosecutor Nailor noted every inconsistency with Andrews’ version of events including the document written and signed by Andrews that stated she had the dog for 6 months and checking the box that asks if that was her dog.

Andrews explained she did what she had to do for animal control to get the dog some help. Andrews then explained that the dog was running in the street with its legs wrapped in carpet and she just wanted to help.

Judge Southerland began a deliberate recounting of the testimony but stopped short of a full recap of the trial to declare to Carolyn Andrews, “I just don’t believe your version.”

The Judge immediately sentenced Andrews to 6 months in jail, with 3 months suspended, a $1000 fine and Andrews must make restitution for the $1980 in medical bills. Andrews was also prohibited by the court from owning another animal for 3 years, therefore losing custody of her other dog.

Cloe is still recovering at the Vicksburg Animal Hospital and will survive thanks to the care she is receiving. Dr. Wallace, in her testimony, noted that despite the severity of her injuries, Cloe is robust and coming back strong, saying “She eats like a pig.” 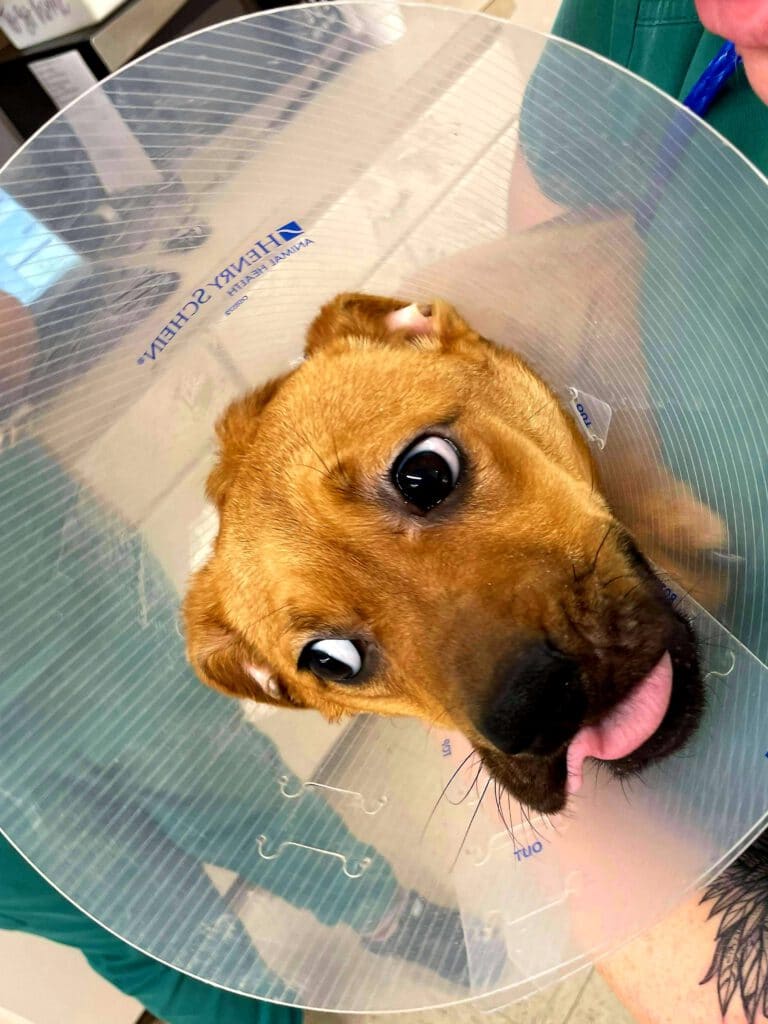 If you have an animal you can no longer take care of there is help available. Neglecting an animal or “disposing” of the animal is now a crime in the State of Mississippi. You will go to jail and it will be expensive.