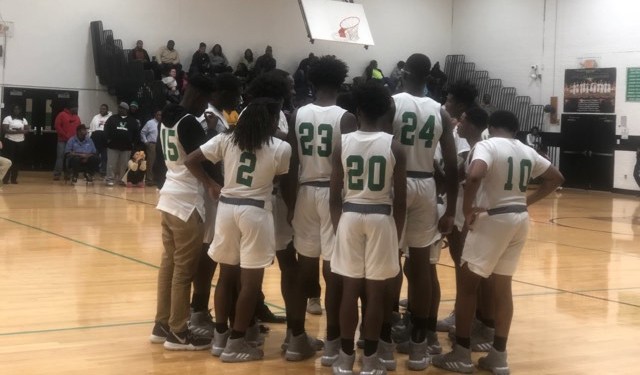 The Gators plan their next moves.

The Vicksburg Junior High Gators basketball team kicked off its regular season last night against the Brandon Bulldogs.  The Gators are led by head coach Jerdon Hardiman who is preparing his team for a little championship every year.

The game between the Gators and the Bulldogs started of slow until Vicksburg scored from a free throw to put the game at a score of 1-0. The Gators soon hit a 3-pointer and continued to play hard defense which ended the first quarter with the Gators winning 7-2.

Vicksburg would find a way to put 12 more points on the board in the second quarter to take the lead at halftime, 19-10.

As the Gators entered the locker room at halftime, coach Hardiman told the team that he needed no more missed free throws in the ball game.

Vicksburg came out hot in the second half by scoring 15 points in the third quarter. They made all of their free throws, which clearly satisfied Hardiman and assistant coach DeAndre King.

By the beginning of the fourth, Vicksburg was winning big, 34-19, but Brandon started showing off their skills by only allowing the Gators to score one point in the last quarter. Brandon gained 11 points in the fourth, but it was not enough to defeat the Gators, who won 35-30.

“I felt like we were fatigued in the last quarter,” Hardiman said.

“Every game will be a battle,” he added as he walked his team into the locker room to celebrate the victory, “but we just have to work through it and keep pushing.”