There was no doubt about it. They were souvenir salt and pepper shakers.]]]]> ]]> 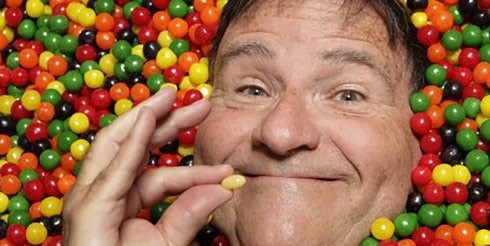 David Klein, aka the Candyman, is giving away a candy factory

Lovers of puzzles and jellybeans have a chance to win their very own candy factory.

David Klein, affectionately known as The Candyman, is excited to announce a worldwide treasure hunt. Klein, the founder of The Jelly Belly jellybeans and Tricky Treasures, is getting ready to retire, but not before he has some fun and not before he gives back to everyone who loves the candy industry like he does.

David and his partner have started going across the U.S. hiding gold tickets in the form of necklaces in places they come across with an interesting story. Plans are to have multiple treasure hunts for these gold tickets in each state. You can join one of their treasure hunts which are launching right now at www.TheGoldTicket.com.

The biggest and best part of these treasure hunts is that anyone who joins at least one treasure hunt, will be eligible to search for The Ultimate Treasure: the key to one of his candy factories and an all-expense paid trip and education to a candy-making university. He will add this treasure hunt after all the states have had a chance to play. Each treasure hunt is valued at $5,000 and cost is only $49.99 to enter a hunt. Each treasure hunt has a strict limit of 1,000 participants, no exceptions.

“With The Gold Ticket Treasure hunt, our goal is to get people out and about with their families. Grandma and Grandpa can even join with the kids and grandkids,” Klein said in a release. “Take videos of your treasure hunt experiences for possible inclusion in our upcoming series.”

Please go to www.TheGoldTicket.com and watch David’s documentary, “Candyman The David Klein Story,” for free and be inspired. Also, join the Facebook page for more information. The Gold Ticket Treasure Hunt would be a GREAT gift this holiday season. Join David on this Willy Wonka® fantastical journey across America and see if you can find one of his elusive gold tickets.

Share your opinion! Below are ten options for the new Mississippi state flag. Nine are contenders to be chosen by the Mississippi Legislature in Sept, and one is just a staff favorite here at Vicksburg Daily News. Let us know what you think!

Booze Fairies are ‘dusting’ Vicksburg with the joy of giving

In a time when most of us could use some good news and something to make us smile, a group on Facebook is doing just that.

Booze Fairies of Vicksburg is made up of women in the area who just want to make someone’s day a little better.

Women who sign up in the private group make a short list of the kinds of little things that would make them happy—a favorite cocktail, snack, or other little tidbits. Other women in the group can choose one or more people to make happy, whether it’s women they know or random strangers in their neighborhood. The women put together baskets or boxes with goodies and deliver them to other members. How much to spend is completely up to the giver, who can remain anonymous or not.

Think of it like a big game of Secret Santa, only for the times of COVID-19.

“There are no rules,” said member Heather Williams. “just go make somebody happy.”

Williams, who taught elementary school at the Sherman Avenue School for 25 years, said she’s delivered four baskets so far, two to women she knows and two others to strangers. Everything she bought was from the Dollar Tree store. She just made sure it was fun.

She used glittery party hats for her baskets, then added balloons, a pair of sunglasses, candy and crackers. Just little things, she said.

“It’s nice to get them,” she said, “and actually, it’s fun to go deliver, too. … You wouldn’t believe how much fun that is.”

After women get “dusted” or “boozed,” they will put up a photo of their goodies on the group page.

“You get to show it off,” Williams said. “It’s just neat. I thought it was a great idea.”

“I’m just sick of people being ugly to each other,” she said, and this makes her feel good and makes the recipients feel good. It’s a win-win.

Williams has also received a basket with Margarita mix, Funyons, gum, Skittles, a pretty little magnet and a candle.

“I was having a rough day, and I got home and there it was,” she said. “It made me feel better.”

Booze Fairies of Vicksburg was started by Whitney Porter and has nearly 3,000 members.