'It was just kind of normal.' A Vicksburg family struggles with opioid addiction 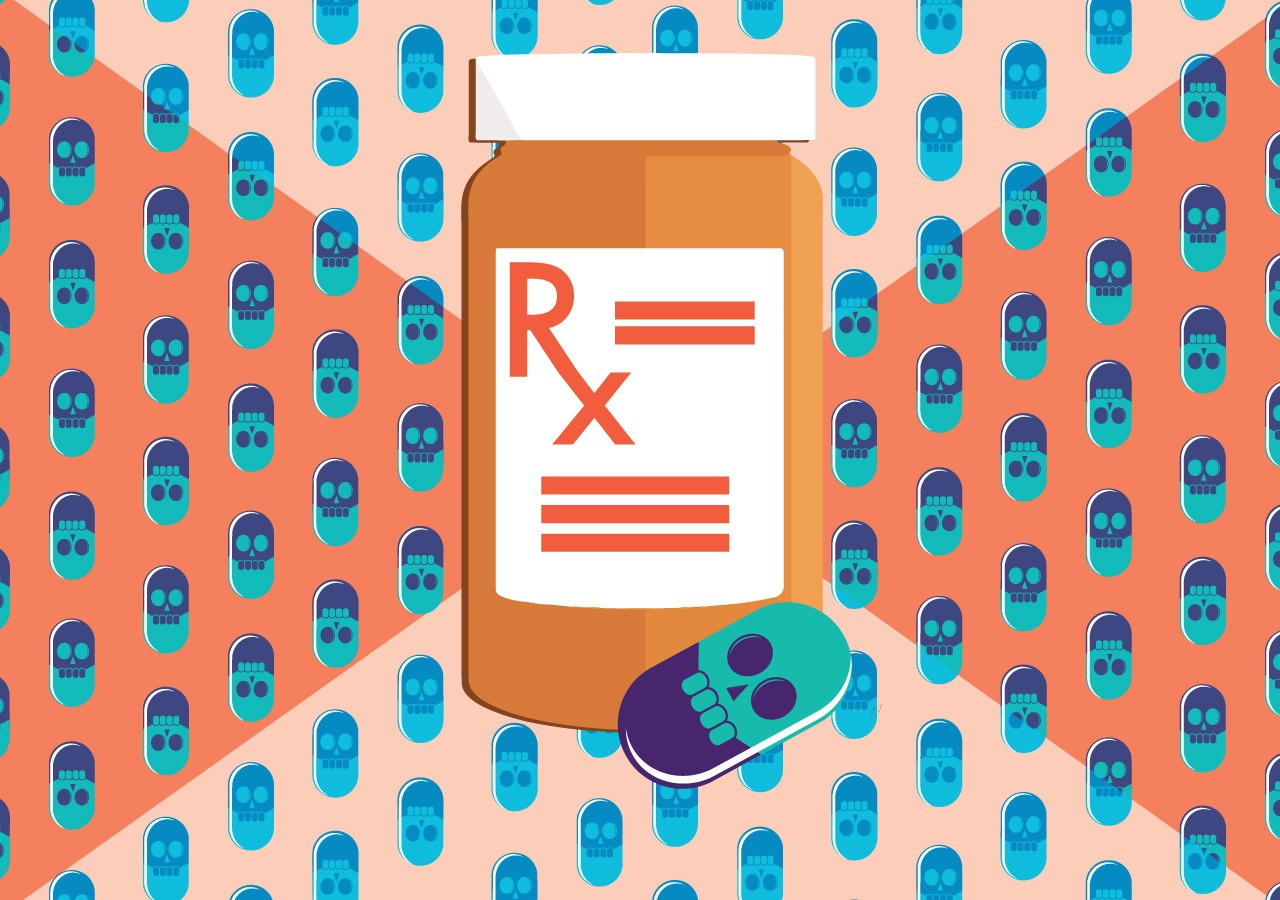 Graphic by Drew Landon Harris for the Vicksburg Daily News. All rights reserved.

“I was a good mother,” Vicksburg resident Jane Collins said with just a hint of defensiveness in her voice. “When he was little, they would put him on opioid cough medicines.”

Throughout his life, Jane saw doctors prescribe narcotics to her son multiple times. As he was growing up, Tommy played sports at school, and he received opioid prescriptions for his injuries, even for a concussion. Once, he developed an MRSA infection, and doctors gave him powerful pain medication for that, too.

MRSA, or Methicillin-resistant Staphylococcus aureus, is a drug-resistant staph infection that generally starts as painful red bumps on the skin, but can spread to bones, joints, the bloodstream and vital organs including the heart and lungs. It can be life threatening.

This was decades before the problems of prescription opioids became nationwide news. Tommy was a 1980s baby, and the prescriptions didn’t worry her—at first.

“It was just kind of normal,” she said.

Jane now knows that Tommy became addicted to those prescription pain pills. “When the prescriptions ran out, he started buying them off the street,” she said. “I didn’t know this at the time, of course.”

The crisis gets nationwide attention

In October 2017, President Donald Trump declared the crisis a public health emergency, a designation that allowed for research in federal agencies, but didn’t provide access to emergency federal funding to the states.

“As Americans, we cannot allow this to continue,” Trump said at the time. “It is time to liberate our communities from the scourge. We can be the generation that ends the opioid epidemic.”

Critics say the president hasn’t done nearly enough. Many states don’t have the resources to take on the nationwide problem. At the time, the federal public emergency fund only held about $57,000, leaving many wondering where the money would come from to tackle a problem that could cost the nation tens of billions of dollars. Last year, Congress approved $3 billion a year to help states fight the scourge.

Mississippi ranks fifth in the nation for per capita opioid prescriptions, with more than 183 million dosage units dispensed in 2017, according to Stand Up Mississippi, an organization working to fight the crisis in the state. (A dosage unit is the number of pills prescribed per use. If a doctor says to take two pills three times a day, the dosage unit is two pills.)

That amounts to enough pills to provide roughly 50 dosage units to every man, woman, and child in the state.

The Centers for Disease Control says that in 2017, Mississippi providers wrote 92.9 opioid prescriptions for every 100 persons, compared to the average U.S. rate of 58.7 prescriptions.

Pharmaceutical companies on the hook

Beginning in the 1990s, pharmaceutical companies began aggressively marketing a new type of medication to doctors as being an effective, non-addictive solution for pain. Today, it’s widely known that the drugs—opioids—are extremely addictive. But it took hundreds of thousands of deaths and 2 million addicted patients to get the public’s attention. Today, there are some 2,000 lawsuits filed against companies such as Purdue Pharma, which manufactures OxyContin.

Earlier this year, California Attorney General Xavier Becerra accused Purdue and its former president, Richard Sackler, of helping to fuel a nationwide crisis by marketing OxyContin as safe despite knowing it is one of the most abused opioids in the country.

“Purdue Pharma and Dr. Sackler started the fire and then poured gasoline on the opioid crisis with practices that were irresponsible, unconscionable and unlawful,” Becerra said in a statement.

Doctors, always looking for ways to help patients in severe pain, heavily prescribed the drugs, unaware they were setting many patients up for a lifetime of addiction.

“If they say, ‘This is OK,’ you think the doctor is aware,” Jane said. “They were being lied to by the pharma companies. They did not have accurate information.”

Unlike some addicts, Tommy Collins never graduated from pills to other illicit forms of the drugs. “He never, ever used heroin,” Jane said. The reality is that it didn’t matter, because street drugs of any kind can be lethal.

When he was about 20, Tommy moved away from Vicksburg, eventually ending up in Iowa. Jane knows that her son unsuccessfully attempted to break his habit several times. “He tried to stop and kept trying to stop,” she said, but each time he would find a new supplier and the cycle repeated. 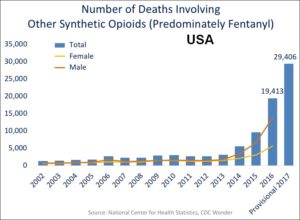 In early 2015, an Iowa coroner examined Tommy’s lifeless body and told Jane and her husband, Max, that the cause of his death wasn’t clear.

“At the time of death, they said, ‘We don’t see anything wrong,’” Jane said. It would be another five or six months before they learned the truth.

“He had 10 times the lethal dose of fentanyl,” in his system, she said. Whoever sold him that last batch of pills had spiked them. Or maybe Tommy thought he could handle the new synthetic opioid that is 50 times stronger than pure heroin.

Jane immediately did what she could to help find the people responsible for Tommy’s death.

“I downloaded all the texts from his phone,” she said. “Grabbed them all and sent them to Iowa after we got the autopsy.” It was a futile attempt. The numbers Tommy had called weren’t in service or had been changed.

Tommy’s case is officially cold, now, but the Collins family’s opioid trials are far from over.

About 10 years ago, Tommy’s dad, Max, cut his leg while on the job. Like his son, Max developed a MRSA infection, and doctors prescribed opioids for the pain. As the infection worsened, so did Max’s pain. It spread, eventually requiring surgery—and even more opioids.

Doctors prescribed Lorcet and later Norco, both versions of the same drug combination: hydrocodone, the opioid, and acetaminophen, a non-opiate pain reliever commonly known as Tylenol.

Max also tried to get off the pills, Jane said, but the pain would get even worse. “debilitating,” she called it. Max would become agitated and angry as the opioids wore off and the pain increased. Sometimes he was suicidal. Eventually, doctors would put him back on the pills.

Photo from the National Institutes of Health

Research shows that using opioids, whether prescription pills or street heroin, changes the way the brain works. Opioids feed the brain’s pleasure centers, giving users a feeling of relief or euphoria. As users take more and more of the drugs, the brain’s natural ability to feel pleasure is dampened, eventually making it impossible for an addict to find pleasure in anything but more drugs.

Many clinicians also believe opioids can hurt more than they help when it comes to treating pain.

In a 2016 study published in the Proceedings of the National Academy of Science, Dr. Peter Grace of the University of Colorado at Boulder found that chronic pain worsened for rats treated with morphine (another form of opioid) after just five days of treatment. The effect persisted for several months.

“We are showing for the first time that even brief exposure to opioids can have long-term negative effects on pain,” Grace wrote. “We found the treatment was contributing to the problem.”

The phenomena Grace described is called opioid induced hyperalgesia, or OIH, described as a heightened sensitivity to pain because of opioid use. It’s a paradox first noticed in 1870: Morphine tended to “encourage the very pain it pretends to relieve.”

Researchers are still attempting to distinguish the phenomenon from the brain’s increasing tolerance for opioids, reducing their effectiveness the longer they’re used. As the drugs become less effective in relieving pain, doctors increase dosages. That works for a short time, then the dosage has to be increased again. It’s a never-ending spiral with no end in sight. If, however, increased pain is due to OIH, higher doses only serve to worsen the pain.

“Max ended up on disability,” Jane said, adding, “He still has pain, but it’s not as severe as when he was off them.”

Jane worries for her husband, though. “You get tolerant of the dose level,” she said, and right now, there aren’t any effective substitutes. “At this point, we know of no other options.”

She’s seen changes in Max’s demeanor, but it’s hard to pinpoint what caused them. “The problem is that he’s also in constant pain. … Just that is going to change your personality,” she said. “He’s much more unpleasant to be around. He’s short-tempered, doesn’t think as clearly, gets angry more easily, is more forgetful.”

Max is bound to reach a point where the pills no longer help. “I know that this dosage will not be adequate,” Jane said. “Then what is he going to do?”

Jane takes cold comfort in the fact that pharmaceutical companies are finally being held to account for the role they’ve played in addicting and killing millions of Americans.

Jane Collins has become something of an expert on opioid addiction, now referred to as Opioid Use Disorder, or OUD by the medical community. In addition to her husband and her son, she’s seen close friends struggle. One is afflicted with rheumatoid arthritis; another suffered the results of a botched surgery. “It’s a tragedy,” she said.

At the height of the prescription drug crises, hospital rooms often had charts in them with cartoon faces representing a spectrum of pain, from a smiley face for no pain at all to a weeping face depicting excruciating pain. Nurses would mark which face represented their patient’s pain that day.

“The goal was to have nothing but the smiley face. That’s not reasonable,” Jane said. “That’s not sensible.” Doctors can’t stop every pain, she indicated, nor should they. Pain is a sign, and not all pain is physical.

Law enforcement, the courts and lawmakers all have a role to play as well. Drug users aren’t criminals, Jane said. To the contrary, OUD is an illness, and the addiction crises should be recognized and dealt with as a national public health emergency.

“Our drug courts need to understand that they can’t just tell someone addicted, ‘Stop.’ They need medical attention and care,” she said.

Legislators looking at allocating funds toward ending the crisis must keep in mind that prevention is just as important as treatment.

Each of us has a part in the drama, too. “Be aware of what’s being prescribed to the people you love,” Jane said. “Say ‘no’ to doctors” prescribing opioids. “That’s a starting point.”

This story is the first of an ongoing series about the opioid drug crises in Mississippi, focusing on the people of Vicksburg and Warren County.

*At their request, we have changed the names and some personal details to protect the privacy of the family featured in this story.