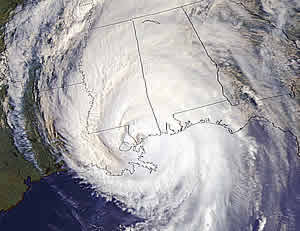 Katrina was my first hurricane. Up to that point, we had seen them on television and saw the pictures afterward.  TV and photos do not tell how it felt.
The day Hurricane Katrina hit us in Vicksburg we closed early, about 4 pm.  We decided to drop off an employee rather than wait for her family to come get her.  She was right on our way home and it saved her family having to get out in the rain and wind that had been blowing for a day or so. It was blowing a bit more as the day progressed. Little did we know it may have saved their lives as well. When we turned down the rural gravel road to her house a large tree slowly leaned into the ground. It didn’t fall with a thud or big crash, it just, well, it leaned into the ground. Hollywood had set up explosive expectations in my mind.  Seeing that tree lean on over was a letdown.
The waitress we’d given a lift decided to walk the rest of the way to her house.  It wasn’t far, maybe a block.  Normally I would refuse because of the danger of another tree falling, but this girl was tough.  I called her Ellie Mae.  She talked like, walked like, messed with critters like and looked somewhat like Ellie Mae.  I thought it was a brilliant name for her and took pride in my skill in linking her to a well-known person from just down the road a bit.  She, on the other hand, eventually threatened to beat me if I used that name on her again.  Long before she wanted to beat me I didn’t have a problem with Ellie Mae walking around that tree to her house.
There was a lot of wind, a lot of rain but we had power all night at the house and I slept like a baby. That next morning the wind and rain were still howling with a bit more confidence as the main part of the storm came towards us. I decided to drive up to the store and check on things, maybe even open up if we could. We had only been open a few months and every penny counted. The store was fine and I started a pot of coffee and fired up some equipment. There were a lot of people out and about.
We opened at the normal time, had a really busy lunch and decided to stay late because of the large number of people out. It was a really good day. Around 4 in the afternoon the power went out all around us.
But we still had power.
Don’t ask me how. We had the corner storefront in a strip mall. We were at the northern tip of the strip. The power lines had to pass all the stores to the south to get to us, four of them to be exact.  All the other stores south of us had no power, the stores at a ninety-degree angle to the west of us also had no power. The road sign had no power. Just us, HorseFace Harry’s Cafe (named after my wife) in the corner spot, had power.
We had a lot of fun with the name HorseFace Harry’s Cafe.  On the day they put up the business sign on the building, an older, white, dipped in Baptist looking guy with Dapper Dan hair came up, saw the dangling ‘HorseFace Harry’s Cafe’ sign and said ‘you must be Harry’.  ‘I said no, I am married to Harry.’
It took me a minute to understand his mean glances as he quickly walked away.
My wife is one of the most beautiful women on the planet.  It’s not just me that thinks that.  If you’ve seen her then you know it to be true.  If you knew her back then, then you really understand.  The name, Horse Face Harry, was given to her by her Dad.  When she was a little girl she wore a cowgirl outfit all the time with red leather boots, tassels, authentic cowgirl vest and two six shooter guns on her hips.  She was all girl, all Texas.  While they were out one day her Dad called her Horse Face Harry and, well, it just kind of stuck.
Meanwhile, back at her aptly named cafe we alone had power.  The street lights were out, the stop lights were out. That night we looked like a beacon in the vast sea of darkness split by lightning with haunting, howling winds.  Katrina was bearing down on us and although she was over 100 or so miles inland she was still a Category One hurricane.
The house had lost power and we made the decision to spend the night at the store with some air mattresses and air conditioning. I managed a small 8 inch TV with rabbit ears and we hunkered down for the night. When sunrise hit we had already been up for a couple of hours because of the number of law enforcement checking on us. It seems every few minutes a police car, or sheriff’s deputy was shining their light on us. We decided to make coffee and ended up feeding several dozen officers who had not had a bite to eat or a moments rest for the better part of the day.
We made a lot of friends in law enforcement that night.

It was one of the first times in my life I saw their dedication first hand in a difficult situation and felt connected to it, and them.  The vision of the older sheriff’s deputy sitting perfectly still, fork in one hand and eye’s closed hard as he caught a few involuntary minutes of shut eye.  Those men and women of law enforcement earned their pay that day.  Since that day we’ve included taking care of law enforcement as a matter of course.

By noon or so the skies were showing signs of clearing and every square inch of the city was covered in leaves.  They have blown off the trees and stuck to the wet roadway, walkway and any way they could.  It was something I had never seen before.  And although it represented the destructive force of that hurricane, it was calming.  I remember telling my sister a couple of years later that is was like the aftermath of a tornado, but for a hundred miles.  There were few people out so we decided to drive the neighborhood and look for whatever we could see.  Law enforcement had mentioned their biggest fear was a senior trapped in their house.  The senior would signal with a towel in the window or something of that nature.  As we drove the immediate area it was hard to tell where the road ended and curbs or other roads began.  We passed slowly and after seeing many cars off the road and a couple of looks from those officers we had fed not that long ago, we decided to head back to the store.

Mid afternoon had people everywhere.  Emergency crews, people with chainsaws, the military and refugees from the coast.  The day after the hurricane we saw the most people we’ve ever seen in Vicksburg.  Since we were about the only place in town that still had power we were full of people.  Almost no one ate.  They wanted hot coffee and to watch that little eight-inch television with rabbit ears.  Watching the many refugee’s reactions as they saw the first news reports of their home town was heart breaking.  Seeing grown men tear up and women gasp as they realized the devastation and that their town was gone.   I quit watching them after a while instead shifting to giving out a lot of hugs and reassuring shoulder squeezes.
Watching the storm is almost fun.  Seeing the after math and the impact of the storm on the people was something I never want to experience again.  Feeling their pain was easy.

As the radio stations came back on the air they spent all their time reporting critical information.  Shelter locations, water locations, how to get in contact with loved ones and there was one restaurant in town that was open.  We stayed open all day and all night.  We fed everyone that we could and gave away every bit of ice we had in the house.  In retrospect, we should have saved that ice for the diabetics who needed it the most.

There were stories on the radio and television starting to come in about how horrific the situation was on the coast and specifically in New Orleans.  The most haunting video for me was the elderly black woman whose husband had died on their trek away from the flood waters.  There she was on the side of the interstate with a blanket covering the remains of the man she had been with since she was a teenager.  Bewildered doesn’t begin to describe the pain in her eyes.  The news crew gave her water and moved on.

She was hunched a bit, was cold from the pounding rain and she was all alone.
That’s how it was the first few days on the coast after the hurricane.  Cold, wet, gray and you were frail and all alone.

In Vicksburg the number of people on the street helping each other intensified.  It seems the efforts were all about making sure everyone you knew was okay and had what they needed to survive.  We did survive.

Vicksburg always seems to come together in desperate situations.  Those problems in New Orleans or the politics in Washington, DC or the strife in Chicago don’t seem to stay long in our little town.  Over the 12 years or so since Katrina we’ve come a long way as a community.  We still could go a bit farther.  But one constant remains.  When the going gets tough, Vicksburg gets going.

How we managed to get power that four other businesses should have had before us still baffles me.  When I asked the Entergy guys to explain it they shrugged and asked where we went to church.
Related Topics:City of VicksburgcommunityHurricane HarveyHurricane Katrinamiraclesvicksburg
Up Next