Hurricane Sally, still a Category 1 storm, is continuing its slow 2-mph progression toward the Gulf Coast; however, the projected track of the storm has shifted to the east once again.

At 4 p.m., Sally’s center was about 85 miles south of Mobile, Alabama, with maximum sustained winds of 80 mph. 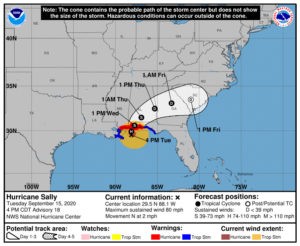 Landfall is still predicted for late Tuesday or early Wednesday. The worst effects of the storm are expected in Alabama and the Florida Panhandle, but that doesn’t eliminate storm surge of 2 to 5 feet and “historic life-threatening” flash flooding on the Mississippi Gulf Coast.