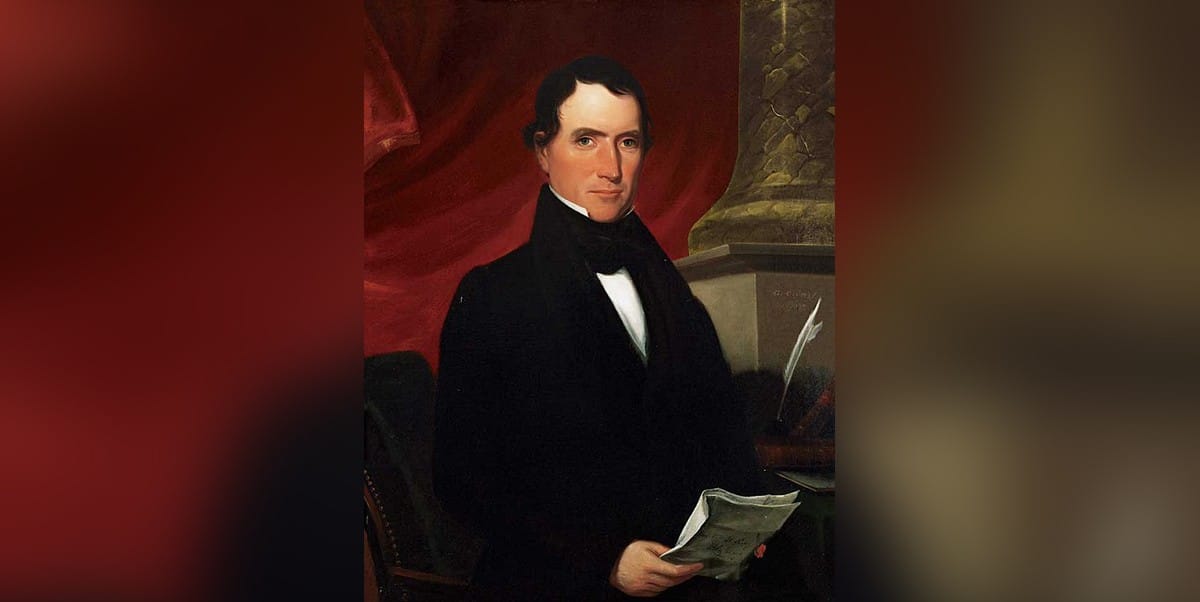 “William Rufus King” was my answer.

Some friends and I were swapping stories about the vice presidents of the United States. I was asked what vice president did the very least while in office.

In the early days of the republic, the person who got the most votes was president and the runner-up was vice president. That was changed after Jefferson defeated Aaron Burr by one vote. If things had remained the same, can you imagine how long Donald Trump’s first term in office would have been with Hillary Clinton as his vice president? 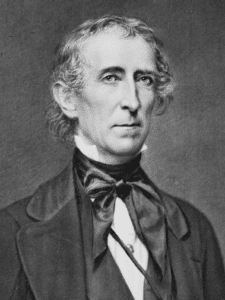 John Tyler, the first vice president to take the office of president after a president’s death, was often called “His Accidency.” (Image in the public domain)

The first vice president to take over as president upon the death of the president was John Tyler when William Henry “Tippacanoe” Harrison died after one month in office. That was in 1841. Some tried to keep Tyler from office, but he prevailed though his opponents called him “His Accidency.”

Today a lot of back-room maneuvering takes place trying to balance the ticket. That wasn’t the case in 1840 — Harrison and Tyler were neighbors in Virginia.

Tyler hardly left his mark on history, his greatest accomplishment being the admission of Texas to the Union — and James K. Polk tried to lay claim to that.

An interesting tidbit is that the Tyler descendants (there are many as John had 14 children) still live in the family home.

When Mlllard Fillmore took over as president upon the death of Zachary Taylor, it was said that he looked presidential, but looks aren’t everything. I’ve read that he installed the first bathtub in the White House. Before that, what did one do? Maybe a bird bath?

By the way, the man he replaced, Zachary Taylor, was living in Jefferson County below Rodney when he was elected. His wife Margaret opposed his running for president. She said it would kill him.

Hannibal Hamlin from Maine lost his chance to be president when Lincoln decided to replace him as vice president during the Civil War, choosing in his place Andrew Johnson of Tennessee who hated the Southern aristocracy, as he had grown up a sho-nuff red neck. Incidentally, do you know who was our youngest vice president?

It was John C. Breckinridge of Kentucky, who served under Buchannan and ran against Lincoln. He was 36 at the time of his inauguration. Breckinridge was later a Confederate general and was among those who watched the ironclad Arkansas from the top of the Old Court House as it took on the Union fleet in 1862.

Chester Alan Arthur took over the presidential office in 1881 when James A. Garfield was assassinated. Under his leadership, a lot of civil service legislation was passed. He has been forgotten, but he wasn’t a bad president. At least he didn’t disgrace us.

Theodore Roosevelt became president in 1901 after the assassination of William McKinley. It is rumored that Roosevelt was made vice president to get him out of office in New York, that as VP he could do no harm and would be forgotten. Wrong! After being elected president in his own right, there was a story that he had a new chandelier installed in the vice president’s office, commenting that when the wind blew it would cause the prisms to clink, thus keeping the vice president awake.

When Roosevelt ran again on a third-party ticket —called the Bull Moose because he said that was how mad he was — his running mate was John Milliken Parker who grew up in Port Gibson, served the Confederacy, moved to Louisiana where he was elected governor — and was Mary Lincoln’s first cousin: 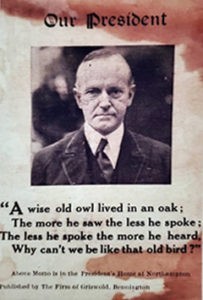 Next to ascend to the presidency because of the death of the president was Calvin Coolidge, often called “silent Cal” as he spoke but little. His predecessor was Warren G. Harding. About all I know about him was a comment made by my favorite history professor, Dr. Martha Bigelow at Mississippi College. When a student asked her what Harding died of she replied, “A stroke — a stroke of good luck for the country.”

One of Coolidge’s friends was Will Rogers, America’s great humorist. On one occasion while visiting the president, he advised him that he had just come from the office of the vice president “and he inquired as to your health.” There’s also the story of when Coolidge’s friends from back home in Vermont were invited to dinner at the White House. They were not sure of proper protocol, so they decided to do what the president did. When Coolidge took his coffee cup and set it aside, then poured his cream into the saucer, they did the same. Then Coolidge placed the saucer on the floor and called the cat.

My favorite Coolidge story is the one where he came home from church, Grace asked him where he had been.

“What did the preacher preach about?”

“What did he say about it?”

Franklin Roosevelt had several vice presidents. One was John Nance Garner from Texas who undiplomatically announced the arrival of the King of England to address Congress with “The British are coming!”

Garner was replaced by Henry Agad Wallace of Iowa, so left wing that he was replaced in 1945 by a Southern senator, Harry S. Truman. Truman had little formal education — he never went to college — but he was endowed with good common sense and made some tough decisions. He’s ranked as one of our strongest presidents.

How Southern was he? He was a member of the Sons of Confederate Veterans, and Mrs. Truman was in the United Daughters of the Confederacy.

Henry Agad Wallace was forgotten, though he did run for president on the Progressive Party ticket in 1948. I was just a lad, but I remember him making a speech at Mount Beulah in Edwards. He drove his own campaign car — an old DeSoto. That same year, Fielding Wright of Rolling Fork ran for vice president on a third-party ticket called the Dixiecrats. Wright was Mississippi’s governor.

Lyndon Johnson, called “Landslide Lyndon” because of a questionable victory in a Texas election, became president when John F. Kennedy was murdered. Lyndon’s legacy is probably the passage of the 1964 Civil Rights Act. He later became president in his own right, and my father thought his vice president, Hubert Horatio Humphrey, was his life insurance policy.

When Richard Nixon resigned as president, the vice president who took over was Gerald Ford, but that wasn’t his birth name — he was born Melvin King. Later his stepfather, Mr. Ford, adopted him. That brings to mind that Billy Jeff Clinton was really a Blythe. As a teenager, he chose his third stepfather’s name — Clinton.

There have been a lot of other vice presidents, and many having been forgotten. Case in point: Schuler Colfax.

In my lifetime, there have been two women who had the nomination for vice president from their parties: Geraldine Ferraro for the Democrats and Sarah Palin for the Republicans. If the left-wing press hadn’t attacked her politically, there is no doubt Palin would have been the best looking vice president in history.

There’s another story about a vice president I particularly love. A few years ago, while watching “Jeopardy,” there was a question I could answer (that I admit is rare) but none of the contestants could: Who was vice president of the Confederate States?

The answer is Alexander Hamilton Stephens of Crawfordville, Georgia.

Stephens was a brilliant man and small in stature at 5-feet-7-inches. He served in both the Senate and Congress for the U.S., and after the war went back to Congress for the U.S. One day a Northern senator said of Stephens something to the effect of, “You little shrimp. I could swallow you whole,” to which Stephens replied, “If you do, Sir, you will have more brains in your belly than you have in your head.”

Who was the president who didn’t have a vice president? It was Franklin Pierce whose vice president was to have been William Rufus King of Selma, Alabama. King was very ill and went to Cuba for his health. There, he was inaugurated vice president by special dispensation from Congress. He recovered enough to come back home to Alabama where he died the next day.

And that’s why he’s my nomination for the vice president who did the least.

Those who keep us safe: Edward Pritchard