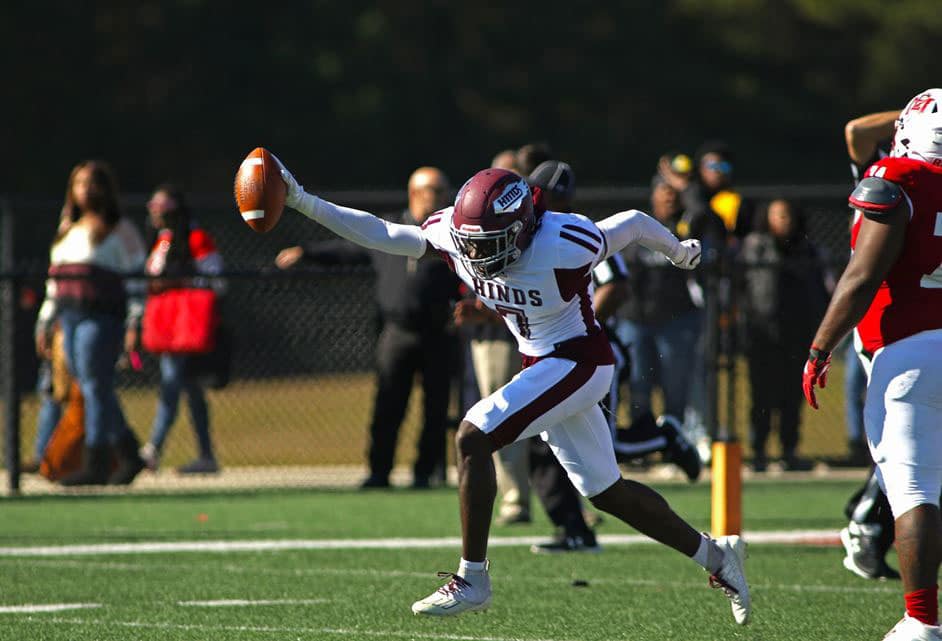 Saturday’s game against the Lions marked the first playoff game for the Eagles since 2017 and the second appearance for Larry Williams at head coach.

“Our guys played so hard,” head coach Larry Williams said. “You can’t win if you don’t believe in each other. It was a gut check, and I’m so proud of our guys. We need some support in Senatobia for the championship game next week.”

The opening quarter was owned by the Eagles after the Lions missed a field goal and the Eagles forced two turnovers. Freshman defensive back CJ Johnson (Greenwood) took a Jamari Jones pass to the 64-yards to the house to open the scoring. Ben Duncan’s (Florence) extra point made it 7-0 Eagles.

East Mississippi opened up their 41-point game with a Peyton Rodgers 22-yard field goal at the 12:28 mark in the second quarter of play.

The Eagles would quickly answer on a six-yard touchdown run by Jeffrey Pittman (Taylorsville). This scoring drive was set up by a 47-yard kick return by Jaiden Burns (Canton) and a 38-yard completion from BeSean McCray (Orlando, Fla.) to Tabashi Thomas (Douglasville, Ga.). Duncan’s point after was good, giving the Eagles a 14-3 lead with 10:36 left in the first half.

The Eagle defense then forced a Lion punt, but the offense stalled on their next possession. The Lions were able to get the ball back deep in Eagle territory after sophomore punter Houston Smith (Flowood) was swarmed by the Lion punt block unit.

Needing a big stop, the Eagle defense forced their third turnover of the game when Jamari Jones fumbled the ball right before he crossed the goal line. CJ Johnson came up with the recovery, which was his second turnover of the contest.

“It was a solid night for our guys,” secondary coach CJ Hampton said. “This big day for our defensive backs is proof that our preparation is starting to pay off.”

To close out the first half, the Lions forced an Eagle punt and tacked on another Peyton Rodgers field goal to cut the Eagle lead to 14-6 at the half.

The Eagles deferred at the opening coin toss, so they received the ball at the start of the second half. The drive stalled when Houston Smith was called out to punt.

East Mississippi came out of the gates hot in the second half when they took the ball 80 yards and scored on a 24-yard Jamari Jones touchdown pass. The Lions converted the two-point conversion and tied the game up at 14.

Not the be outdone, the Eagle offense answered on their first play from scrimmage when BeSean McCray found Kaleb Mosley (Louisville) on a 44-yard touchdown pass. Duncan’s point after gave the Eagles a 21-14 lead with 7:45 left in the third quarter.

These two touchdowns by Hinds and East Mississippi opened what would be a high scoring second half.

The Lions would tie the game back up at 21 when Jamari Jones found Zach Patterson on a four-yard touchdown pass. The Eagles got the ball back and were driving when the third quarter ended.

Hinds drove 60 yards after the Lion touchdown and scored on a Jeffrey Pittman one-yard run. Ben Duncan’s extra point made the score 28-21 in favor of the Eagles.

The Eagle defense managed to force a three and out on the next possession. But, the Eagle offense couldn’t get anything going after a fumble was recovered by East Mississippi.

East Mississippi then scored on their first play from scrimmage when Jamari Jones scored from 18-yards out. After the PAT, the score was tied at 28.

The Eagles then scored on a 12-play drive, capped off by another Jeffrey Pittman touchdown run. This run was from one yard out. Duncan’s extra point gave the Eagles the 35-28 lead with 4:15 left in the fourth quarter.

Going blow-for-blow, the Lions tied the game up with 50 seconds left in the fourth quarter. The Eagles then kneeled the remaining seconds off the clock and sent the game to overtime.

The Eagles would only need one period of overtime to seal the victory when Jeffrey Pittman scored from four yards out in the opening drive, his fourth of the day. Ben Duncan’s point after made it 42-35. Duncan was a perfect 6-6 on PAT’s on the afternoon.

The Lions would, however, answer quickly and score a touchdown of their own.

Left with a big decision, the Lions decided to go for two and get the win in the first overtime. As Jamari Jones scrambled right, his pass was tipped by Taylor Hunt (Flowood) and intercepted by Reginald Barnes (Pascagoula) to seal the 42-41 OT victory for the Eagles.

The Eagles head to Senatobia next Saturday to take on Northwest Mississippi Community College at 2 p.m.