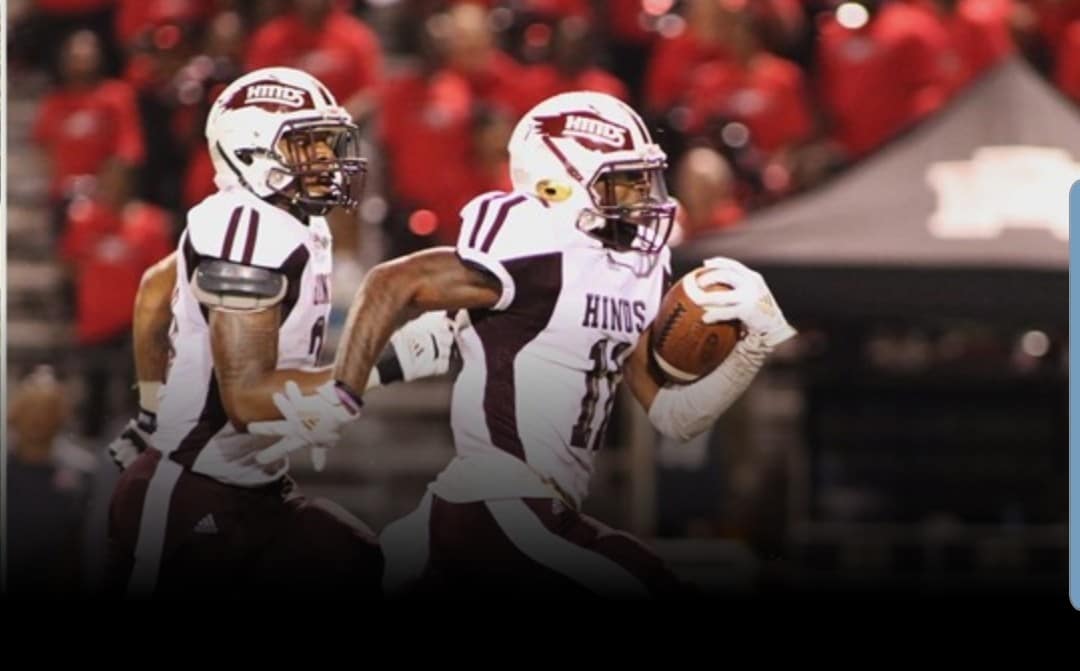 “This win is a program changer,” Hinds head coach Larry Williams said. “Everyone in our locker room believed we could do this. They played together like a family and made some big time plays when it mattered the most. I am so proud of my team and my coaches for all the hard work they put in from the start of camp ’til now.”

The Lions came into the game ranked No. 1 by the National Junior College Athletic Association (NJCAA) and were riding a 17-game winning streak. The Eagles, though, were unfazed and showed they came to play from the get-go when Jonathan Jordan, of Greenville, intercepted a Lions pass on their opening drive. Jordan’s interception gave the Eagles good field position, which they converted into three points when sophomore kicker Carson Flumm, of Crystal Springs, connected on a 22-yard field goal with 11:36 remaining in the first quarter.

EMCC would respond on their ensuing drive with a 28-yard touchdown pass. The Eagles blocked the extra point leaving EMCC with just a three-point deficit with 8:06 left in the first quarter.

That deficit would not last long as freshman Jakarius Caston, of Natchez, made his Hinds debut one to remember by returning the EMCC kickoff 98 yards for a touchdown. The huge kick return ignited the Hinds crowd and gave the Eagles a 10-6 lead with 7:49 remaining in the first.

Once again, EMCC answered right back with a four-minute drive capped off with an 18-yard touchdown pass, which gave the Lions a 13-10 lead. That score would remain the same until the second half as the second quarter proved to be a defensive skirmish.

The third quarter started with a Hinds fumble that led to good field position for the Lions. The Eagles’ defense held and forced EMCC to kick a 27-yard field goal. That field goal gave the Lions a 16-10 lead with 10:43 remaining in the third quarter.

The defensive battle continued until sophomore sensation running back Don Ragsdale, of Pisgah, capped off an 11-play 39-yard drive with a one-yard touchdown run. The “Ragsdale rumble” gave Hinds a 17-16 lead with 14:56 left in the fourth quarter.

The Eagles defense, led by first-year defensive coordinator Kevie Thompson continued to shine when DeMario Nichols, of Pearl, intercepted the Lions pass in Hinds territory and returned it 75 yards for the touchdown. The pick-six gave the Eagles a 24-16 lead with just under three minutes left in regulation play.

EMCC’s last chance at a comeback was thwarted when Hinds defensive back Jataquist Sherrod, of Macon, made a fourth down tackle securing the 24-16 victory.

Special teams and defense were the difference makers for Hinds as they blocked an extra point, returned a kickoff for a touchdown, forced six fumbles – recovering one of them – intercepted three passes, and returned an interception for a touchdown. The Eagles also had 198 return yards between five punt returns and three kickoff returns.

Hinds will look to keep their momentum rolling next Thursday when they take on the Mississippi Delta Community College Trojans (0-1) on the road in Moorhead. Kickoff for that contest is scheduled for 7 p.m.

Follow @HindsCC_FB on Twitter for highlights and updates throughout the 2019 season. Eagles football games are broadcast live on WJMF 87.7 FM and are streamed live at hindsccsports.com.