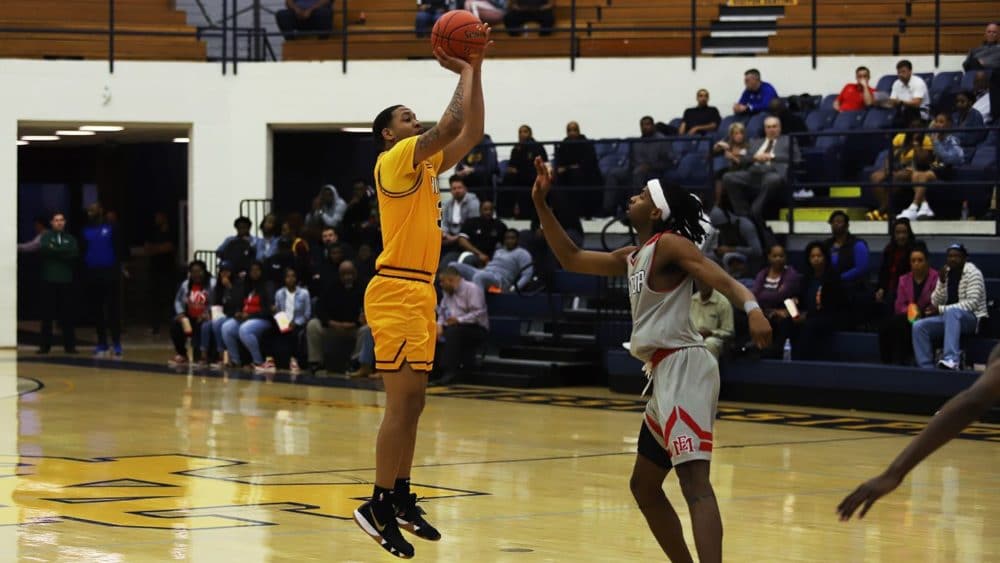 For the first time in a decade, the Hinds Community College Bulldog basketball program has a victory in the NJCAA Region 23 Tournament.

The Bulldogs defeated the East Mississippi Community College Lions 70-64 Tuesday, March 3, in a back and forth affair.

“This is a big win for our program,” said head coach Yusef Fitzgerald. “We are going to enjoy it tonight, but our sole focus is our next game,”

The first half of the game was a low-scoring defensive battle that saw multiple lead changes. Within the first five minutes, Hinds jumped out to an 8-2 lead before EMCC clawed their way back in and tied it up at 14-14 with 12 minutes left in the half.

The Bulldogs regained a three-point lead (22-19) with eight minutes remaining before EMCC took a four-point lead (27-23) with under 10 seconds left in the half.

Kejuan Clements sent Hinds into the locker room with some momentum as he drove the length of the court and connected on a fade-away buzzer-beater to cut the EMCC lead to 27-25 at the end of the first half.

In the second half, EMCC held a one-possession lead for about 12 minutes before Peyton Taylor drilled a corner three-pointer, giving Hinds a 50-48 lead with eight minutes left in regulation.

It wasn’t until Dontrell McQuarter hit a three-pointer with 45 seconds left that Hinds took a two-possession lead (66-62). EMCC quickly responded on their ensuing possession to cut the Hinds lead to just two points.

Leading 66-64 with eight seconds left on the clock, McQuarter connected on a heavily contested three-pointer, which gave Hinds a 69-64 lead and put the nail in the coffin for EMCC.

With the 70-64 win, Hinds improved their overall record to 16-8 and advances to the semifinal round of the NJCAA Region 23 Tournament.

Hinds faces off against the No. 2 ranked Pearl River Community College Wildcats (23-0) Thursday, March 5, at 3 p.m. The semifinal matchup will take place inside A.E. Coliseum on the campus of Mississippi College in Clinton, Miss.

The game will be live streamed at https://www.hindsccsports.net/menu

Fans can also follow @HindsCC_MBB for updates and highlights throughout the contest.

Gators’ season comes to an end with a loss to Brookhaven