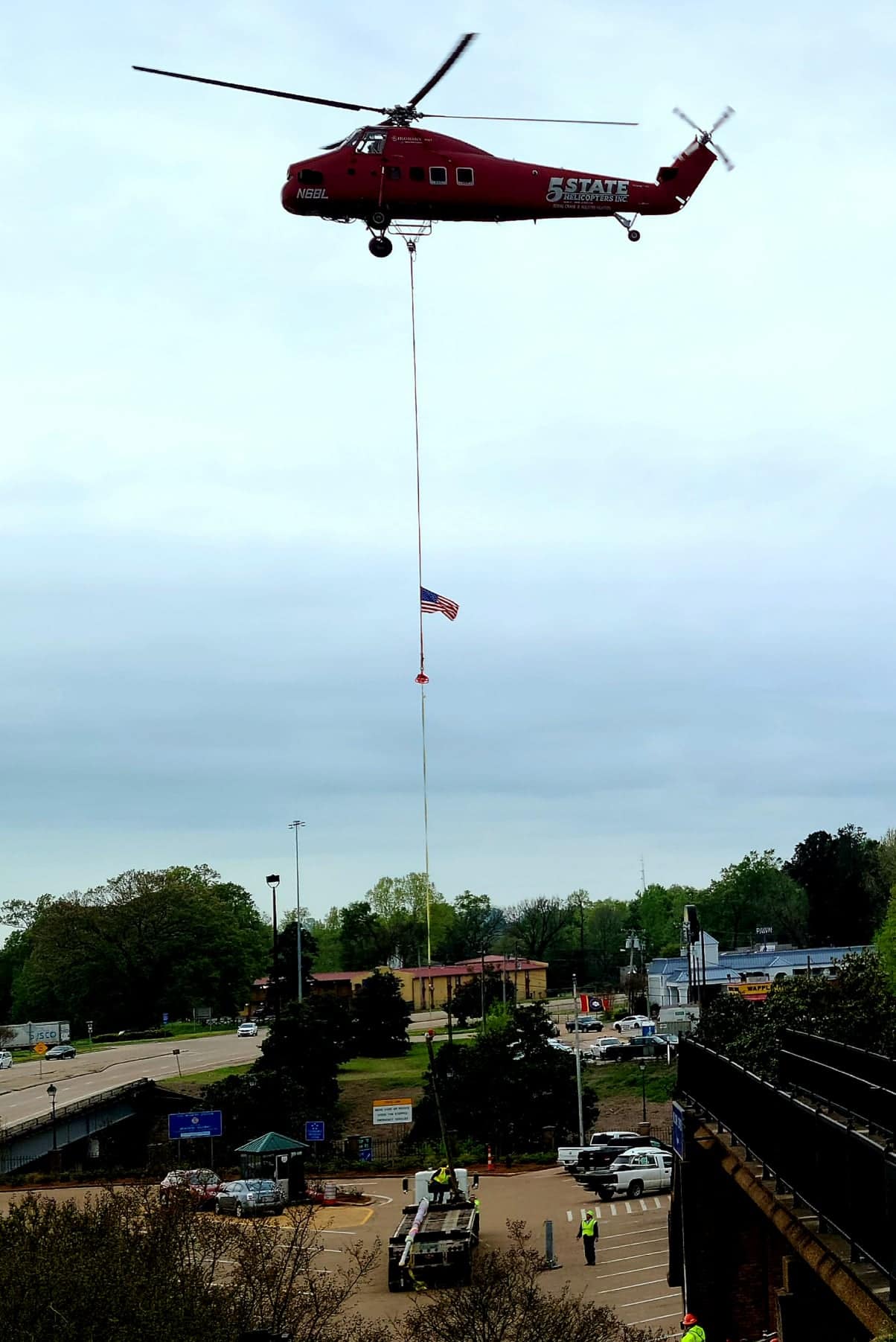 5 State's Sikorsky S-58T hovers over the parking lot of the Mississippi Welcome Center. The small flag in that photo has traveled with pilot Drew Smith on two tours of duty (photo by David Day)

Several years ago a traveler from Arizona contacted Highway 80 Bridge Superintendent Herman Smith and asked why the flag on the old bridge was not at half mast to honor fallen Senator and war hero John McCain. Smith had to explain to the tourist the old flag pole was not designed to do that. The ancient pole has been there long as anyone can remember and has never gone half mast. The issue bothered Superintendent Smith a lot. “Thousands of people cross that bridge every day and we should be able to honor our fallen heroes with that flag on that bridge,” stated a resolute Smith, “so I had to formulate a plan.” 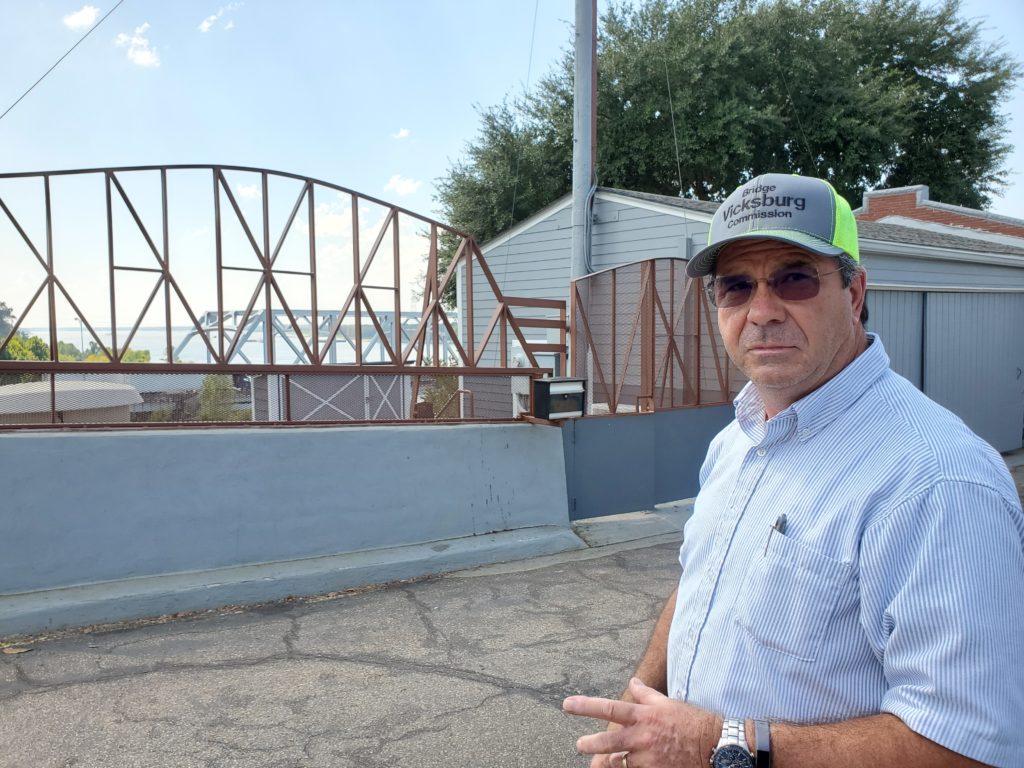 Superintendent Herman Smith and his wealth of knowledge formulated a plan to replace the flag pole on the Highway 80 bridge(photo by David Day).

The number of resources that ended up being needed to replace the aging and inadequate flag pole was daunting.

Smith knew his team, under his direction, could do most of the job but the 60-foot pole had to come down and a new, 70-foot pole had to be installed. For that to happen, experts were going to have to be called in. 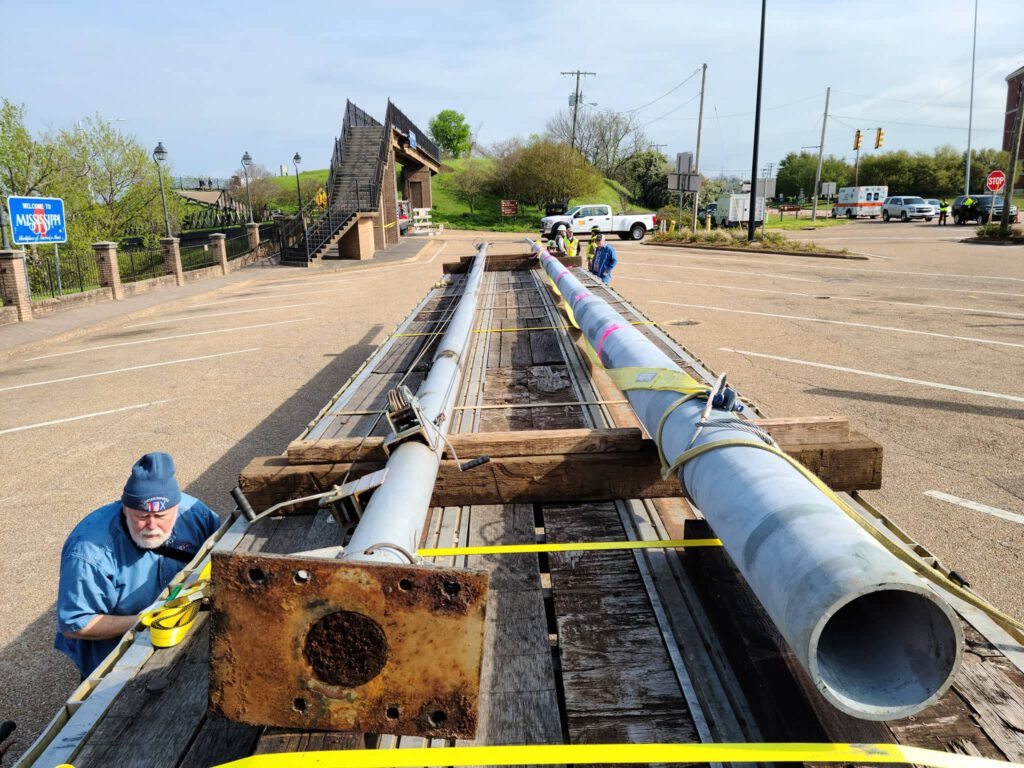 The two poles. The old on the left was installed decades ago (photo by David Day).

After planning, coordinating and budgeting for a very long time, Smith came up with the plan that included involving the highly specialized team at 5 State Helicopters. Shawn Harris, owner of 5 State, has been doing heavy lifting with helicopters for 15 years. His fleet includes two Sikorsky S-58T’s, a UH 60 Blackhawk and an Airbus BK117. For this job, Harris chose the Sikorsky S-58T. Heading up the team was Pilot Drew Smith, along with crew Susan Bitors, Omar Sepeda and Bill Tavella.

Pilot Drew Smith is one of a few select people on the planet that can do what he does. 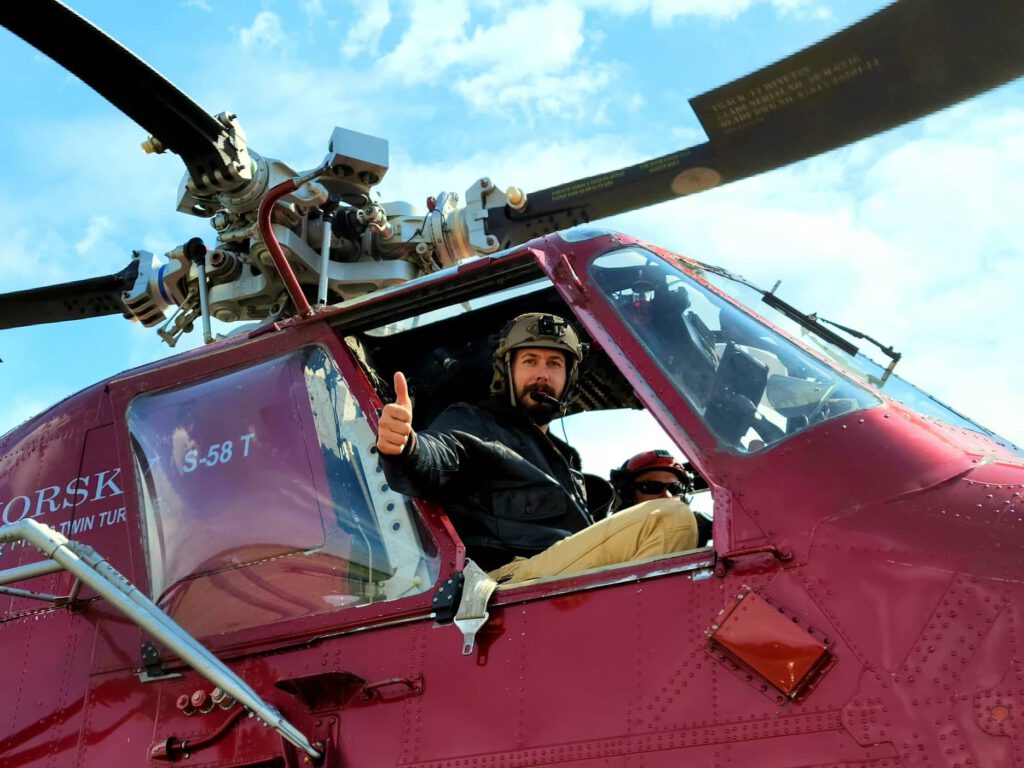 Captain Drew Smith, 33, with 5 State Helicopters has been doing this specialized kind of flying for 4 years(photo by David Day).

Pilot Smith and the team flew a 2500 pound flag pole and threaded the 70-foot flag pole onto a base while hovering 200 feet over moving water. Pilot Smith explained, “you know how when you’re sitting at a stop light and the car next to you inches forward and you think you’re moving? That is what the moving water does to your sense of perception. So, today, I focused on Omar’s neon gloves as my focal point.” He did all that while flying a large helicopter 200 feet over moving water, keeping the helicopter motionless (while tilted 30 degrees to the right) and leaning out the side window as he moved the 70-foot flag pole literal millimeters to line up with the base and posts.

The team from 5 State Helicopters were perfect. 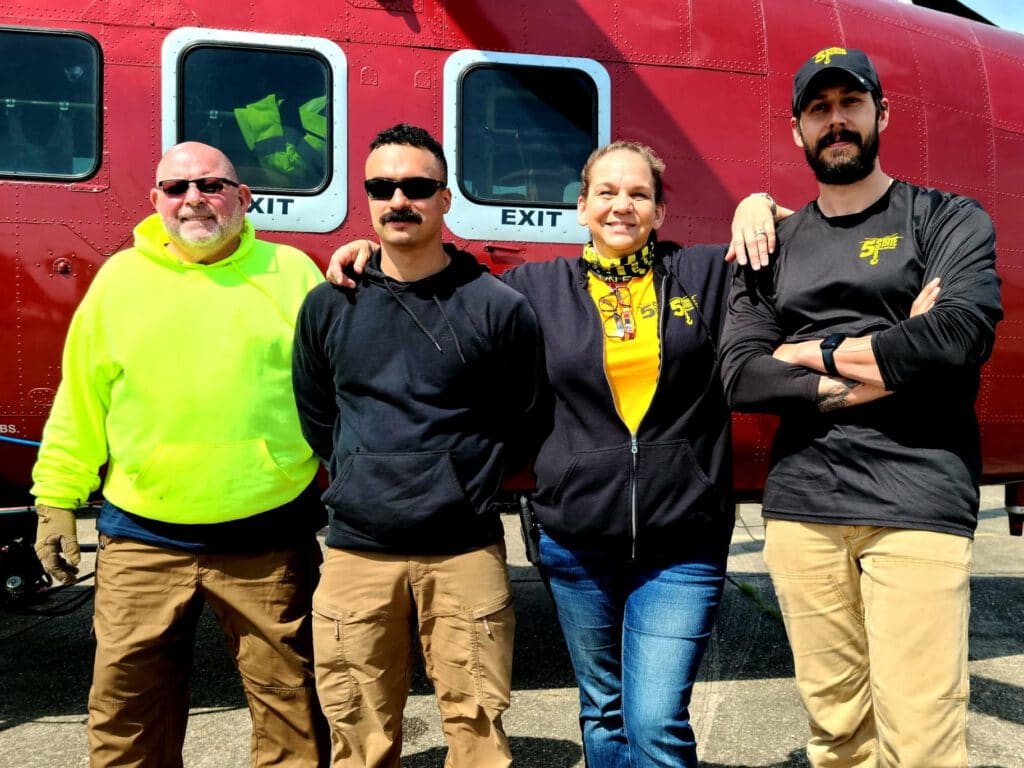 Each person on the team had a job and each one of them were very good about making sure the curious onlookers were included in the information flow. Most of Monday was spent planning for todays removal and installation. The original plan was for the helicopter to transport from the airport to the bridge. However, that would mean authorities would have to close the interstate every time the helicopter crossed it. Officials with 5 State indicated the parking lot of the Welcome Center would be large enough for the helicopter to land and for the several trips needed to remove and install the poles.

The Welcome Center is closed today so the parking lot can host the 5 State crew. 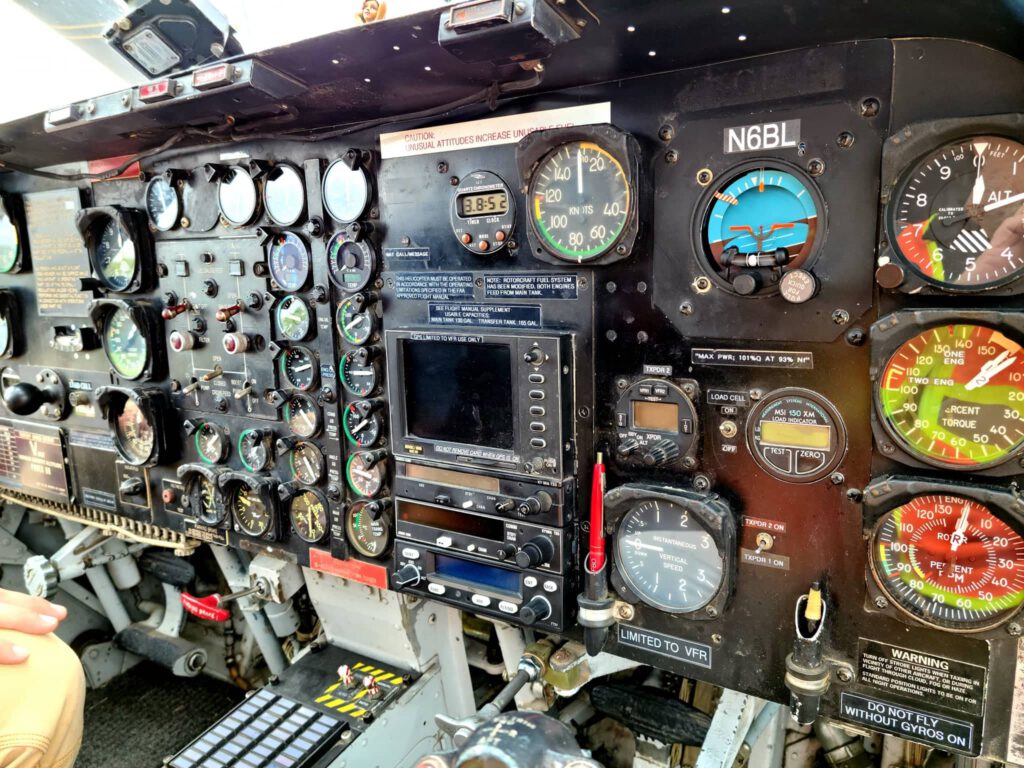 The cockpit of the Sikorsky S-58T is owned by 5 State. (Photo by David Day).

The City of Vicksburg police directed traffic with Chiefs Milton Moore and Bobby Stewart personally on the task.  Fire Chief Craig Danczyk was on the scene along with 43-year veteran Henry Williams. Warren County Sheriff Martin Pace had two crews in the water including Investigator Sam Winchester along with specially trained rescue personal incase there was a need.

Chuck Tate and Warren County Fire Boss Jerry Briggs were there, with Tate in full turnout and a firetruck ready. Overseeing the safety operation was Warren County Emergency Management Director John Elfer and his team, including Tracey Porter and Reed Birdsong. “We spent a good portion of yesterday planning this event out. So far so good,” said an intense John Elfer.

All that planning paid off and thankfully those who serve Warren County and the City of Vicksburg had to do little beyond enjoy the show.

The new flag will be unfurled at some point on Wednesday depending on how cooperative the elements and equipment are in the interim. 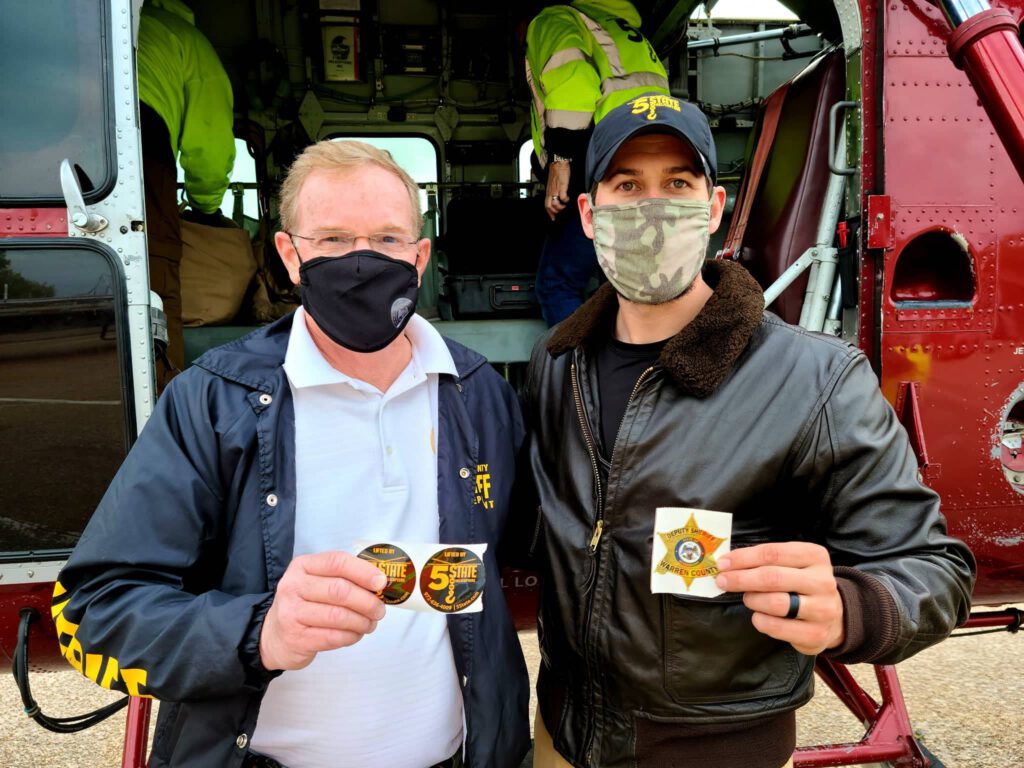 After the dangerous work was done, stickers and insignia were exchanged by the agencies on hand. Here, Warren County Sheriff Martin Pace and Pilot Drew Smith pose with theirs. (Photo by David Day).